"Just Listed" in the Strib just reported that this project is a go.

Is it just me, or will this project have a yellow tint to the building?

Is it just me, or will this project have a yellow tint to the building?

I think that's just the rendering. If you look at the rendering, the base of the Nic parking is also a yellow tint. Perhaps it's a sunrise representation for when the earth's axis tilts and the sun rises in the north? 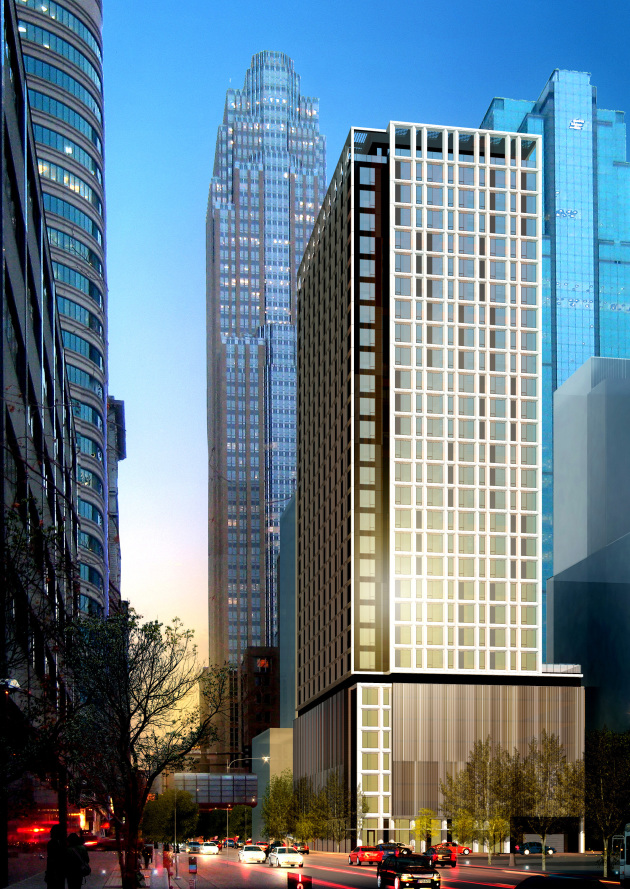 Maybe that is from the sun. Hard to tell what color it will end up being from this picture. The only thing that is for sure is the white boxed grid along the building I suppose.

Walked by during lunch today. A group of about 8 suits were posing for "groundbreaking" photos with sledgehammers and pick axes. The photographer was taking quite a few pictures of the group. At the same time workers were taking jersey barriers off a flat bed and lining them up in the alley and a survey crew was working. The contrast between the workers moving the barriers and the suits with their safety vests and hard hats posing for photos who had arrived in a limo bus with a bar was interesting to watch.

Very exciting to see this take off so quickly. Obviously, a buyer (or maybe just a partner?) is a great motivator so Mortensen can decrease their risk, and hopefully increase their profit. Seems to be a similar approach to what they did with the Hampton Inn.

This article about 4Marq has a few fun tidbits about the Ritz and Nicollet Hotel blocks. Nothing new to us, but it's nice to read if only for the reinforcement of the rumors.
The problem with being an introvert online is that no one knows you're just hanging out and listening.

wish we had more than just two renderings. this is a 30 story building.

http://www.ci.minneapolis.mn.us/www/gro ... 106952.pdf
This does contain some other visuals of the building.

Those metal panels are simply horrible. Anyone remember the old parking lot across where the new Federal Court House is? Ugh!

by Minneboy » June 10th, 2014, 9:49 am
Those metal panels are simply horrible. Anyone remember the old parking lot across where the new Federal Court House is? Ugh!

Not saying it won't be a dog, but I think based on the few vague renderings that we have seen, it's a bit premature to start blowing the horns of doom.

One of those moving metal sculpture walls like the parking lot over by the new Twins stadium would be preferable.

It's decent enough but not great. It's a infill project and wall building along Marquette and it fits that role fine. The architects did attempt to make the exterior have some depth, color , and variety in texture which will probably turn out fairly nicely. The highly sculptural pre-cast concrete skeleton or cage for the façade should be an interesting departure from a lot of the newer housing projects we have seen. The perforated multicolored panels for the garage will play off the light inside the ramp and I suspect will be very cool looking at night. My only gripe is the plain boxy shape and massing which gives the building no sense of drama or character in that respect. Even some slight variation would have been nice. At least it's a bit more slender than its chubby neighbor Nic on Fifth, and this project along with Xcel will help make Nic on Fifth's stubbiness less noticeable.

They're out tearing up pavement on 4th. Big shipment of steel on-site, presumably to retain the streets while they demo the ramp. A couple smaller cats onsite, I'd expect a pile rig soon.

I love the pile of brush across 4th Street blocking the empty surface lot!

The street level along Marquette has a great pedestrian orientation with the tall large windows. You can see the ramp's decorative perforated panels have depth with a corrugated, multicolored pattern. Should look very nice when walking along Marquette.

The street level along Marquette has a great pedestrian orientation with the tall large windows. You can see the ramp's decorative perforated panels have depth with a corrugated, multicolored pattern. Should look very nice when walking along Marquette.

Agreed, I love it! It's amazing to think about how much this entire square block will be vastly different when all the development is built! Here's hoping the Ritz Block & the Nicollet Hotel Block have the same fate!

Add some animated LED lighting to the metal panels and I'll stop complaining.

how annoying would that be to the residents though?

how annoying would that be to the residents though?

I live in Soo Line and have 100 watt lamps right outside my windows that are on all night... I think residents can put up with anything.
i talk too much. web dev, downtown. admin @ tower.ly
Post Reply
836 posts