maybe they are building a public ramp as a part of the development? Otherwise, I can't see why they need even more than 2 spaces per unit.

*edit* The star tribune article says some of the parking will be for the retail spaces, so there's that

Residential parking is 645 stalls for 360 units, or 1.79 stalls per unit. The remainder are some for retail (20), some for guest parking (5), and a few more for the neighboring buildings (72 for Miller Meester, 17 for McKeeson Building). I'm thinking that because these are condos and thus maybe on average targeted at more families (married couples, maybe 1 kid) and/or older professionals (ie more wealth and demand for owning a car even living downtown), they want to get 2 spaces for some of the bigger units. I'm as big of a proponent of no parking minimums, and we've certainly seen other downtown developments build less than would have been required in the past, but obviously there will still be many that build a lot of parking (especially since our region is quite sprawly jobs-wise and for a while much of that won't be accessible by transit).

The fact that so much parking being built here is proof that parking minimums aren't necessary. I'm impressed that they're only going down 1 level for parking, that will save a pile of money versus going down 2 or more.

Edit: As if anyone is going to read this 1 week and a half later, but it turns out there's actually 4 levels of parking on the plans, I'm just bad at reading.
Last edited by FISHMANPET on February 4th, 2014, 6:24 pm, edited 1 time in total.
Peter Bajurny
peter@bajurny.us
@FISHMANPET

I added a few floors set back and a crown on the taller building. 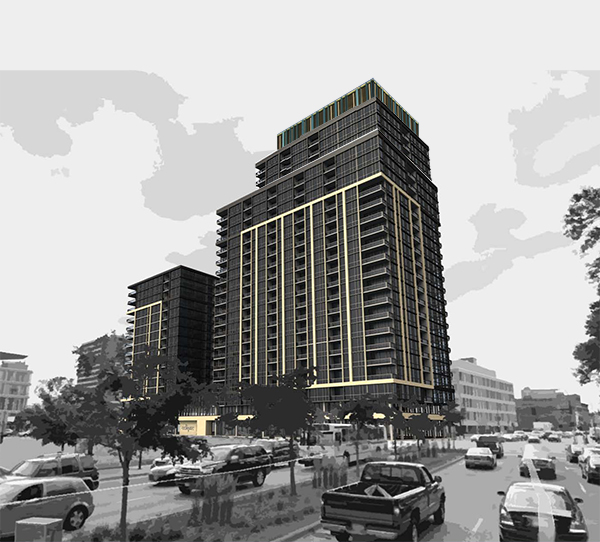 I actually kind of like the color, it'll be a stark contrast to the buildings around it; I've had enough of the brick, kasota stone, and silver aluminum in projects lately. I also like it better than the previous version of this with the green glass and no balconies. As stated before, the challenge will be making the ground level inviting. I'm guessing Whole Foods is extatic about this proposal.

This will require a lot of presales to get off the ground. Here's to hoping that Stanton is right about the condo market *clink*
Q. What, what? A. In da butt.

I also think the dark color and gold trim provide a needed contrast to the lighter colored concrete and stone dominating so many of the other downtown buildings. This is a site that has crying out for development for the past 20 years and potentially marks an architectural counterpoint to the Whole Foods development across the street.

I was a fan of the previous iteration of the Eclipse with it's green-glass towers but I'm glad to see something moving forward on this site and encouraged by the addition of foot traffic this promises to bring to the area.

Now how great would it be for a skyline changing tower across the street next to the library?

I'll say that I preferred the green glass proposal of a decade ago. This unfortunately reminds me of Bridgewater revisited on steroids. This project needs some more work and fine turning!!

The original proposal was much better. The sad thing is we are putting up all this subpar residential architecture on some of our most prominent sites downtown. Not good.

I always think it best to consider the outcome if only phase I of a multi-phase project gets built - it seems to me that later phases often get dumped into the dustbin for a variety of reasons. With that said, it would be great to see this site developed. Those are some *very* boxy towers, certainly not pretty and this is a fairly prime location, but despite that it's sat undeveloped for a while. The 20-story tower, IMO, is much uglier than the 16-story tower, and so while it would be a suboptimal outcome from a land-use perspective, I actually think I'd like this project better as just phase I. The other thing is that if the podium is built in phase I to accommodate a 20-story phase II tower, perhaps the second tower will be slimmed down in the interim, which would be a good outcome.

These are surprisingly large units - I know Shamrock likes large units but these are still very large - lots of units in the 1500+ space and almost all the rest in 1100-1500 space. If these are condos and not apartments, it's going to be pretty big units for this location - clearly not meant for young unmarried aspiring business folks. Obviously demand downtown is more diverse than it was even seven years ago, but I still have a hard time imagining uptake being very quick for units that big this close to the core, unless they're positioned as a value proposition a la Bridgewater. It will be interesting to see how demand goes for phase I, I could see it resulting in a slimmed down phase II which would be a good outcome IMO.

They're going to have a *lot* of excess parking before phase II is constructed.

I love it. Any building named Eclipse should be black. And this is coming from someone who is REALLY skeptical of black buildings. Actually Stonebridges blackness has started to win me over. I think the design is alright, great that it's broken up into two buildings and has good setbacks. I think everyone should probably do there best to forget pre 2010 buildings, they're already dated in their style. This is significant'y better than the likes of the nic on 5th or even 4marq. As long as the ground floor stays street friendly it's a home run. This isn't a 222... soooo much whining?

Great job on those added elements Seth. Much better looking that way. Wasn't the original concepts also curved? I remember the green glass.

Somewhat similar to the LPM tower at certain angles.

If you're going to alter and create your own images, make sure you are very explicit you have done so, some of us are using smart phones and haven't had a chance to open the PDF, otherwise the assumption is you've posted an image of the building actually proposed.

Have to imagine that much black will have a financial impact on the cooling bill in the warm months.

Do you guys not realize Stanton is crushing it right now? His MOAR SQ FT strategy fits the local market perfectly -- he'd be stupid to try and do anything but pump out more "shamrock boxes."
Towns!

The confusion of setback for stepback in this thread got me interested in the actual setbacks. There appear to be none, which isn't a huge deal on Hennepin because the sidewalks there are good-sized (roughly 20'). On Washington and 3rd a few feet of setback would be preferable, however, since the existing sidewalks are on the meager side at 12'. When you're going to dump 500 residents on a block it's generally a good idea to assume some of them will go outside sometimes (to be fair, I love yard-roofs like the one they're proposing). On top of that, this is a prime location for some exterior retail space, although at 12k sq ft I'm assuming they're not going for a cafe or anything.

What really sticks in my craw, though is the tacky 90s colonnade they're proposing for the Hennepin side. By making the portico no deeper than the columns, you just make a useless dead space that will just fill up with pigeon shit and gum wads. Either make the portico deep enough to actually walk through or set some tables out on, or enclose the columns.

Otherwise the building looks fine. Obviously we've already lost the battle for distinctive structures at this important intersection, so I guess ING will have to stand alone.
"Who rescued whom!"

If you're going to alter and create your own images, make sure you are very explicit you have done so, some of us are using smart phones and haven't had a chance to open the PDF, otherwise the assumption is you've posted an image of the building actually proposed.

Added a little note in case people stumble upon it in the future.

Here's a little before/after. Really just trying to prove that slightly better massing could improve this project quite a bit. 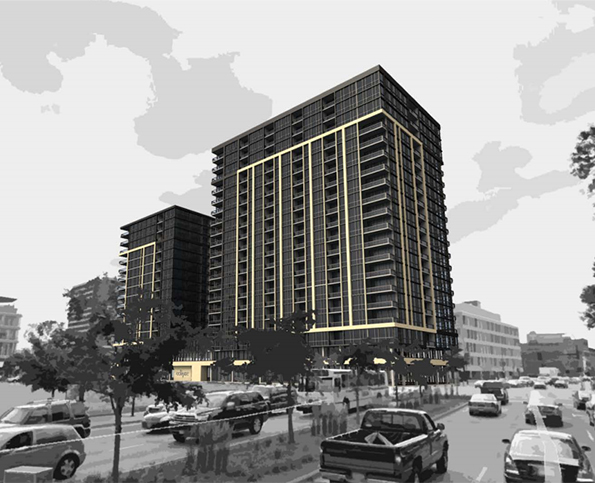