Well, plow Portland and Park through there as is (I'm assuming the funds to "prettify" the streetscape a part of the future park funding) and you're there.

I sent them an e-mail just to check if this is really a legitimate "On the Boards" proposal or not. The page has since been edited to 'Minneapolis, MN' instead of TN.

A lot of firms post projects they don't get awarded just to show that they can do such projects. I line this tower but I'm not holding my breath that they'd post it before the developer announces the project if they were the selected designers.

Just if anyone was wondering, it was marked wrong on the website. I emailed HPURBAN and they confirmed the block 70 is Minneapolis, Mn.

These look like buildings along the parking ramp liner parcel. Does anyone know what these buildings will be? 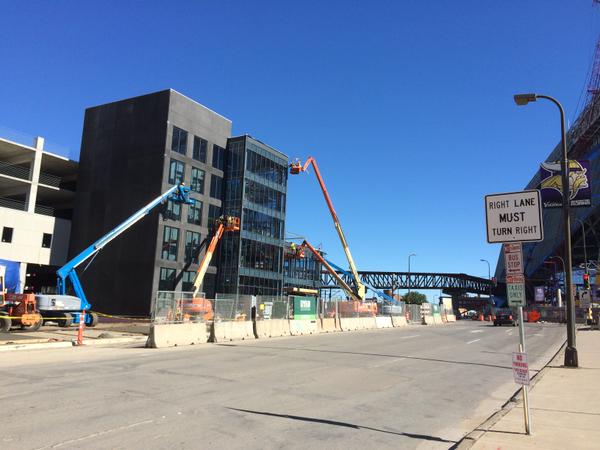 That's been my take passing buy. I don't think they are yet building anything beyond the functional part of the ramp.

Until they know what they are building they will not be pouring any footings. Not sure if they will just sod or if they will do crushed rock and let Food Trucks sell from there. I'm for the food trucks with WF next door and the stadium less than a year away.

This thing is dead, right? The deadline for Ryan to submit plans was 12/31 correct?

Pretty sure they have until 2017 now. Not sure, trying to find a file.

Ryan got the rights initially because they held out that they had a large hotel, residential, mixed use project in the pipeline. That deal was never as certain as was promoted. When it fell through, it should have gone to rebidding. The Vikings came forward with a solid proposal, a secure fund site, and an ability (and will) to initiate the project in a timely manner.

The Vikings were barely shown the door at those hearings, the same ones in which Ryan was given an extension on an inchoate promise to do something, but not in the near future, that would in any event be dramatically scaled back from what was promised when initially granted the rights .

That was just wrong in so many ways. Alongside the Nicollet Mall debacle, Minneapolis needs to undertake an inventory of best practices and bias in relationships that can now be shown to materially undermine the financial bottom line of city.

The Vikings proposal was horrendous.

I think everyone here would agree.

But was it better than a blank lot in front of a full-block parking ramp for the next 20 years? Face it, the ramp flies in the face of all city zoning laws thanks to the crappy deal the MSFA and state cut and the only redeeming feature of it was the potential development of this site.

The Vikings proposal was horrendous.

I think everyone here would agree.

Grant, I would respectfully disagree. The Vikings produced a proposal with a plan that included a tax revenue generation stream based on actual numbers that only paled next to Ryan's promise that proved to be unrealistic and which, I think all are aware, is not going to happen. As the links below indicate, the Vikings mixed use package also included a media center that would be fully appropriate for the location. Had they been allowed to bid, any shortcomings could have been ironed out - or not.

There is nothing about what the Vikings proposed that was out of line with the plans moving forward at other East cites. And even regardless, they should have at least been allowed to bid on a program that should have reopened to rebidding. So, not just the Vikings, but anyone who may have sought to submit a proposal.
Right now, there are zero tax revenue dollars coming out of the cite, an underutilized ramp (also not maximizing its ROI) because of it, and we are years away from realizing anything Ryan may come up with where Ryan was given a pretty open time-line along with pretty lenient terms that include not having to make the tax thresholds that got them the project to begin with. As noted, something (of substance) vs nothing. The City of Minneapolis was wrong here.

If I recall, didn't the Vikings effectively kill the original proposal by making outrageous demands on the parking lot and then, oh hey, make their own proposal?

Yes. Ridiculous restrictions on ramp use on game day killed the Ryan portal. Any other perspective is Wilf bootlicking.

Yes. Ridiculous restrictions on ramp use on game day killed the Ryan portal. Any other perspective is Wilf bootlicking.

Yes, "ridiculous restrictions on ramp use on game days" for a ramp that is being built by the MSFA, as part of the MSFA project in support of the stadium, primarily to facilitate parking and traffic flow on game days as its stated and specific purpose. Wow!

The Wilf fortune comes from being a real estate and development powerhouse. Ryan is in the business of the same as is Krause Anderson, Mortensen, ect. They all play hardball, they all play to win. On this issue, its not the Wilf's who have come up short.

Of course it would be "Wilf bootlicking" because everything they do is always presumed suspect. Everything they have done with regard their ownership of the Vikings has been reasonably open and positive. They negotiate hard, they negotiate to win, and they perform. This is the first ownership since the Bud Grant days before Mike Lynn that appears to be committed to building a franchise dynasty. They are also building a world class stadium and an A-list headquarters and training facility in Eagan. Their actions have spawned the largest redevelopment in recent downtown Minneapolis history.

It was Ryan that pushed for a change order in the ramp design and it was the MSFA that refused it. The ramp and the development rights were already completed and legislatively approved. The action that thwarted Ryan was the MSFA's - a state actor charged with overseeing the legislated mandates of the development plan as published and ratified by the State Legislature. As Ryan was the contractor that built the ramp, they not only had lead time, they had the actual development plans that could have enabled them to request a modification of the design during the approval period.

I am agnostic on whether or not the change order to create an additional axis point would have substantially undermined traffic flow at game time, but that is how the MSFA ruled where the MSFA agreed to the design requirements that Ryan was contracted to build based on traffic flow issues as analyzed in ad nauseam as part of the design concept - THAT RYAN AGREED TO.

Not only did Ryan not have a developed development plan (that promised a tax revenue stream in excess of other bids), it seems to have done so based on changes to the ramp it already knew was approved without such modifications where the period to make such recommendations had passed in which they were a party to the plans.

The Wilf's had every right to cry foul on the change order request (that the MSFA declined), they had every right to request a rebid when Ryan's plan proved to be vaporware, where the Vikings had an actual proposal - along with the capital resources to fund it, including $ millions up front, and the contractor to build it - and the City of MPLS was wrong to shut them (and other potential developers) out in those circumstances.

The Wilf's investment in the stadium along with their new facilities in Eagen not only makes them the largest investors in a Minnesota sport franchise, it may exceed what all other owners have invested combined. It is their investment in the stadium - which exceeds the public contribution - that triggered the largest development boom in recent downtown Minneapolis history - at least in the last 40 years - including the entire Downtown East project. It is the Wilf's actions that will make downtown Minneapolis the focus of the sporting world over the next few years. One doesn't have to be a "Wilf bootlicker" to give credit where credit is due and to point out that it is not they who have failed to perform - and then let completely off the hook.

If the situation were reversed, and it was the Wilf's who secured the development rights around the MSFA parking ramp where the City gave them an open ended pass in the face of substantive non-performance, people would be talking about legal action and an overly comfortable relationship, and not unreasonably so.

My problem isn't that I overly like the Wilfs, it just that I don't have a pathological dislike for them either. Its not the Wilf's pattern of behavior in this fact pattern that should be the one coming under scrutiny.

No one has received more welfare from the local governments than the Wilfs either. You are lying when you say the Wilfs contribution exceeds the public's.

The Vikes under the Wilfs are some dynasty, twelve seasons and one playoff win. Dominating.

You're factually incorrect in roughly ten different ways. It's not surprising someone who doesn't live in Minnesota thinks the Vikings are only party whose interests should be considered by the mfsa. Minneapolis taxpayers deserve consideration.

No one has received more welfare from the local governments than the Wilfs either. You are lying when you say the Wilfs contribution exceeds the public's.

The Vikes under the Wilfs are some dynasty, twelve seasons and one playoff win. Dominating.

When the Wilfs initially invested in the Vikings, it was supposed to be as a silent minority partner. Not expecting to be in a decision making role, they had a learning curve and lessons to learn - some of them the hard way. There was a cap to how much they would invest in a team until its status was confirmed. It was with the securing of the Vikings future in Minneapolis that it made sense to support the long-term interests of the team. Before that point, their greatest value was in selling the Vikings regardless of how good they were. When purchased, and owing primarily to the Metrodome, the Vikings were the least profitable team in the NFL. Since buying them, the Vikings have, I believe, over doubled in value.

The Wilf's haven't profited from "local government welfare," they would make money wherever they located the team - or sold them at a profitable market rate. Minneapolis was in competition with other locations that sought a franchise that would have secured the funds. The state's investment was the cost of business for a city (and state) to secure and support an NFL franchise. The MSFA owns the stadium, not the Vikings or the NFL. I don't have to like or even agree that this is how it should be done to recognize that that's what it is. The Wilf's saved the Vikings for Minnesota, often times in spite of Minnesotans, and the sporting world is starting to recognize them as not just an elite team on the field, but an elite franchise that, for the first time, actually puts their money where their mouth is.

Lied? Just check the numbers. When doing that, you might also want to check the net new tax revenue that will be flowing into Minneapolis coffers 7 to 10 years out owing to the Vikings decision to stay in Downtown East THAT WOULD NOT BE THERE OTHERWISE - at least not on the order of magnitude that is now foreseeable.
Post Reply
1055 posts