Those big styrofoam blocks are called geofoam. Basically it's lightweight fill, a lot a road and bridge projects use it where you have poor soils.
https://en.m.wikipedia.org/wiki/Geofoam

And a bunch of those were used on the staircase / entrance on the east side of the stadium.

Those big styrofoam blocks are called geofoam. Basically it's lightweight fill, a lot a road and bridge projects use it where you have poor soils.
https://en.m.wikipedia.org/wiki/Geofoam

Geofoam is also used as a weight mitigation device when seeking to put a garden, lawn, or a concrete surface above lower level - sub-terrainian structures. On the East Side, the foam was placed above the Stadiums underground structure and beneath the steps, the walkways, and gardened areas. It replaces dirt (where grass, gardening and walkways were build) and concrete (under the steps) because the weight differential is enormous - in places the differences could reach hundreds of pounds per square foot of surface space.

Of course, the pedestrian bridge is built on top of a parking ramp. Whether the surface space ends up being poured concrete, green space or a sculpted garden, the foam will allow for such sculpting while not putting too heavy a load of either dirt or concrete beyond the loads needed to establish the surface space (the 4 inches or so of poured concrete for a concrete surface or inches of dirt to support grass and plant growth). A square foot of geofoam between the garage surface and the end-state surface might be as little as 10 ounces. The dirt or concrete equivalent could be hundred of pounds.

The bridge is open, along with most of the plaza. 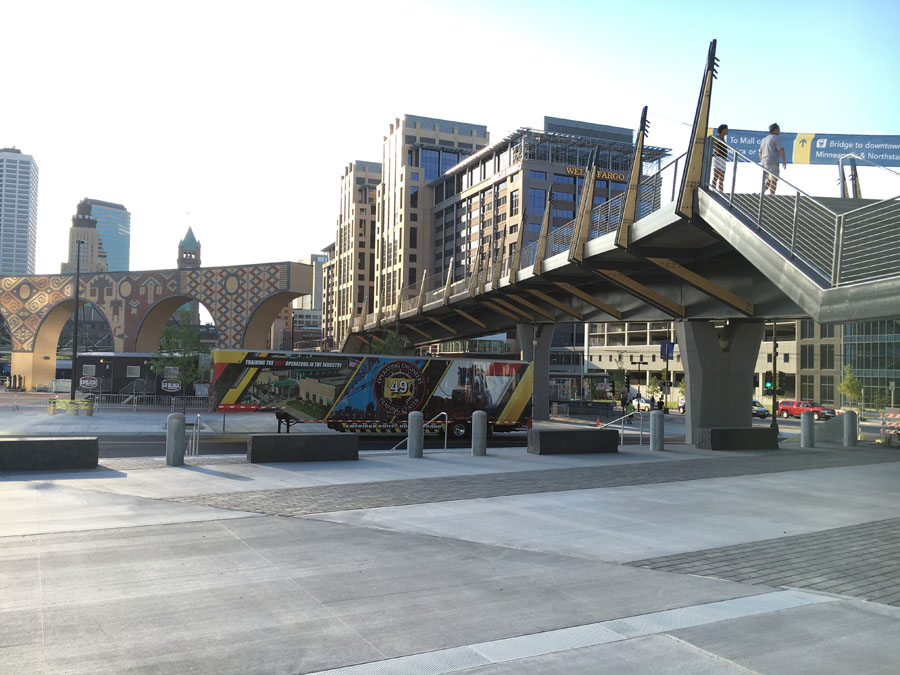 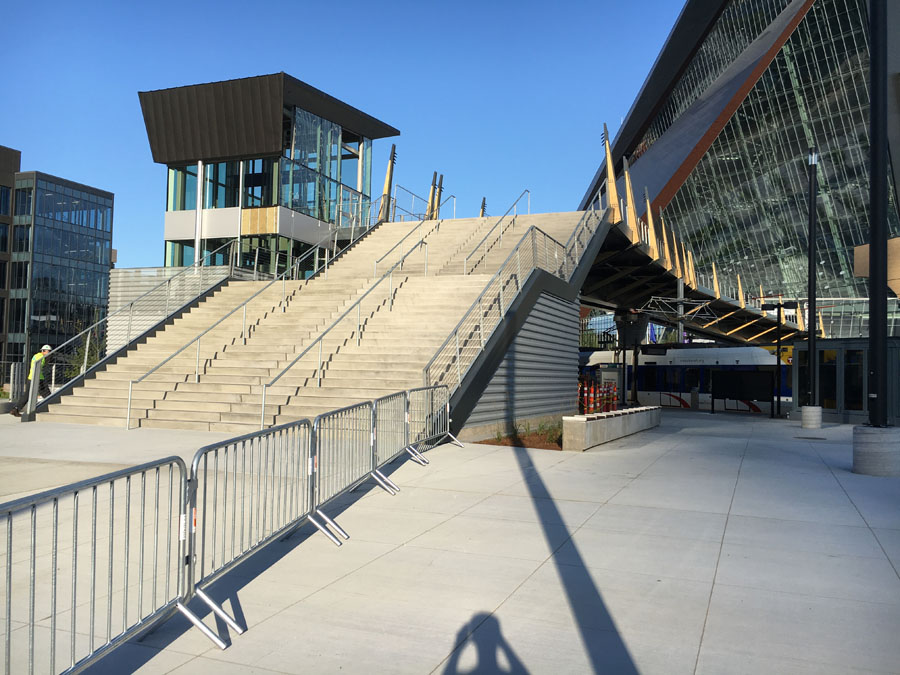 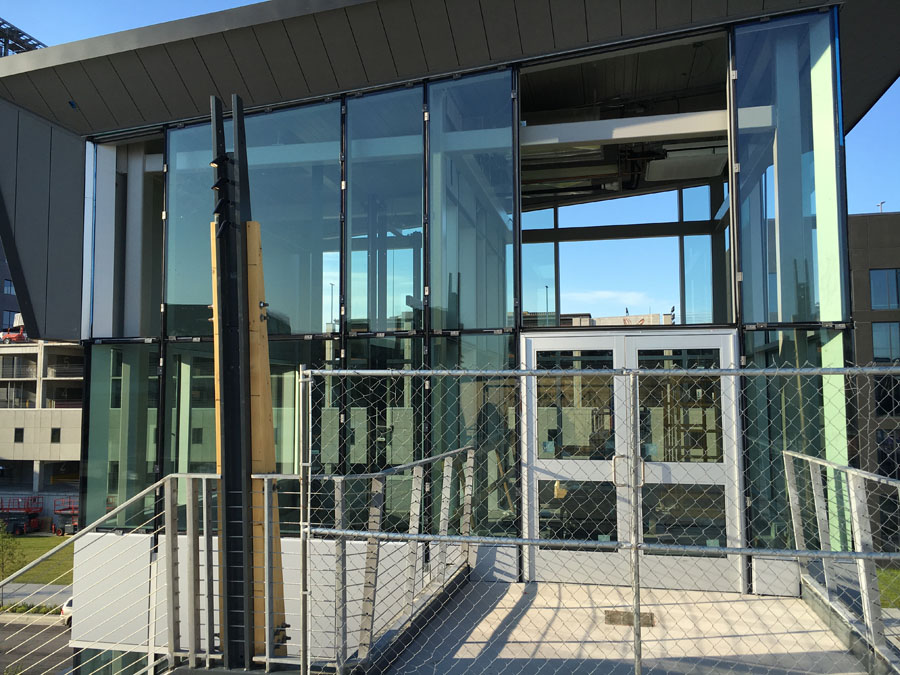 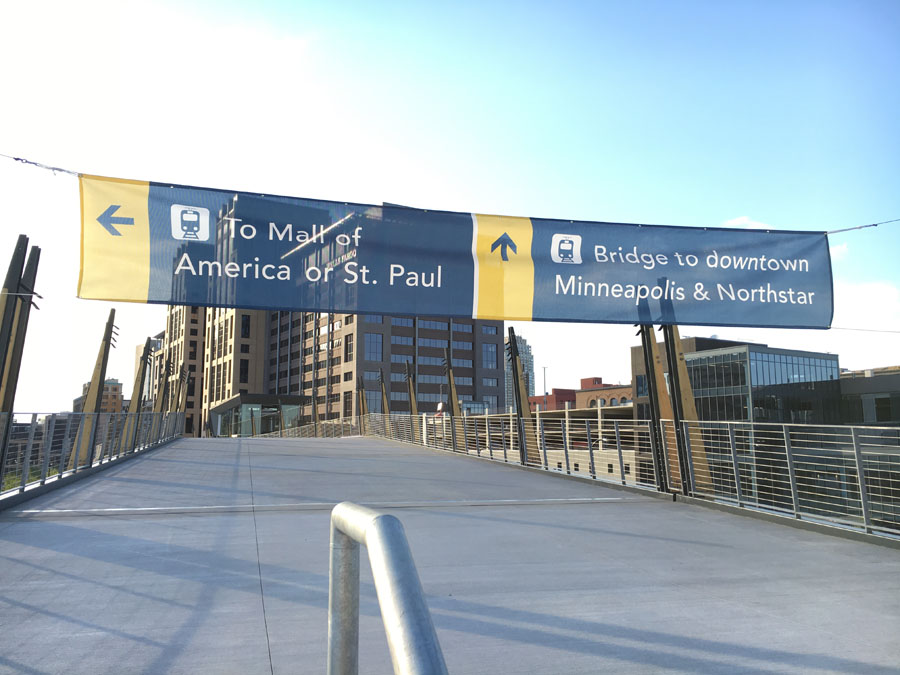 Looks like they're expecting a lot of transit riders for the Stadium's grand opening. 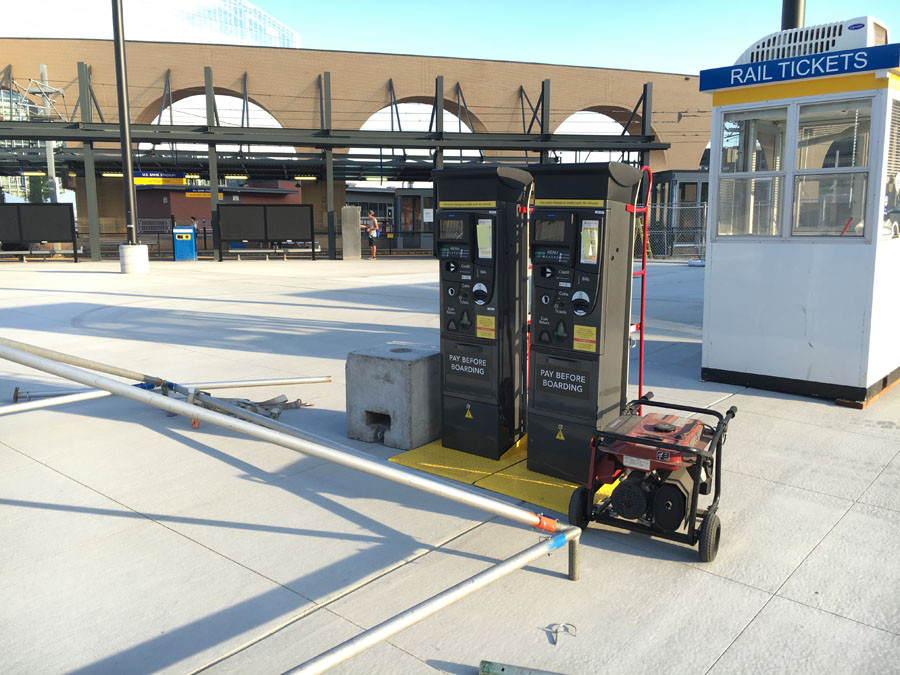 I rode a train to the target center lifetime arriving downtown at 9 am. Metro transit employees and officers are directing open house attendees to the ped bridge.

I went to the construction worker open house last weekend. The number of separate concourses and vertical circulation at the entrances are impressive as is the west view. I found the interior finishes to be of lesser quality than Target Field or Xcel.

Is the ped bridge done? Or are they adding a canopy? Looks awful right now, so hoping they aren't done. Stairs also emptying into the street is less than ideal.

Never had a canopy in the renderings. That's what $10 million (?) gets us today I guess. Now you can see why so many were, and still are, against the stupid thing. The empty out into the street deal will be fixed in the future they say.

I was actually favorably impressed by the pedestrian bridge. I can definitely imagine pre- and post-game, when the LRT area gets backed up, that it will be a very attractive option for people walking to the Commons or further into downtown.

And I thought the aesthetics of it were pretty cool too.

Not done yet. The elevators are still in pieces.
Q. What, what? A. In da butt.

I still can't believe that public money was used for this bridge. Gross.

I stood on the bridge for about 15 minutes during the stadium open house.
The majority of light rail riders did not seem to understand the bridge would help them cross the street, so they just walked over on street level.
Sad and ugly use of public $.

I still can't believe that public money was used for this bridge. Gross.

The Vikings paid for almost all the bridge and in return got signage rights.

Also, the necessity of the bridge concerns days when the LRT is fully engaged for game days and other large events.

Wrong. The Vikings paid for just over half of the bridge.
Joey Senkyr
joey.senkyr@outlook.com

I thought the latest deal, as of November, ended up at about 2/3 of the cost and 90% of the advertising revenue.

It is still an ugly POS. I am not even sure what the little wood/black points sticking up are supposed to be for. The only thing this is good for is taking pictures of the stadium and park/skyline.

Yeah I'm really curious about those wood pieces, I thought they were just support during construction, but they're still there. But also the bridge isn't 100% done yet either.
Peter Bajurny
peter@bajurny.us
@FISHMANPET

So, if I'm reading the posts correctly, you guys don't like the bridge?

I found the steps to be exceptionally steep.
Q. What, what? A. In da butt.

So, if I'm reading the posts correctly, you guys don't like the bridge?

Users browsing this forum: No registered users and 6 guests