Delivered just in time for the snow plows to smack into them!

But seriously, this glad they're finally stepping up to add some additional color and interest.

Finally! Are they the same round ones they used to use? Which are fine...just curious.

Looks like they're putting new mirrors on the light walk? Or something. They had it barricaded with plastic wrap on them. The old ones had issues? They weren't that old.

Looked to me like they're going to touch up paint the support structure and don't want to get overspray on the mirrored surfaces.

They've also put planters on the benches of the amphitheater in front of the Library, perhaps to try to prevent people from laying on them, but also have not removed the barricades around it.

Hennepin County is taking bids for a new coffee vendor in the library (I assume Dunn Bros’ lease is up): https://supplier.hennepin.us/psp/fprd_2 ... &utm_term=

Here's why Nicollet was never going to be a pedestrian only mall and do away with the transit buses. https://www.youtube.com/watch?v=-Tg9IMCKa5M

The reconstruction was completed after I moved away from Minnesota, and so my exposure to the new Nicollet has come on visits. As it has happened, I've never stayed directly in downtown, and so in particular I had not been able to experience Nicollet both during the day and at night.

That's a preamble to say that I was in town from Sunday to Tuesday and for the first time did stay downtown, and really for the first time ended up seeing Nicollet in a lot of different lights and moods. I was surprised how much my opinion of it changed, mostly for the better.

I think many of the concerns about the daytime grey-ness of Nicollet are still valid, especially in the winter, when the new trees are not blooming. But the holiday displays at Dayton's really liven up that block, and that makes me think that the greater part of the problem may simply be the buildings that front Nicollet. With actual activity on the Dayton's block and a merely non-terrible redesign of City Center, the street will start to feel way more colorful.

Even more so, I was impressed with Nicollet at night. I think the soft lighting that JCFO designed really is extraordinary. It keeps there from being any sketchy-feeling dark corners, but it doesn't glare. It allows for a dappled texture of light and shadow from the Loring Greenway to the Gateway. It lets the light spilling out from behind doors and windows, and the accent lighting highlighting trees and facades be the stars. All of this creates a nighttime streetscape that I found both welcoming and engaging. 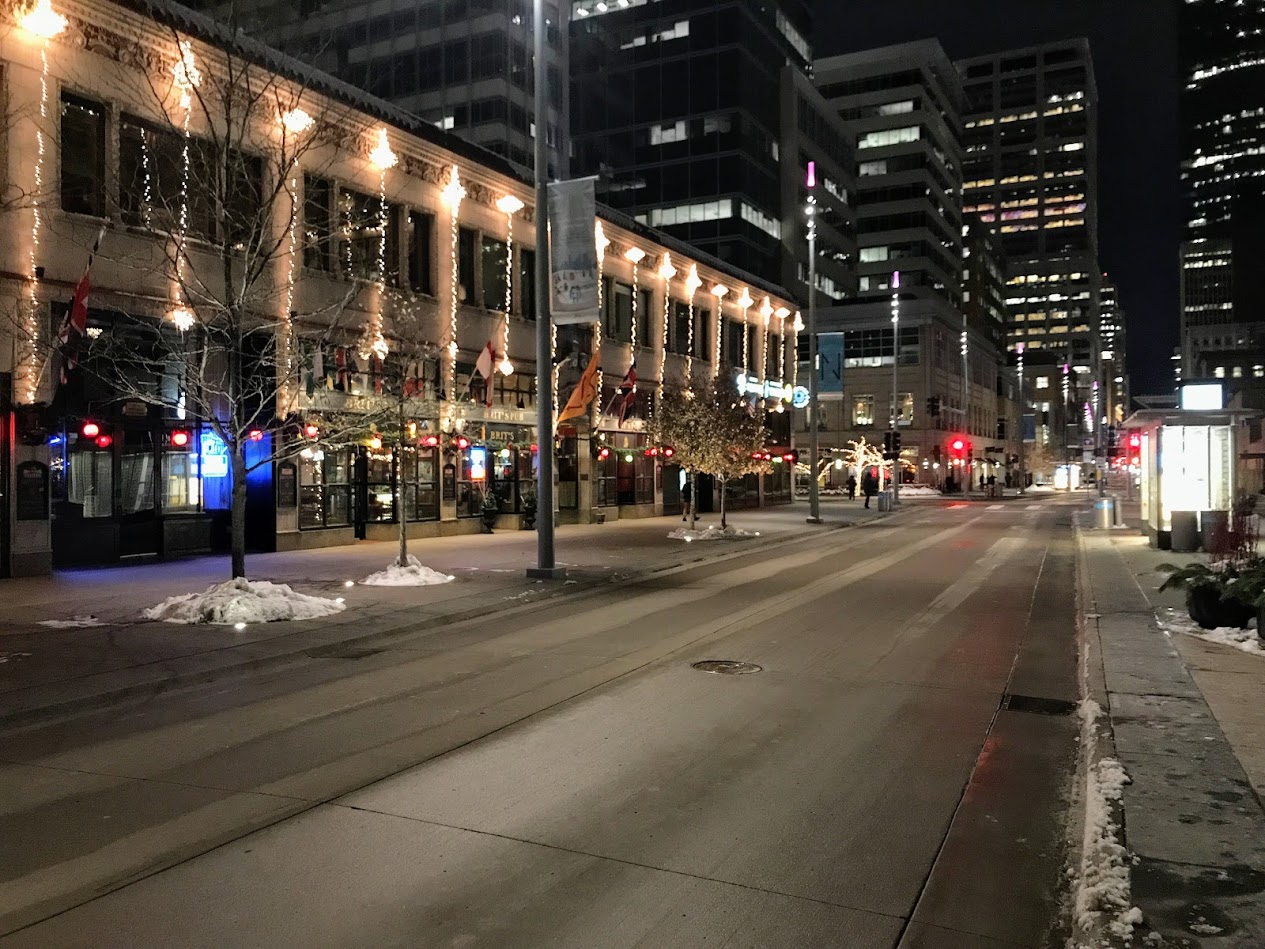 I've also wished before for bus service to more entirely from Nicollet to Hennepin when the latter is reconstructed, in large part because I do think that the buses take something away from the pedestrian experience, but I'm reconsidering that view because of how good the transit shelters along Nicollet are, especially at night, and especially in the winter. With their light and heat lamps, they stand out along the mall with the warm amber light of lanterns. They also ensure activity on the street, even in the cold, even late at night. I did not understand how much those shelters made the street feel, and I have a much greater appreciation for how the same effect can exist along other aBRT corridors as well.

Anyway, all of this to say that I'm officially putting aside my complaining about Nicollet. It's good now, Peavey Plaza is incredible, I'm a big fan of the Nimbus, and when Hennepin opens up so the bus traffic is a bit more balanced, plus the Gateway area finishes building, I do think it's going to be a real asset. It still needs a lot more people (someone tear down the old Walgreens building and put some high rise housing there), but I think the design has laid a better foundation for the street to shine than has often been given credit for.

Agree with most of your assessment of Nicollet Mall. However, right now I'm a bit peeved there's no seasonal lighting scheme spanning the mall's 12 blocks to give it a more festive, bright atmosphere for the holiday season and our darkest time of year. It currently looks pretty bleak and desolate at night with a couple exceptions. Confused as to why this is so. We are probably one of the only cities in America that has no public holiday light display on its major retail corridor.

Not sure what you mean, Mall of America has plenty of holiday lights...

Not sure what you mean, Mall of America has plenty of holiday lights...

Yeah , I guess there's no hope for the "other" mall. lol

Be nice to put a Christmas tree with lights on part of the half block parking lot across from the library which Opus owns. Otherwise what if DID got more businesses to have holiday windows like Daytons?

A comprehensive light display in the public realm ( i.e lighting up the trees on the 12 block stretch ) is what I'm referring to. It's actually up to the private businesses along Nicollet Mall to do more. The city does not publicly fund holiday light displays. As Nicollet Mall continues its revitalization with The Dayton's Project, City Center renovation, Gateway Project etc, there will probably be a more concerted effort to brighten up the mall in the holiday season/wintertime.

Ok but this is the article in reference
https://www.fox9.com/news/business-owne ... -holiday-s

^^Putting up lights on the trees/ light posts to give the mall a more uniform seasonal appearance would go far to brighten it up. I mean , even the trees on Nicollet Ave south of Grant Street have lights on them!

Many more business owners do need to step up to the plate. And there should be more coordination of effort with DID to have better funding for seasonal lighting. I'm hopeful it will improve once more of the vacant spaces along the mall get filled up.

I wholeheartedly agree. With Peavy Plaza finished they can do ice skating in the pool. Loring Park feels so out of the way.

I was hoping they'd move Holladazzle back the the mall when construction was finished.

An excellent idea. Even the 4 block stretch from the Dayton's Project to 12th street (to include Peavey Plaza and the Crystal court ) would make a great indoor/outdoor space for a Christmas Market. One of the main purposes of Nicollet Mall ( I thought) was to create an urban space/streetscape for event programming.
Post Reply
1427 posts

Users browsing this forum: No registered users and 9 guests