I wouldn't be surprised if it was less than that.

I'm not at all sure the department store is a model that can't work, but they always seemed like the worst of the big ones to me. Of course, they are also cheaper than Bloomies and Nordstrom too.

And for extra snark: think how great it will be when they convert it into more parking!

Sterling Bay is the coolest developer in Chicago. They are experts at developing old buildings into new ones. They are creating the new Google Chicago HQ in an old meat storage facility. They are very good at what they do, Awesome developers. I have a very strong feeling that they are going to upgrade the office space.

So Sterling Bay is no longer the buyer, correct? The TCB article indicates that CityCenter Realty is the current suitor

Sources within the group of downtown stakeholders briefed on Macy’s plans say that the company has most recently been negotiating with City Center Realty Partners, a San Francisco-based real estate developer and property manager with offices in Minneapolis. (City Center did not return calls for comment.) City Center’s purchase of the building has reportedly foundered as it negotiates with Macy’s over asbestos removal.

City Center is believed to be contemplating a redevelopment that would include retail at street-level and either office or residential space above, though there is skepticism among experts in the development community that the building’s massive floors are suitable for residential.

Interestingly, City Center Partners bought the adjacent Plaza Seven office tower in 2013 and sold it in 2016. Might've made some sense to hold it if they were about to buy/redevelop Macy's, no? One thing is clear - if City Center Realty is the buyer, they probably won't hold it for long. They will redevelop, reposition, etc. and sell the property as soon as they're able to get the return their investors expect.

I know we are sad but the redevelopment plans are sick. The design is in the SD phase. But it's a secret... soo...... That's it

If by 'sick' you mean a full restoration of the exterior, then count me in.
Q. What, what? A. In da butt.

It's that damn Gimbel's. They always had everything Macy's didn't.

I'm looking at this with cautious optimism. Not great timing with Nicollet reopening next year (Macy's should've closed a year ago, I guess), but this has to be looked at as one big step back, with the potential for several future small steps forward. The Nicollet facade cut up into several active storefronts would be a huge win, as would the reuse of the upper floor office space, putting more people in the "core of the core". Also, it goes without saying that the whole skyway situation will be better when it doesn't run through the middle of a store with limited hours.

We have a huge population boom happening downtown. Everyone knows retail follows rooftops. The downtown "traditional retail" scene has been dying a slow death for decades. Only a fool would think we are ever going back to what once was.

I guess my argument for why Macy's closing will be a good thing is this:

In the "retail core" of Nicollet Mall (5th to 10th), which mall-fronting spaces are even available for new businesses (retail or otherwise)? There's the small Renaissance Square spot, the former Sports Authority spot, the old Walgreens space, and honestly not much else, unless some of the restaurants (Newsroom, Zelo, etc.) were to close. Many of the buildings (esp. 2000s office buildings) just have bad frontages that isn't ideal for retail. There is simply no better location for new retail/service businesses downtown than the Macy's building. We gotta have a fire before the forest can renew. Retail will follow the rooftops. And we're adding "rooftops" (e.g. units) by the thousands.

If anyone has seen the dead mall series by Dan Bell on Youtube, you can understand why some of us think this might be okay. Macy's will probably be closing almost every single store within the next 5 years. The sooner the better.

If anything, this could help expand the Brit's/Local/Zelo/Newsroom effect northward, eventually helping the Nicollet blocks north of 5th get some patio dining.

In the "retail core" of Nicollet Mall (5th to 10th), which mall-fronting spaces are even available for new businesses (retail or otherwise)? There's the small Renaissance Square spot, the former Sports Authority spot, the old Walgreens space, and honestly not much else, unless some of the restaurants (Newsroom, Zelo, etc.) were to close. Many of the buildings (esp. 2000s office buildings) just have bad frontages that isn't ideal for retail. There is simply no better location for new retail/service businesses downtown than the Macy's building. We gotta have a fire before the forest can renew. Retail will follow the rooftops. And we're adding "rooftops" (e.g. units) by the thousands.

Well, I am also hopeful we see something with a little more thought in this space than a couple ground level retail spaces, and hopefully a new flush of things opening on Nicollet the next couple years. If it is actually something more interesting than an office building with 2 restaurants, I won't be so sad. Right now it is pretty rough though, there are actually a lot of vacant spaces on Nicollet in the stretch you mention! The entire corner of Ren Square, The Y is taking a couple of the Gaviidae spaces soonish...but there are still 2 next to that that are vacant, The smaller space next to the new walgreens (so the entire block of gaviidae aside from walgreens is vacant), Sports Auth, Gap space (will hopefully be Nord. rack soon), the old Walgreens, the old Dunn Bros space, the old Target commercial interiors space, the old Masa space...did I miss any? It is A LOT at the moment. Hopefully change soon! In any event, we are nearly certain the current buildings will remain, right?

Also, Macy's being gone should make it easier for Saks and Nordstrom's to survive.
Joey Senkyr
joey.senkyr@outlook.com

"Rip it down and build a HyVee!" -Regan Murphy, probably

"Rip it down and build a HyVee!" -Regan Murphy, probably

A K-mart seems appropriate at this location.

We were downtown for the 8th floor with the 2-year-old Sunday morning. We then did lunch in the basement. Not sure which space was in sadder condition: the abandoned upper floors or the basement itself. Sad!
The problem with being an introvert online is that no one knows you're just hanging out and listening.

I know, right? The basement food spots were great even 5ish years ago.

I revisited this picture I had in my files. George Dayton and Charles Sedgwick originally envisioned 11 separate entrances along the Goodfellow's Nicollet facade. That could be amazing. 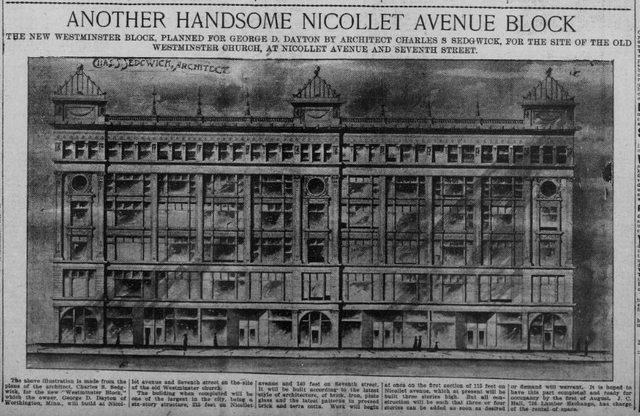 Send that over to Eric Dayton


Update: City Hall sources tell TCB that Macy's has told them it intends to announce the sale and closure of the Nicollet Mall store this afternoon (Jan. 4). Asbestos issues remained a sticking point with City Center Partners, so the buyer is believed to be 601W Companies of New York.

Adam Platt has updated the story to reflect this new info http://tcbmag.com/News/Recent-News/2017 ... l-Building

So here's a somewhat positive thought to contrast with the doom-and-gloom that some are probably feeling: what if a well-run, but lower-end department store such as Herbergers or JCP were to be brought into to the revamped building? That wouldn't be so bad, right? They might not carry the same higher-end brands as Macy's, but the lower and middle-end merchandise is basically identical (Dockers, Nike, Columbia, et al) and that stuff's gotta make up like 75% of the store. Macy's has been so poorly ran in recent years (dated finishes/fixtures, disheveled stores), you'd be hard-pressed to guess that it was even supposed to be a notch above the likes of Herbergers/JCP, if you weren't told.

Of course, not many dept stores like that are opening new locations (and most are closing locations), but it's not totally out of the realm of possibility that this developer could bring in a Herbergers or Von Maur or similar to fill a good chunk of the space.

P.S. 601W Companies has some substantial properties in their portfolio http://www.601wcompanies.com/portfolio Looks like they deal pretty exclusively with premier stuff. This would appear to be among their lower-end holdings (mostly based on that the building complex doesn't include a tower portion). It will be their first in Minnesota.

What's going to happen to the skyway connection when this closes? Will people have too

Von Maur would be awesome. I used to go there back when I lived in EP. Way more organized than Macy's, not as expensive as Nordstroms.
Post Reply
299 posts