Who was the previous Mayoral Rep? Was it Wagenius? My understanding of that spot, unlike the mayoral appointments, is that it's someone who works for the city and is there to represent the mayor's views. Not that the Henn Co or MPRB "reps" represent their appointing organization's view. Anyways, great to see elfangor on the CPC.

That's what I was wondering, since Lord Elfangor is on the city payroll.
Q. What, what? A. In da butt.

I'm serving as a private citizen. CPED and the City Attorney's Office checked it out and didn't find a conflict, as I don't do anything related to development or the planning process.


Huh, seems like he'll do OK, just wish he was a little taller. IMO

Have fun working with Meg Forney!

After quoting several of his statements relating to parking, they felt that they also had to outline his position on the Oxford Comma

My favorite is her call for some sort of required prerequisite for the position as if a degree in urban studies isn't the most perfect qualification.

"He studied cities and the city wants him to help guide city planning... I'm outraged!"

That's the kind of qualification that looks good on paper... But it pales in comparison to the real, practical qualifications of owning a single-family home and at least one car.
Joey Senkyr
joey.senkyr@outlook.com

That's the kind of qualification that looks good on paper... But it pales in comparison to the real, practical qualifications of owning a single-family home and at least one car.

Well, it certainly is the case that plenty of "experts" screwed things up for people on the ground. Rondo comes to mind.

Nick will do a great job. I'm just pointing out that there are in fact different kinds of valuable expertise. On-the-ground knowledge is super important.

Earlier this week, I was going to post "I sincerely hope MRRDC has something to say about this". All my dreams have come true

Congrats, Nick! Do us proud.
The problem with being an introvert online is that no one knows you're just hanging out and listening.


I thought y'all might find this interesting: 2012 Planning Commission Annual Report

Scan through those projects. Many of them are now complete or nearing completion. Several have still not begun construction (New Xcel HQ, 4250 Upton, Nicollet & 54th mixed use) or have been cancelled outright (3535 Grand)

There's some interesting stats in there with regard to the quantities and types of variances, conditional use permits, etc. Also the percentage of projects that get appealed and the percentage of those that are granted or denied.

Looking forward to the 2013 Annual Report!

Could be worth attending, especially for the latter project. The MRRDC Facebook page has been relatively quiet, and I haven't seen WedgeLive reporting much in the way of opposition. Theoretically it is possible that most rational neighbors appreciate the design changes (esp. the western wall height) and only the tiny group of actual crazy people (like the 3 ladies behind MRRDC) will show up to complain.

As for Rana Village, I'd expect to see some Whittier longtimers show up to specifically bash Sabri, based on past behavior, not necessarily this specific project.

Looks like Magrino is going to find his way into some mad cash.

Assuming that all of the items this coming week are approved (staff recommends approval), here are the numbers for the Mpls Planning Commission through ten of twenty-one scheduled meetings in 2019:

For comparison, through eleven meetings last year, by June 11th, the CPC had approved 2,928 units of housing.

@alexschief - the data nerd in me would love to see the rest of that spreadsheet. Care to share?


Assuming that all of the items this coming week are approved (staff recommends approval), here are the numbers for the Mpls Planning Commission through ten of twenty-one scheduled meetings in 2019:

For comparison, through eleven meetings last year, by June 11th, the CPC had approved 2,928 units of housing. 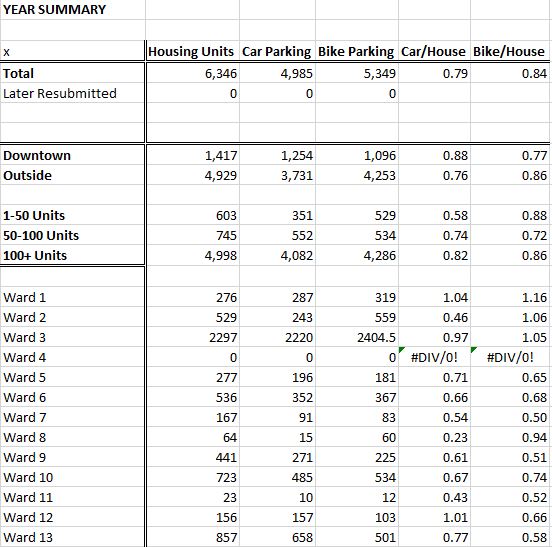 Takeaways:
- Another year without a single project proposed for Ward 4. For the time period that I have counts for (2015-present) there has yet to be a project proposed for this ward.
- 2019 saw a huge increase in the number of units proposed for 1-50 unit buildings, which is a great trend for affordability and multi-mobility. These units tend to cost less to rent or purchase, and have the lowest car parking ratio and the highest bike parking ratio.
- 2019 also saw a significant increase in the number of units proposed outside of downtown (bounded by the freeway loop and the river). This also tends to mean more affordable homes, lower car parking ratios, and high bike parking ratios.
- However, overall, 2019 fell short of 2018 in total units proposed, in large part because fewer big projects were proposed downtown. This is the case even though the Calhoun Towers project was resubmitted, and so moved from 2018 to 2019's count. Still overall, I suspect that this is a fairly meaningless distinction, since several large downtown projects (North Loop Green being the biggest) do seem to be real and in progress. I assume they will be officially submitted before the end of the year in order to avoid IZ requirements, but they'll be dealt with during the CPC's January meetings and so will count towards 2020. It would be surprising to me if next year doesn't get started with a bang.
Post Reply
104 posts