holy buckets those setbacks are small. Is it really proposing 0' setback for residential units on the upper floors? Also surprised they are trying to have the semi's use the alley for access, which sometimes is a big ask for blocks where there is residential uses on it. I wouldn't be surprised if this project elicits a fair amount of discussion at CoW given the large amount of variances for a project bordering as much smaller-scale residential as this.

If there's anywhere that very small or no setbacks and a bump in bulk would make sense by traditional goals of transitioning to lower density, wouldn't this be a great opportunity? Directly east of this building are 3.5 and 2.5 story apartments, and the big house to the south is a 4-plex (which has more apartments to its south). The southern setback is 5' only on the main level (admittedly, where a parking entrance is proposed, not a sightly wall) but the 2nd floor and up is 14' from the lot line, only a foot less than side yard requirements. To be sure, this thing is massive feeling owing to the four corners keeping their bulk, but I guess I wouldn't call its neighbors small-scale the way people refer to townhomes, single family homes, or duplexes.

I could see the city requiring smaller trucks if the delivery path stays as proposed. Honestly, I like utilizing the alley rather than something else. For a grocery store, this is way, way better than the Wedge's parking lot impact on the sidewalk and Lyndale traffic. Plus, semis would come maybe 3x a week (someone help me out here). Impact to alley traffic operations would be minimal.

There are about a dozen logistical red flags that come up with that site plan. It looks totally half-baked.

What can be done with that 4-plex in the future? We would need the "missing middle" zoning changes Peter has talked about, right?

I *almost* wish they would just take that property. But I'd rather see a different development there if possible as this thing is pretty bulky as-is.

A three or four story structure would fit better. No way the city allows deliveries through the alley. The only way in would be on 26th Street for 27th is too narrow even for small delivery trucks. 26th alley entry would be problematic as well with entry and exit. There will be long traffic stoppages for entry of vehicles needing to stop and back in and out. I have seen this on a regular basis with food and beverage deliveries to Bulldog and Nightingale on the other side of 26th.

I don't think it's the CoW's responsibility to fix a developer's broken site plan for them. They should be coming in with something that's at least workable.

A developer can pretty much go to CoW whenever it pleases, but CoW can ask that they come back before that project goes to the planning commission. The developer could just be testing the waters with CoW to see what the cities reaction to this will be. If I were Dan, I would be doing the same, especially since Lyn-Lake was such a big deal.

After reading some comments about moving a house, I don't think you guys understand the red tape or hoops the city has in place to make this difficult. I tried to move a very nice single family home onto the former empty lot at 22nd/Garfield and had support from the Whittier Alliance as it would contribute to increased home ownership instead of rentals but the city planning department squashed me like a bug and said they would never approve the set back variance I would need. The house unfortunately ended up getting leveled.

I REALLY dig this!

great design, I'm really enjoying the color schemes to it!

CPED is also seeking feedback on the following:
• Building height, scale, and massing: Overall, CPED has concerns about the building size, height, scale,
and massing being out of character with the surrounding area. Specifically the following: 1.)
maintaining six stories of height for nearly the entire building which does not step the building down
mid-block. 2.) The proposed first floor height is 23 feet, well above the height of the neighboring
building’s first floor. 3.) Having too much massing at the rear of the building, which could have an
adverse shadowing impact on the residential properties to the east and northeast.
• Articulation: Site plan review requires that in larger buildings, architectural elements, including
recesses or projections, windows and entries, shall be emphasized to divide the building into smaller
identifiable sections. CPED recognizes the numerous recesses and projections proposed and the
applicant’s efforts to make the southern third of the building somewhat subordinate to the northern
third of the building. However, CPED still has concerns that the applicant has not effectively broken
the building up into distinct modules to complement the smaller commercial building context. The
current proposal still reads as one large building. Vertical articulation could help break up the
building more than what is proposed (see attached for examples).
• Blank walls. Site plan review requires that blank, uninterrupted walls that do not include windows,
entries, recesses or projections, or other architectural elements, shall not exceed twenty-five (25)
feet in length. A portion of the first floor along Lyndale Avenue has a blank wall greater than 25 feet
as does nearly the entire 1st floor of the southern and eastern elevations will be blank walls. CPED
also has concerns about how the large open loading area will feel for users of the site and
neighboring properties.
• Number of exterior materials: Site plan review requires that buildings should not include more than
three exterior materials on each elevation (excluding glazing, accent, and foundation materials). The
eastern elevation is showing four exterior materials. In addition, given the placement of materials
and proposed changes in colors of the exterior materials, each elevation appears to have five
different materials. As previously mentioned, CPED is encouraging the applicant to create a cleaner
design and to explore breaking the building up vertically.
• Bike parking: No bike parking is shown on the plans. CPED is encouraging the applicant to meet or
exceed the bike parking standards for the residential and commercial uses given the bike ridership of
the area.

This is pretty unlikely to get approved in its current state. I like what they've done with the upper floor massing along Lyndale, but they are still proposing to build 5 stories straight up on the property line along the alley. That would be awful. Why even propose something so ridiculous? They really need to step back the upper floors along the alley.

The last bullet point is less of a concern at this time as it will almost certainly be addressed in future plan revisions.

Traffic/circulation: They are going to run into a lot of resistance by having the only vehicular entrance along Lyndale. Unless they somehow straight up prohibit left turns into the property (with a median), people are not going to like that. The congestion caused 4 blocks north of here at Wedge Co-op is pretty universally despised. At least cars won't be coming out onto Lyndale, but still...can you imagine cars on southbound Lyndale trying to turn left across 2 lanes of traffic to get in here? Especially with no stoplight at 27th to stop the flow of northbound traffic, northbound vehicles move pretty fast here and gaps are few and far between.

IF they can prohibit left turns into the project, then everything is fine. It's in the middle of the block, so I'm not sure how you would even do it with signage. I don't know how you actually accomplish that without installing a median. And if you DO somehow prohibit southbound cars from turning left, how do they get into the project? The fact that 26th and 28th are one-ways, and there's no stoplights at 25th and 27th make "around the block" movements really difficult.

The former is extremely problematic for so many reasons, to the point it can probably be thrown out.
The latter could be fixed with a signal at 27th & Lyndale, which arguably should happen anyways.

5 stories straight up, 0' setback from the property line along the alley is pretty unprecedented. I have no issue with the height itself, it's the massing.

Isn't it only straight up along the property line on either end (i.e., isn't the length of the building shaped like an I)?

It's a pretty fat I. 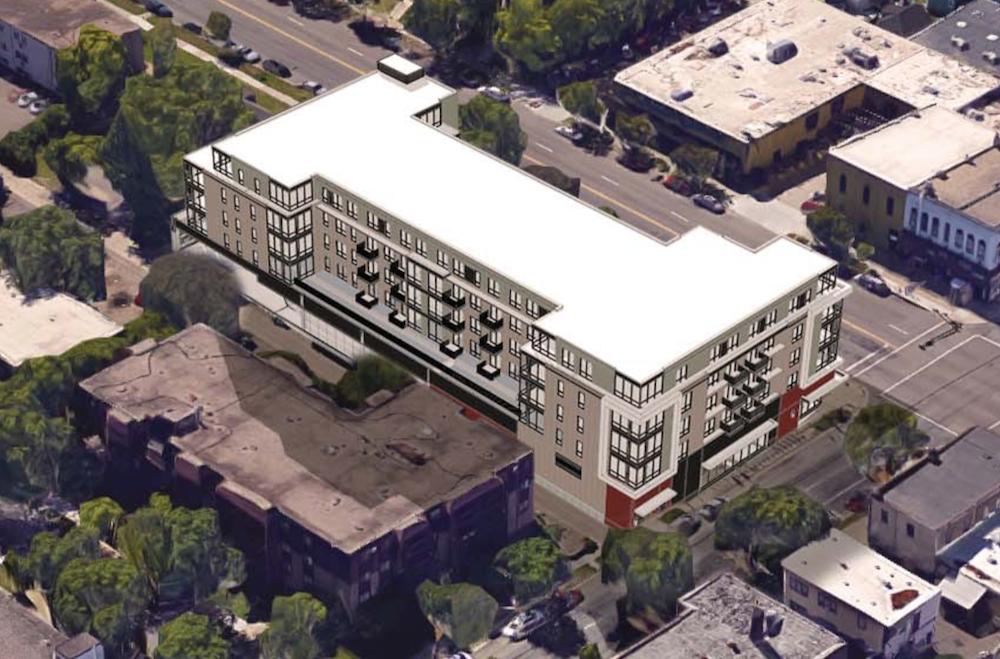 I agree that the circulation is the biggest concern here. I'm really skeptical that the semis are going to be able to maneuver through the narrow alley like they're suggesting, especially given that this narrow alley theoretically serves two-way traffic. And the vehicular access from Lyndale is problematic for all of the reasons that twincitizen lays out.

The decision to push the bulk of the north-south bar of the apartments towards the alley rather than towards Lyndale is curious, but wouldn't be a deal killer for me.

It's a pretty fat I.