The 400 Bar has been sold and will likely become a charter school for Somali children. The bar owners may open another location sometime soon. Looks like the last music act to play at the bar itself was Koerner & Glover on Nov. 26th, while the bar had also handled a Sufjan Stevens show at Mill City Nights on Dec. 12.

Was that NOT a Somali bar (is there such a thing, since most Somali's are Muslim, and Muslims don't usually drink)? I am envisioning a place where Somalis go to socialize and can maybe eat Khat that isn't wide open to the public, and if it's not there, I wonder where that is....

min-chi-cbus I think you may be thinking about the Red Sea down the block... seriously.

I appreciate that (seriously), but it's very unlikely I'll ever stroll into there.....but that's good to know!

If by this, you mean it was an overpriced concert venue with poor service and unnecessary attitude, then you're spot on.

It was very much a bar. You could probably rent a one-bedroom in Nic on Fifth that's bigger. But the 400 Bar served its purpose as a legit venue for a lot of smaller and obscure bands.

It's kind of disappointing to see an entertainment venue leaving the Seven Corners area, but I guess you can't really argue with a center for Somali children. I wonder where they would possibly relocate 400 Bar?

Also, this isn't really "University of Minnesota," is it? I'd consider Cedar-Riverside to be "Minneapolis-General."

I wonder where they would possibly relocate 400 Bar?

The long-vacant Viking Bar down the street would be perfect. That space needs to reopen as something!

If by this, you mean it was an overpriced concert venue with poor service and unnecessary attitude, then you're spot on.

....me, I did my drinking on the weeknights, thankyouverymuch.

And I never really got any attitude at 400 Bar.

....me, I did my drinking on the weeknights, thankyouverymuch.

If that's all you're looking for, then Palmer's should do just fine.

Here's a recent article about the much-missed Viking Bar.

Don't worry about me; I'm not even in the neighborhood anymore. And, as you're alluding to, there are about six bars down there that are approximately the same scene as 400...

This is the ImPark lot behind the Red Sea Bar. Speaking only from my own perspective, I have used this lot many, many times, and hope that any development would include some kind of parking. That being said, I've been waiting to see this thing go for a long time now!
Last edited by lordmoke on March 28th, 2013, 10:20 am, edited 2 times in total.

Now is the time to bridge over the trench and get some development to use air rights!

The way that the Cedar off ramp and the LRT criss-cross right here, I'd think that air rights would be an extra-complicated mess.

"the sky's the limit" for Lot A, so says the article!

Hennepin County and Fine Associates (nearby Five15 on the Park developer) own two smaller triangular parcels just north of the Red Sea building. Hopefully this means that the Lot A development will include something fronting Cedar right up to the corner. While air rights are probably impossible here, we can still hope for strong corner buildings that shrink the perceived length of the bridge.

This makes me think that the existing 16th Av cul-de-sac there could be downsized to parking access only, rather than a full space-wasting turnaround.

I don't think we ever started a topic on 510 Cedar, the building two doors down from Palmer's Bar which suffered a natural gas explosion and fire on January 1st. One person was killed and 14 injured. Reports at the time also said a couple more were missing, but I imagine they must have been elsewhere (I can't find any further information on that). They started knocking down the building right away on January 2nd. It looks like most of the debris has been removed at this point: 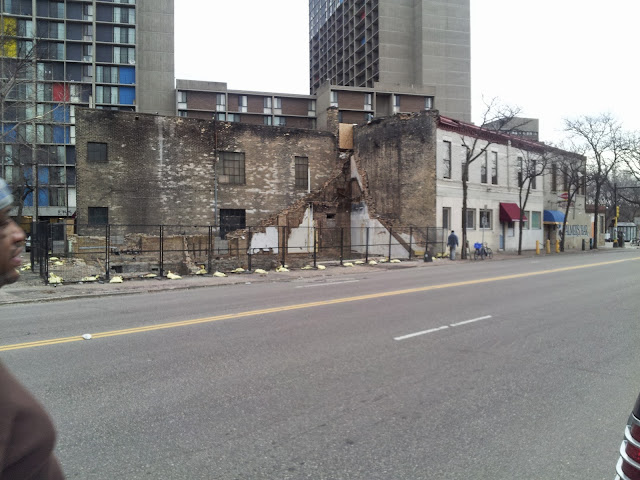 The building that wraps around in a roughly "L" shape is 504 Cedar, a mosque/cultural center which had to close because of water damage related to the fire. I'm not sure if they've managed to get it repaired/reopened yet or not.
Mike Hicks
https://hizeph400.blogspot.com/

Not sure how this was overlooked- saw the notices walking through the area on Friday. Nice new 3 story building on the site of the old Electric Fetus location that burned down in a New Year's fire a couple years ago. Nothing architecturally spectacular, but great urban infill. No parking.

I'm glad this is finally being rebuilt
Post Reply
28 posts