"Following the community protest, the developer applied for a city variance to approve its design for surface parking."

It will be an enjoyable process to watch that the developer needs a variance from zoning code to build parking (per staff interpretation of site plan with parking) but can build without parking as-of-right.

The sooner the city council (and some developers too I guess) realize there are some people that are literally opposed to every change no matter what, and stop trying to mitigate these people's concerns, the better.
Peter Bajurny
peter@bajurny.us
@FISHMANPET

Because they know that providing off-street parking is a desirable amenity for potential tenants?

The developer opinion is that the variance shouldn't even be needed, since this is an interpretation of the minutiae of parking site plan requirements. Yet the developer first pitched this project without parking. So it's clear they were first willing to not provide off-street parking for their tenants, and this revision and variance request is to appease neighbors.

What is surprising to me is that they would propose a variance AFTER they have been approved. They must be worried that the political pressure exerted by this lawyer with his 90 signatures will have an effect - THAT is the part that surprises me, that they wouldn't just give these people the middle finger and build what is approved.

Because they know that providing off-street parking is a desirable amenity for potential tenants?

Right, I get that but if they really felt that it was worth it for their pro forma, they would have done it before submitting their proposal instead of getting approved and then going in for a variance (for something that they felt they didn't need in the first place). I think FISHMANPET is on to something. If they are approved and don't feel they need the parking for an amenity/pro forma purpose, then they should just steamroll through.

My theory is that the developer originally went to a city review with plans showing the parking that they wanted to provide, and the planner told them that, based on their interpretation, their parking layout was non-compliant. So the developer said, "Fine, then we won't provide the parking." And then, you know, blue tarps and shit. So now they've got neighbors screaming for parking, and they can go back to plan review and have them approve the parking that they always wanted in the first place.

What is surprising to me is that they would propose a variance AFTER they have been approved. They must be worried that the political pressure exerted by this lawyer with his 90 signatures will have an effect - THAT is the part that surprises me, that they wouldn't just give these people the middle finger and build what is approved.

Going to put on my MNdible hat and say the reason they'd do this playing the longer game in the Minneapolis development market. Being able to say "we actually worked with neighbors to meet their concerns" is a good card to have in your hand in the future, and it's a pretty low hurdle to get this variance, at least from the city (not taking into consideration whether the likely decision to approve will be appealed by neighbors). I say this without having seen the site plan, of course.

MNdible has a compelling theory of what happened, but I think it's just as likely they had no parking to begin with. The architect involved has been a huge supporter of removing the parking minimums (he was at the public meeting for it held by CPED, testified in support at City Council, etc) and I think wants to showcase a few small projects without it. Just my take.

But, to FMP's point. This project will be just like the 2008 Bryant of 36XX Bryant projects where very minor things were appealed (site plan review citing garbage and snow storage for the former, a 1' setback for the latter). Here, neighbors complain about lack of parking. Parking added and needs a variance? That'll definitely be the variance neighbors will appeal. If you watched the Z&P meeting with the 36XX Bryant appeal, CM Bender made some remarks about how it's hard to listen and take these things seriously when it's pretty clear residents aren't arguing in good faith. Of course, what she (and I assume many on this board) might assume are actual arguments in good faith (ex. opposing a 6-story building next to a single family home, etc) I usually find to be bad faith. That's my personal opinion. In either case, we've heard time and again that single-lot infill at least in the realm of scale to its neighbors (ex. 2 stories or 1.5x higher than adjacent properties) will go over just fine. It's simply not true.

If you guys really believe that then you have a very high opinion of developers and architects. I'm not saying you are wrong, I'm just trying to understand your thinking.

Just so I'm hearing this right: The development team had the architects draw something that they KNEW did not comply, with the hope that it would get approved but if it didn't, they would remove parking entirely (by right) with the hope that a petition/lobbying effort would be triggered that would exert pressure to provide parking which would then force the city to allow a non-compliant parking design.

I guess we will never know but I'd have to say that this would be the most devious navigation of the entitlement system that I have ever seen and I've been in many rooms working on big projects in this town. If what you say is true, then respect to the development team for taking the risk and having the foresight that a petition/lobbying effort could allow them to build a non-compliant design that they wanted to build in the first place.

I spoke to someone who is involved with the project to find that out.

I wasn't suggesting that they had the whole thing mapped out in advance in some sort of machiavellian master plan. Also, if we take the architect/developer at face value, they believed that their original plan was compliant.

@mattaudio: So, the "scheme" isn't conjecture, it is corroborated - got it.

@MNdible: Setbacks are rather straightforward so I'm dubious about the developer's/architect's compliance claim but that is what is fascinating to me. Perhaps the development team didn't plan for the petition/political pressure but that they are taking advantage of it apparently. Respect to them. It will be VERY interesting to see if their non-compliant parking gets denied. Does the blue tarp crowd grab the pitchforks and torches and elevate their game?

Does the blue tarp crowd grab the pitchforks and torches and elevate their game?

Yes. See my comments above regarding appeals over very minor variances and site plan review issues.

Does the blue tarp crowd grab the pitchforks and torches and elevate their game?

Yes. See my comments above regarding appeals over very minor variances and site plan review issues.

Oh, of course they will. There is no doubt because if there are two things that people hate under any circumstances it is change and reduction of parking.

What I'm saying is that it will be very interesting to see how this plays out in terms of finger-pointing and what the neighbors will accept.

Concerned Resident: "Why aren't you doing parking behind your building!"
Dev: "We tried for parking in the back but the city denied it!"
CR: "You should'n't build a project at all then if you can't have parking."
Dev: "..."
CR:<begins tarping car for ensuing protest>

I made a quick stop after leaving the car wash. 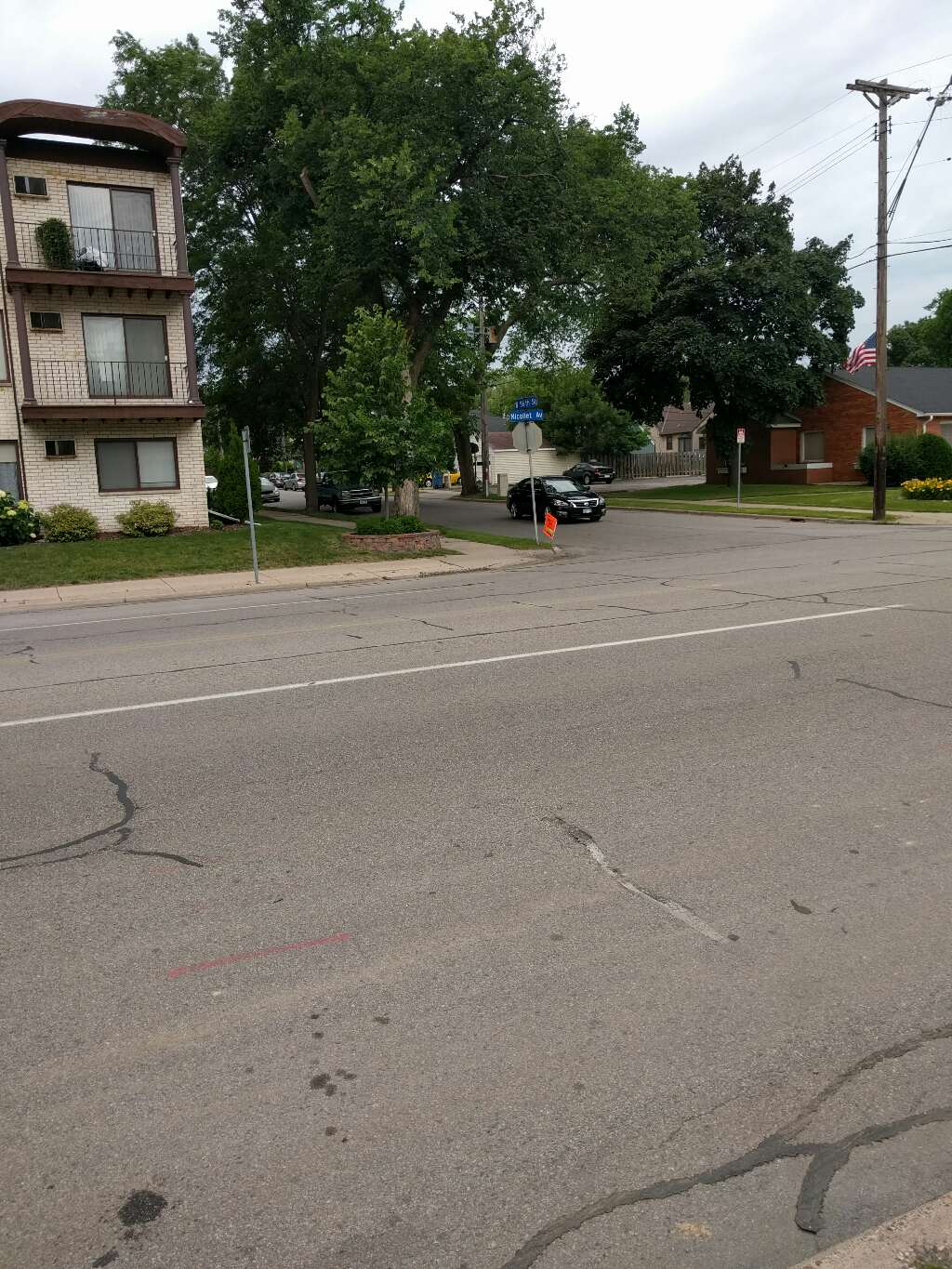 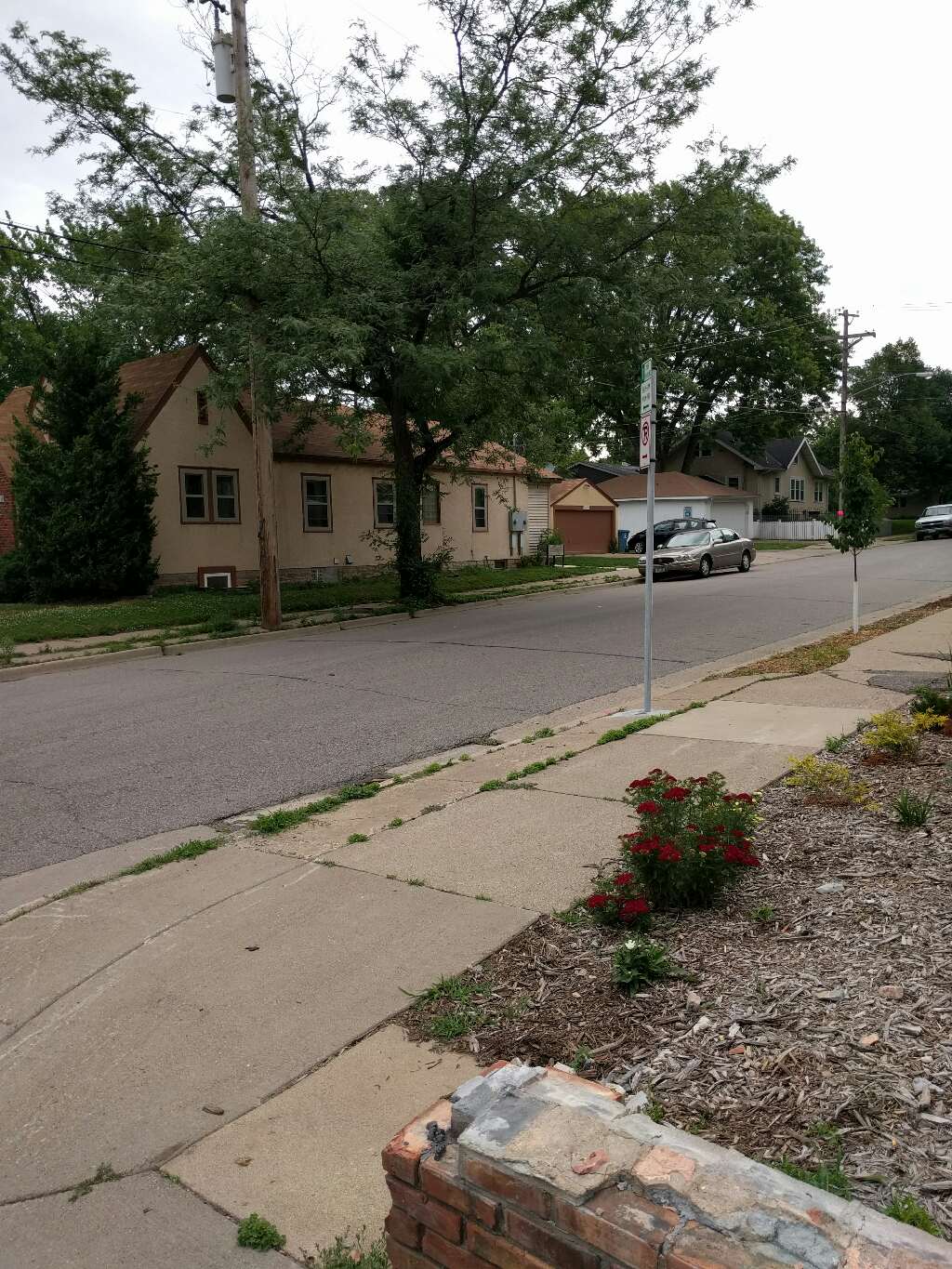 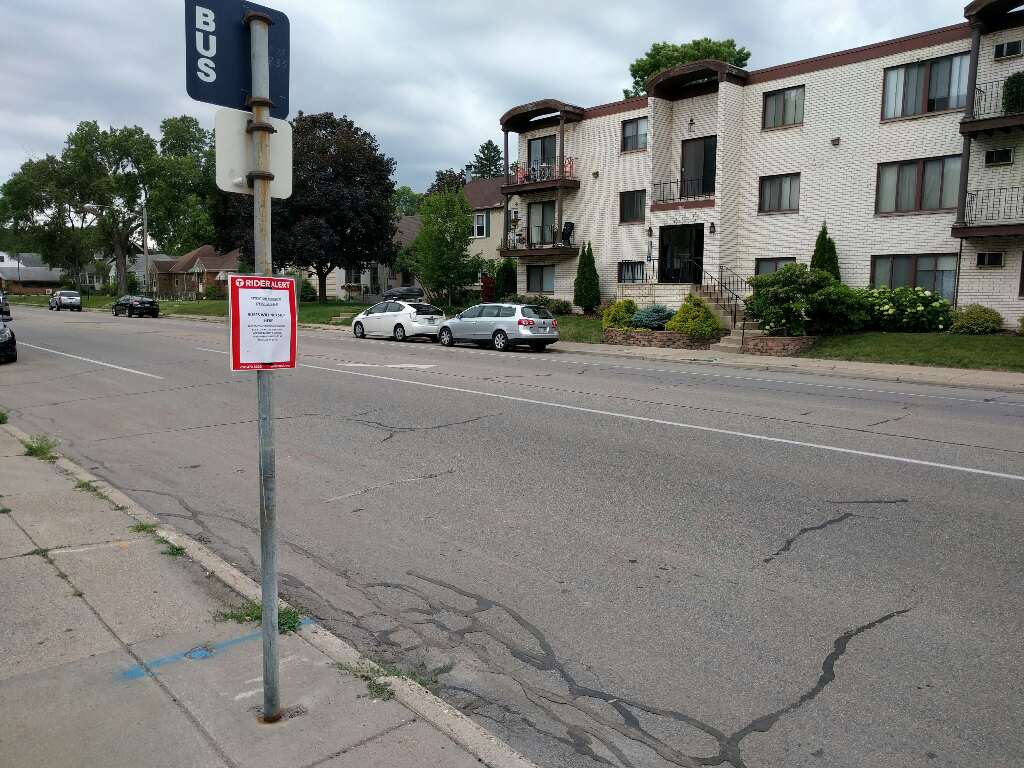 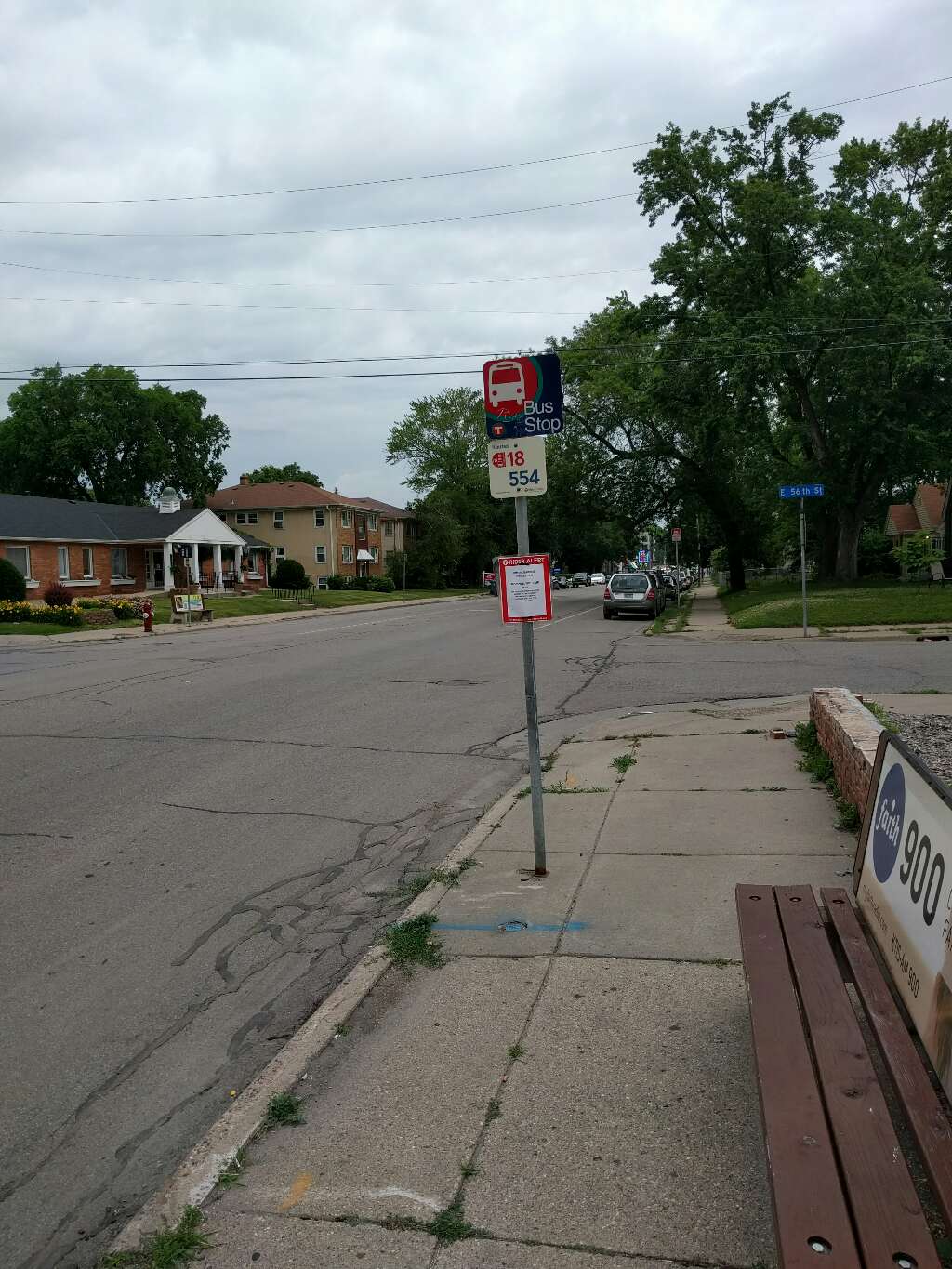 Lookit all the cars!

Did you also snag a pic of the hole that's already being dug in the ground on the site of the new development? I was surprised to see an excavator on site and having done significant work already Thurs afternoon.
The problem with being an introvert online is that no one knows you're just hanging out and listening.

I didn't get a shot of the hole (heh). It looked like excavation is done and concrete forms in place.

I didn't get a shot of the hole (heh). It looked like excavation is done and concrete forms in place.

Yeah, but after these 6 units are in, there will obviously be twelve cars because there will DEFINITELY be at least two cars per unit.

Imagine these photos with 12 MOAR cars parked on the streets! How will a bustling commercial enterprise like a law office be able to function if clients will have to trek several blocks, uphill in both directions, in a driving hailstorm to get their very important work done?!

Such a trek would obviously be necessary after the parking lot behind the building filled up because of the bustling and all.

Judging by the gorgeous retaining wall restoration and adjacent landscaping, it is clear that we are dealing with someone that cares deeply about the city and not a person whose interests are wholly self-serving. CM Quincy should be ashamed.

Thanks to all for the photos and the discussion, which have rendered completely obvious the silliness of these "parking" concerns. Personally, I suspect parking panic is just the socially-acceptable cover story for what's really on some of these people's minds: concern about who might move in. This is all speculative, of course... so it's hard to know whether the underlying mindset is a toxic one (OMG, they might be black, or my kids might see two women holding hands), vs. just unreasonably sensitive for an urban environment (they might work late shifts, so we might hear their car door shut when they get home at 2 AM), or even just insular-Midwestern (exposure to any People We Don't Know).
Post Reply
191 posts