Agreed, although I think this was also an issue before the redesign. It seems like it happens every time that I stumble upon a day old hard copy of the Strib, and find articles that I never saw online, even though I'm a frequent and regular visitor.

Walking by this afternoon, it looks like they will be pouring the ground floor sometime this week. All of the structures are in place. Just a bit more rebar work and they should be ready to pour the floor and possibly a few support columns before the weekend. 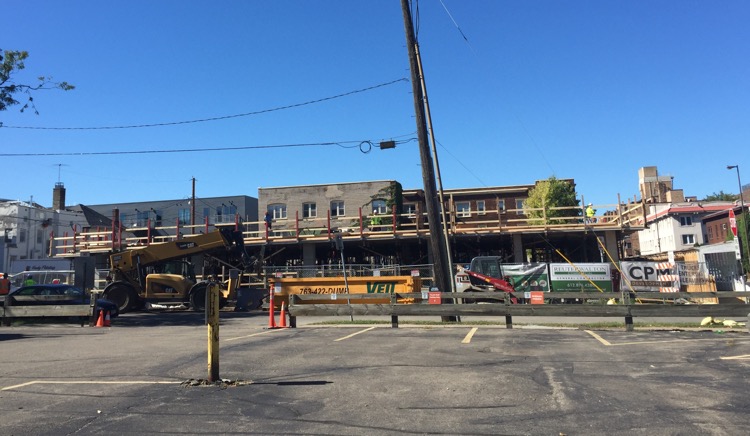 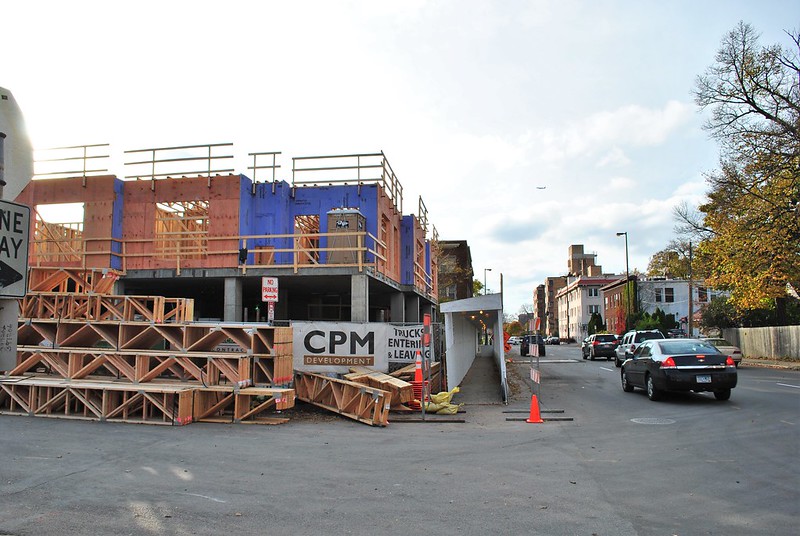 The 3rd floor is now framed up and work on the 4th floor has begun. It is now approximately the same height as the adjacent building on Lagoon. 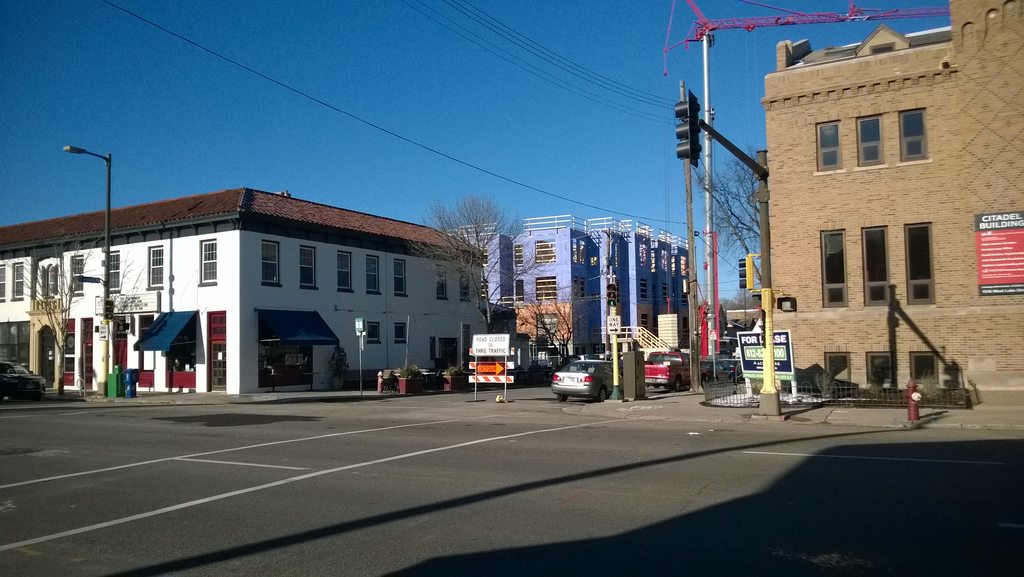 I like the idea of redeveloping some parts of the city and restoring some of the walkable big city charm by the lakes that Uptown had back in the streetcar era, but imagine this for a second.. when you get up at 6:30 in the morning and get ready to work with let's say half of the of the people in your building, all 25 or more of you get down to your car and line up to go out of the parking entrance in to an alley only big enough for a garbage truck to get through. Once you slide through the alley only one of your four options has a controlled intersection with street lights at it, the rest are filled with the infamous Uptown rush hour traffic and stop signs. People are already jogging the lake and walking around, it's the city after all. Now after work try to decide which one way street to come off of and hope that one of the other half of the building someone didn't decide to leave at that same time and come out the same way that you are driving in. Don't forget that there is another building's parking entrance in the alley also. That's it. Just a thought I had.
I really liked the idea of the Portico building, and I'm also interested in this one. I would personally like to see another coffee shop at this corner now that Dunn Bros has moved and JJ's closed. Some times the line at Caribou in Lunds is just too long, and Dogwood takes some time as well. It will be neat to see all of the new people walking their dogs around everyday and also to to resturants and bars on the weekend. I also liked the idea of the new Walkway building by Stellas. I think they got the idea right by marketing a lifestyle where you can walk to what ever you need. Maybe my point is that it seems like most of the Uptown infrastructure is not exactly automobile friendly. New medium density buildings around here really have an oputunity to fine tune and perfect that idea. Maybe not capitalizing on that means that they might expect slightly higher turn over rates from some of their commuters or residents with a lot of out of town visitors.

Looks like they have 1 1/2 stories yet to complete. This has been a good winter construction year so far for the contractors. Not sure if they have start putting up the exterior yet as I've not walked that far down. Only what I can see from a far on Lagoon. 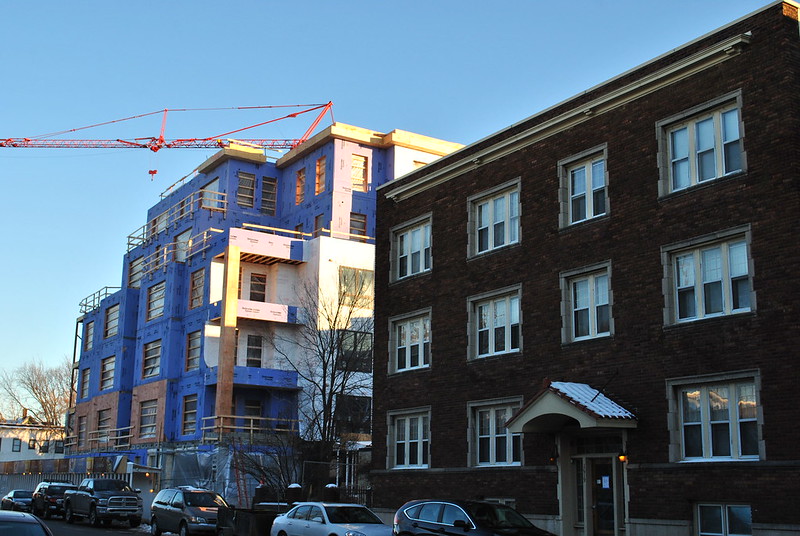 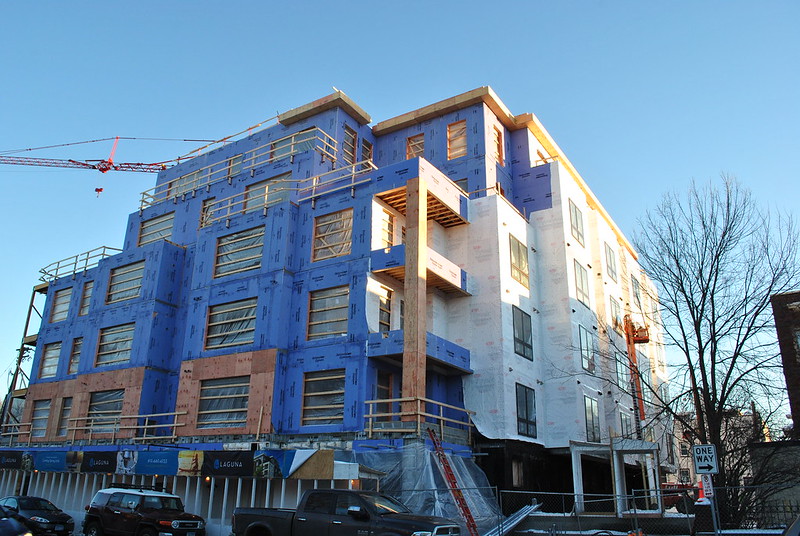 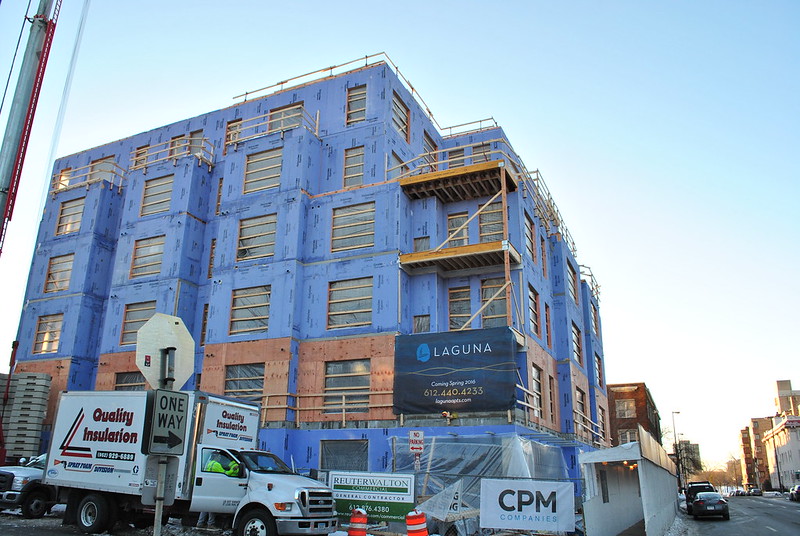 Looks like this baby is topped off and now ready for cladding. 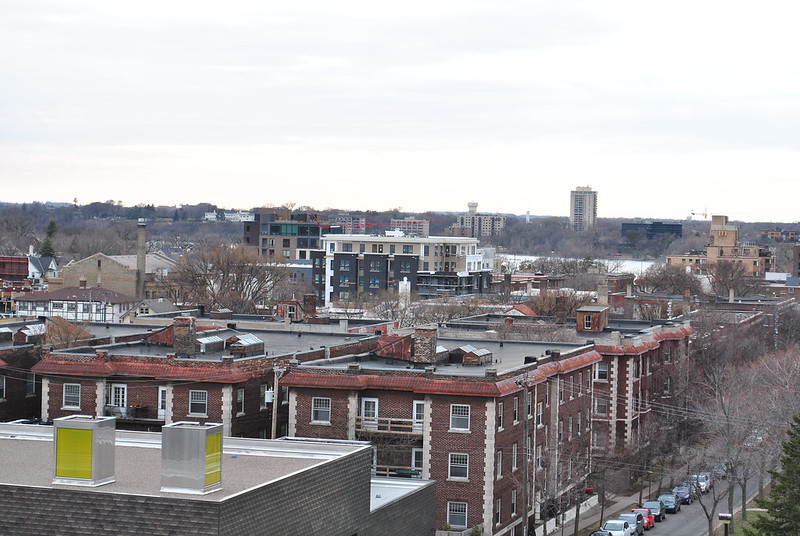 So about the quality of materials... They probably should've just stuck to brick. 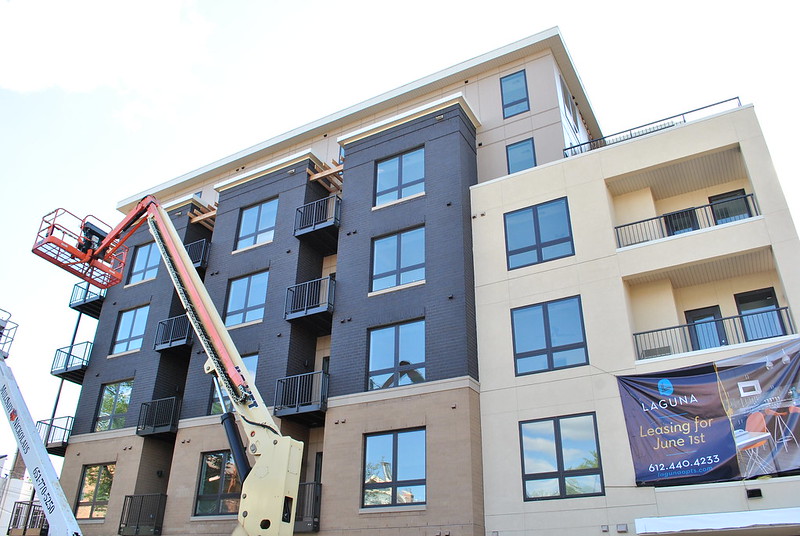 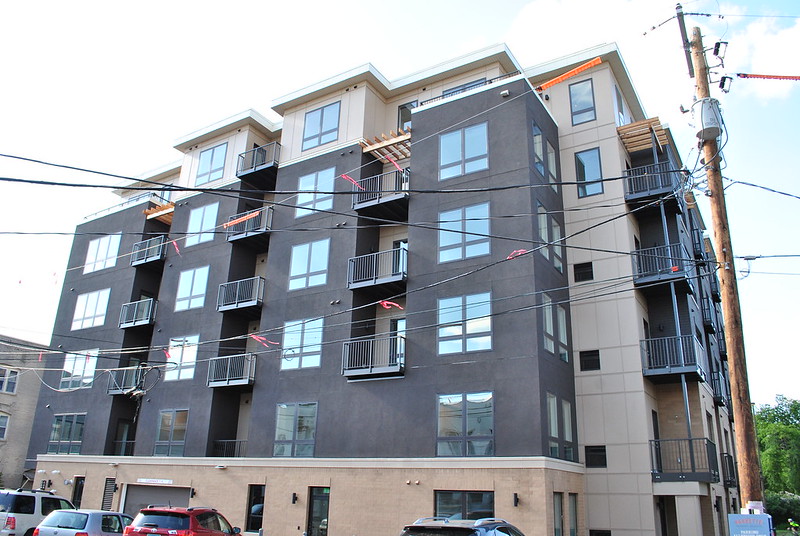 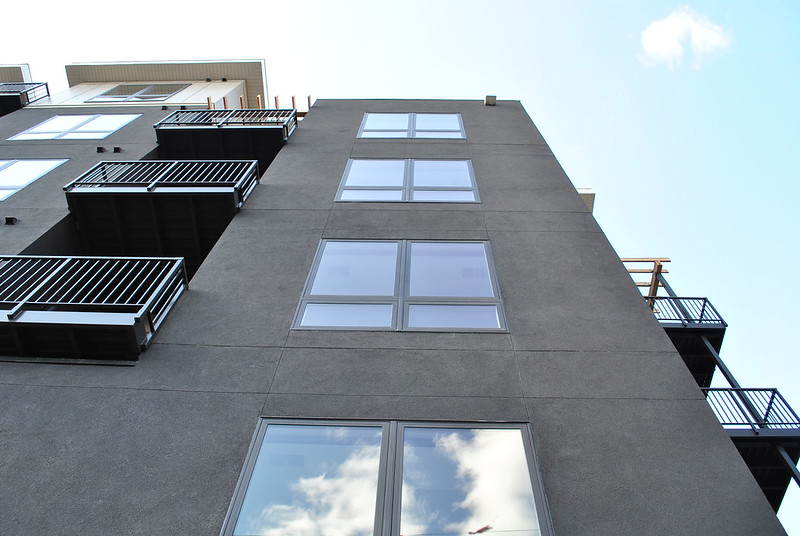 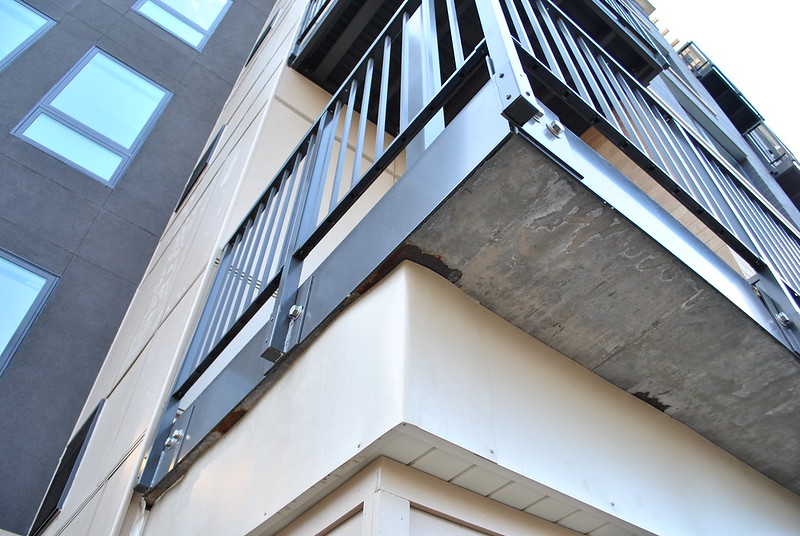 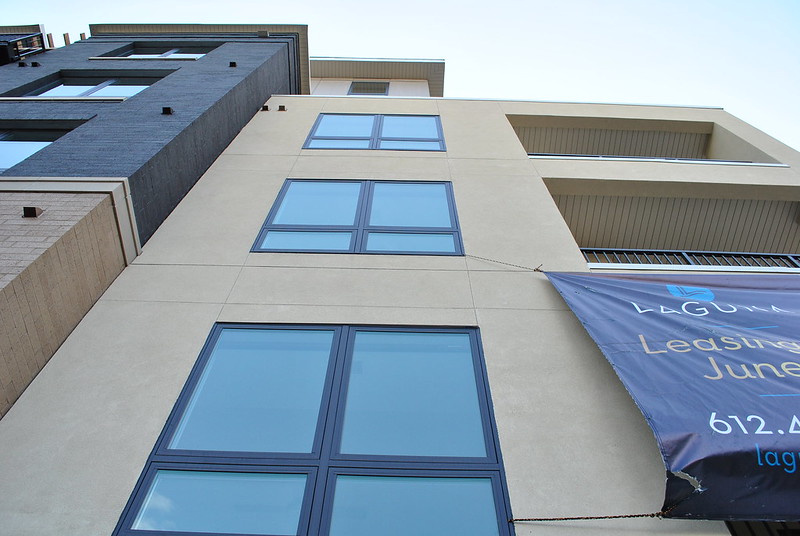 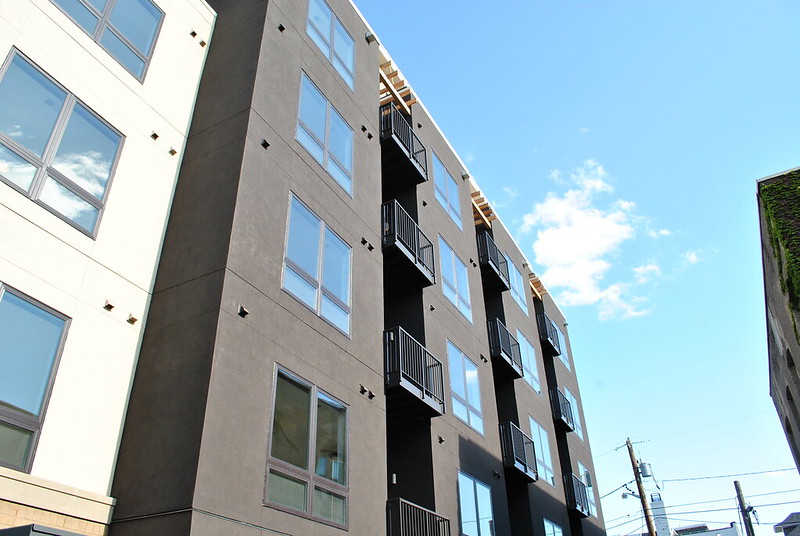 Yeah, that's some really bizarre detailing in the close-up shot of the balcony.

Anyway, thanks for the photo tour, Grant!

Can we all chip in to deliver a pallet of 1x6 Miratec and a box of construction adhesive? Would they get the hint?

The street-facing sides all look pretty nice to me-- even with the cement board. The cement board is mostly on the ally side, no? Overall, I think this is a great looking building for the area; its height/footprint proportion is spot-on.