Honestly, a washer/dryer is one of my top "wants" in a future apartment. I won't be able to afford it, but as someone who doesn't carry cash pretty much ever, I hate that I have to make a trip to the bank just to get quarters to keep my clothes clean. A #firstworldproblem to be sure.

Honestly, it looks like a combo unit costs about $1000 at Sears (and I assume developers get them cheaper by purchasing en masse) and it's a nice perk that spread out over 5-7 years is really a marginal increase on rent, if any (no doubt anyone with laundry in building in paying both for the machines to exist there AND the price per load).

I'd love to see a place that is nice (washer/dryer, nice kitchen with cheaper stainless appliances) that eschews some community features and maybe has smaller units in order to control prices to the roughly $1000/month that Tommy mentioned above. I'm probably never going to use a pool and unless the fitness center is actually decent, I've got to keep my gym membership anyway.

Most of the price is the fact that these places are usually built on expensive land though, isn't it? And the fact that the units are new. I thought somewhere on here it was mentioned that the 2320 Colfax project was going to have rents that were much more reasonable than, say, what's at Lime or Flux.

As someone planning potential laundry hookups on my second floor expansion, the cost of providing in-unit laundry isn't really the units, it's the hookups. You'd need water supply (probably easiest to run), standpipe/trap/wasteline, dryer vent to the outside, and gas and/or 220v electric to each washer/dryer setup.

There's this common meme (not specifically in this thread or on these forums, but just in general) that developers are all uber wealthy making ludicrous windfall profits from new developments, when that's just not the case. The biggest cost in new development is the cost of construction, everything else is just painted on top to make the apartments "luxury" enough to demand the rents necessary to pay off the construction.

New units are probably never going to be affordable in a market like ours, but new buildings can reduce demand on older buildings that are old enough to have paid off the initial construction, allowing them to lower rents and still be profitable.

Also speaking to shared laundry, pretty much the only reason I'd ever go to the bank is to get quarters, so I'd get $100 at a time. The teller asked what all the quarters were for, and I said laundry. She said I must really like laundry and I responded "No, I just really hate getting quarters." (As an aside, I just moved into a house with its own laundry, a blessing).
Peter Bajurny
peter@bajurny.us
@FISHMANPET

The point I guess I'm trying to make, is there must be SOME amenities (pools, fitness centers, concierge, etc etc etc) that can be taken away to give the "normal people" the opportunity to enjoy something that isn't 1000+ a month for a studio or 100 years old.

You're falling for supply-side economics. It's not the amenities driving up costs. It's the fact that people will pay ridiculous rents, whether or not amenities are there. Location only affects the degree of insanity. You could take out the fitness centers, concierges, etc. in Uptown and people would still pay a ton of money to live there. Demand is driving cost.

Price isn't primarily set by the cost of goods. It's set by what people will pay. If people won't pay enough, the amenities won't be there.

got some numbers from IRL developers in here:

Certainly. Maybe my use of "supply side" wasn't quite right. The point is that people think prices are set by the cost of goods but often that's not true at all. Electronics is a perfect example.

It sounds like these newer projects are indeed cost-driven in a big way, according to Nick's article. Stll, even after those costs are paid off, if the area is still hot, prices won't go down much.

I have been walking and riding the train post all these grain elevators quite frequently and I keep hoping that they will be preserved in a creative way. I ran across a few examples that I found to be quite exciting. The first is a really great mural on a grain elevator in Western Australia. Imagine the Walker commissioning an amazing artist to paint some of the silos along Highway 55. The second is from a proposed project in Buffalo, that would set climbing routes up the interior and exterior of the silos. Vertical endeavors could be tapped for a project like this, and it would be a great fit with the outdoor culture in the Twin Cities.

Or we could make productive use of the land they occupy.

That's a lot of concrete.

There are condos west of Lake Calhoun/Isles that used to be concrete silos. Not sure how the size compares to these, but makes for some uniquely shaped units. http://www.calhoun-isles-condos.com/

A few other examples of grain elevator conversions into housing...

In addition, MVRDV did The Frøsilo, a conversion of silos located in the old harbour area of Copenhagen

In addition, found one other example of a conversion into a rock climbing gym called the Rocktown Climbing Gym in Oklahoma City. They even used it for ice climbing... 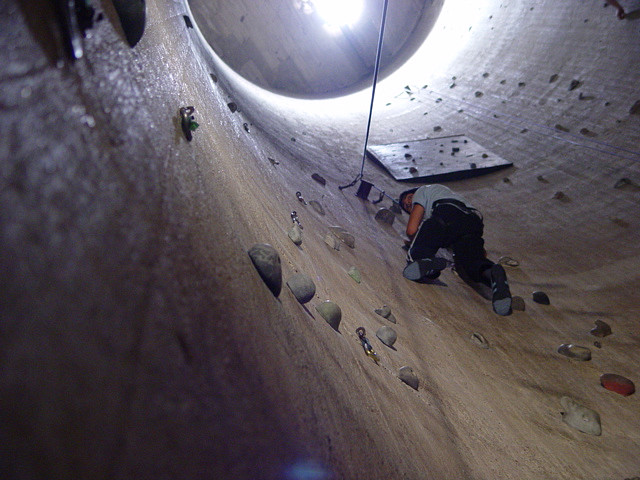 +5 for conversion to housing; Love the idea.

Seems like a fine idea, but why rezone now if now simultaneous application for site plan review of the storage facility? There doesn't seem to be any reason to change the zoning of a property if nothing is imminent. Honestly, I'm fine with it being a storage unit facility forever (not holding out for future super expensive, super challenging conversion to residential). I just don't see the point in rezoning now without other simultaneous applications. Speculative rezoning is dumb and a waste of everyone's time.

Unless it's widespread massive upzoning.

Explain more why speculative zoning is dumb? Sounds like a good idea to me.

It's already been spectuively zoned to R5 based on the small area plan, and now the applicant wants to rezone it back to Industrial (with an Industrial Living Overlay) in case they do something in the near term. It seems silly to do it now when it could just be done as a matter of fact when they apply to turn it into storage or whatever.

Also gotta get in a dig against zoning here, it's clearly already failed when you've got a towering industrial use next to a single family home, trying to bandaid it by swapping between Residential and Industrial whenever we feel like it just weakens the whole supposed benefit of zoning. I think it's clear that "we" (this forum, the government, most people, etc etc) would prefer this building be reused in some fashion rather than torn down and redeveloped, but zoning isn't helping with that, and is in fact making it more difficult (if only slightly) to change the use of the structure without drastically changing the form.
Peter Bajurny
peter@bajurny.us
@FISHMANPET
Post Reply
218 posts