Good move by Supervalu to box out Hyvee from the area. If you're the owner of Oxendales, what do you do with this information? Hold course until you inevitably start losing money? Do another remodel/refresh to go even further upmarket towards Lunds/Kowalskis and increase your margins?

This statement from Supervalu is pretty encouraging for the eventual redevelopment of the Uptown location:

"We're going to do things differently than we’ve done before at Cub," Dament said. "We’ll have things like multiple entrances, because there’s so many people walking by [that area], and we’re going to have a really beautiful outdoor area so you can sit outside. There will also be a window where you can order things outside."

The Cub store will have communal-seating areas inside with plug-ins, so customers can work on their computers or charge their phones. The store will feature a new coffee concept called Refresh! serving Caribou Coffee, ice cream and cookies. The store will feature some elements that Supervalu has mixed into its recently remodeled Cub stores: Grab-and-go meals under Supervalu's “Quick and Easy” brand, a juicery, an expanded deli with build-your-own food selections and a popcorn counter.

I'll definitely not be going back to Hi-Lake Cub once this opens...but this is sounding so good I might never go back to Oxendales either...

I’ll probably shop there. I still think 38th and Hiawatha would be a better location as far as grocery store spacing is concerned.

I'll have to see the new concept. As it's a Cub, I don't expect it will have much to offer that I can't get at Oxendale's (or SuperValu), and those are closer, so why travel past those to get to it? But it's a new concept, so maybe it will be better than I expect and substitute for some trips over the river to L&B in Highland Park. I would be happy if it could, because I could bike more often (the hill and lack of bike facility on Ford Parkway means I mostly drive there).

I like how this sounds. I agree that this concept would be cool at the Uptown location too, with connection to the Greenway. This statement though stood out for me, "We’re going to test it and see how it goes." I think it will go well, but what would they do if it didn't go well? Of course the next statement is about their 50 year heritage in the area, but this being a test doesn't rub me the right way.

But again, I haven't seen what you're referencing.

This is a very unique style of building, that's for sure. When they had the single precast wall section standing alone it just seemed really strange. Now that they have more, above the dug hole for underground parking, it's even more strange. I wish we knew more!

Here are some pictures I took today. Doesn't look like it's temporary.

It looks like tilt up construction and it is anchored to foundations so its definitely permanent. If it is tilt up, I haven't seen that used on a building like this, honestly.

Phase 2 of the oppidan/cub foods project. With all the development in this area, the city really should make sure the public space is well coordinated. 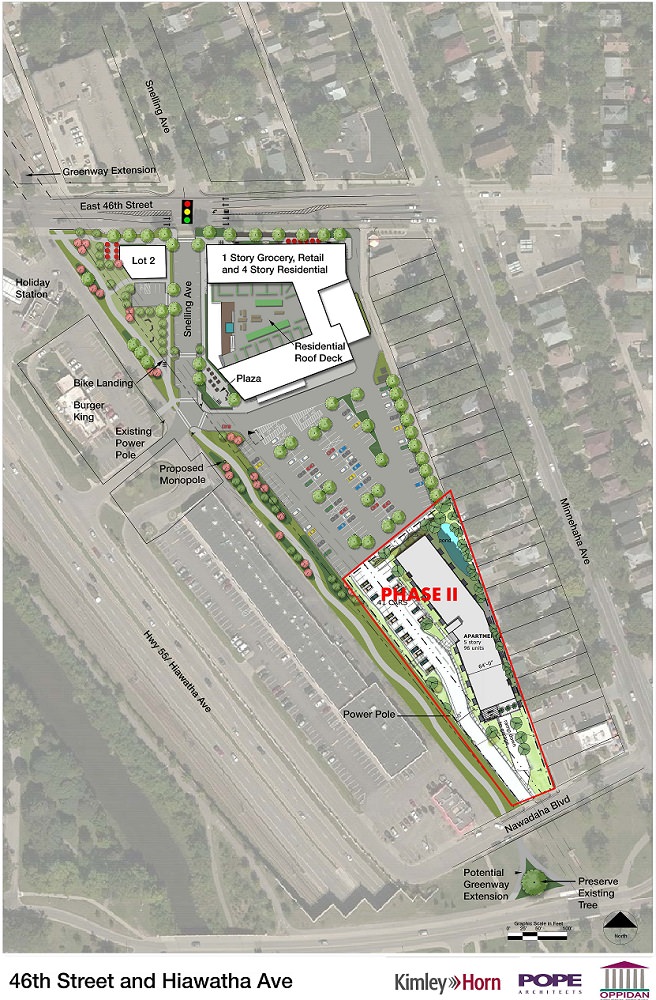 Please no curb cut onto Nawadaha. And why all the pavement next to what could be a beautiful trail?

Wow, that looks like as good a use of the triangular sliver as one could expect. The public space coordination (MinHi Line trail) looks fine, as presumably Oppidan is building the whole thing (in lieu of paying park dedication fees?) between 46th and Nawahada.

My biggest concern is also the number of curb cuts on Nawahada. From east to west, there will be DQ, the public alley, access to Phase II parking lot, the MinHi trail, and private "alley" running behind the strip mall. The Reuter Walton project (Bridgemans/Somtaste site) is the only one that won't have a cut onto Nawahada. It's probably fine, as it isn't a busy street, but that puts a lot of turning/entering/exiting vehicles around the new trail crossing showing here. At a minimum, I'd want the trail crossing to be raised crossing Nawahada. Turning this one block of Nawahada into a woonerf wouldn't be a bad idea. Use pavers for the roadway and bituminous for the raised trail crossing.

Minor quibble: Their site plan of phase II isn't correctly scaled right, as the image covers up the adjacent alley serving the remaining homes along M'haha Ave. Unfortunate mistake, as the building is proposed quite close to that east lot line along the alley - this scaling error covering the alley makes it look like the apt building directly abuts backyards, when there's an alley between them.

EDIT: Fehler, that private road (serving as direct access to Phase II, as well as connecting to Phase I) is actually a component of the 46th St Station small area plan years ago. If it helps, think of it as a private extension of the new stub of Snelling Ave. It does seem to have utility as circulation and secondary access to the apartments and Cub. I do think a project of this scale with a full grocery store needs a secondary/emergency valve in addition to the main entry off Snelling Ave Ext. Would it be better if the private road emulated a city street, with parallel parking on both sides (or at least the west side) instead of the 90-degree parking stalls? Perhaps!

Just looking at the geography, it seems like it would make more sense to access the parking from the alley and put the parking on the alley side to put some space between the building and the houses across the alley. But maybe that doesn't work with the utility line that runs over the property.

Looking at the "proposed monopole" on the plans, I think they're planning on replacing a pole near that location (see dashed box slightly east of new monopole), with the effect being that the overhead lines will be tugged to the west a bit, just to make the Phase II building fit. It does not appear that anything could be built where the proposed surface parking area is shown.

That said, yeah the underground parking access drive does seem like it could connect to the alley, if there was support for getting rid of the "private drive" connecting to Nawahada and instead dead-ending the surface parking lot. While that would go a long way toward reducing paved/impervious area and improving the trail frontage on the south end of the site, it would create a literal dead-end parking lot and non-ideal fire/emergency access to the apartment building (the only way in/out then being through the Cub parking lot). I don't think Fire/EMS is gonna sign off on that idea. I think the private drive / parking lot access to Nawahada stays for that reason alone.

The lack of any sidewalks or pedestrian connections through both parking lots is also quite problematic.

Agreed! There's no need for that alley along BK's parking lot. It certainly wouldn't hurt to have this happen...
You do not have the required permissions to view the files attached to this post.

^It sounds like the Snelling Ave extension will be the only way to access the gas station/Burger king from 46th st. This is from an email I received from Andrew Johnson earlier this summer

"Public Works will be closing off the in/out for Holiday and the strip mall, and that traffic will be directed through the extension of Snelling Avenue, which will include new signals (that are also timed with those on Minnehaha)."

Granted, that Holiday is near my house and I do use it from time to time. But I'd much prefer to see both Holiday & Burger King lots redeveloped into something housing/retail-oriented. Maybe even a new Walgreens in the base of a building - freeing up the Walgreens across 46th to become something more dense too! Can you imagine....
Post Reply
110 posts