Was it purchased over the bar? Cash transactions over the bar sometimes don't collect a line-item tax, to keep dollar amounts even for easy change. I think there needs to be a notification somewhere at the bar. The 'bar register' is the only place where this is allowed.

No, this was at a booth, paid with a credit card.

One thing I noticed is that they are not collecting tax. My bill was $10 for a $10 drink with no tax line on the receipt. That seems like trouble to me.

Maybe they're including tax in the stated price, as I really wish would be the regular practice (and as it tends to be in Europe). 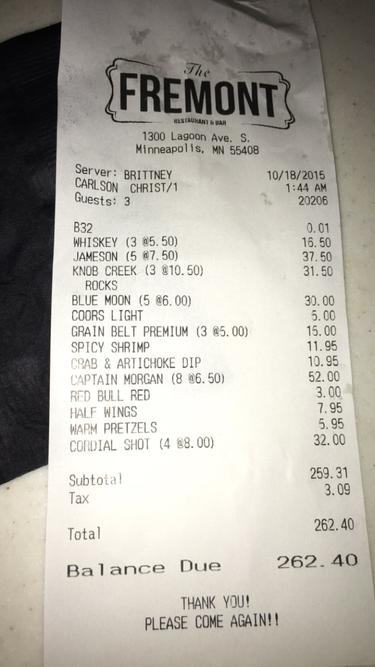 That's 8.4% on your food. My guess would be that the drinks all have the tax included in the sticker price, so the system doesn't charge tax against them.
Peter Bajurny
peter@bajurny.us
@FISHMANPET

That's 8.4% on your food. My guess would be that the drinks all have the tax included in the sticker price, so the system doesn't charge tax against them.

FYI, I got an order of the XXL? wings from The Fremont. Mother of god. I like hot but a lick of those will put you into tears. We asked a member of the kitchen staff who said they use the Carolina Reaper pepper which is twice as hot as ghost peppers. They said they're probably going to setup a challenge around the wings soon.

I hope no one was driving a motor vehicle, much less a bicycle.
Q. What, what? A. In da butt.

Was there any clarity on the Caffrey's situation? They are closed right now, and phone just goes to the busy tone.

^Not sure. I have been back there twice since "the troubles" and things seemed to be in order. The owner was working both times. There were signs posted on the door noting that they were re-staffing late night hours and would be closing much earlier (10pm?) than their usual 3am closings. I too encountered a busy signal on the phone last week. It actually would've been the first time I'd ever gotten delivery in the 5 years I've lived in the 'hood. I always walk or bike there...never had a compelling reason to pay extra for delivery+tip (I'm a cheap ass).

In sad news, the owner of Chiang Mai Thai is calling it quits after 17 years in Calhoun Square. Sounds like he just didn't have the energy for another 5 year lease. I'm not sure why selling wasn't an option.... though the tight concentration of Thai joints over there was probably a bit more than the market could bear, I ALWAYS have preferred Chiang Mai to Amazing Thailand or Tum Rup. They had the best happy hour deals too.

What I still don't understand, Are they closing the main branch in the Sons of Norway building or not?

More banking in the future will be done remotely with very little actual needing to go to a branch in the next 5 years. Glad they cut back on the number of drive thru windows as well. The current arrangement is pure overkill.

So what's the deal with Marche? Rarely have I seen more than 2-4 people inside as I drive by. Are they on their last leg?

Wondered the same thing. Everytime I'm in LynnLake it looks dead as hell.

It's been like that for months. I don't think I have ever witnessed more than three people in there.

I think that part of it is it's design. It looks more like a part of the lobby that many figure is not open to the public. Need some signage everyone welcome.

I too have never seen more than 5 people in there at anytime. I don't know how is in charge of managing and marketing that place but they should be fired. The place itself is uninviting and doesn't really stick out of Lime. As far as I can tell, they haven't put any money into any sort of marketing or trying to have events there. It also seems like the ownership is happy with just the residents of Lime going there which will never get close to filling the place.

I think the Marche is more of an apartment amenity an a money maker. I liken it to the outdoor bar that they have in the summer time in the Flux courtyard. Pretty much private. Still I think they could do a few things to increase patronage.

Is it any good? I've been meaning to go since moving into the neighborhood, but literally always forget it's there.

Not a clue, Morrissey's and Herrmikers are the 2 neighborhood bars I will go to in the Lynlake area. But I do know that Marche's has some happy hour specials that sound decent. My coffee is Muddy Water's in Lynlake.
Last edited by Wedgeguy on November 18th, 2015, 10:28 pm, edited 2 times in total.

I've grabbed a coffee (to go) in the morning, back when I lived closer. I have never felt anywhere near comfortable enough to actually sit down and drink a coffee or beer there. No matter what, you are always going to feel like an outsider, because in your mind, everyone else in the place lives at Lime. I don't really fault that on the design or anything - the layout of the place is probably as good as it can be for an apartment lobby that tries to feel public - it just is what it is. Perhaps if they tried harder to make it feel like a coffee shop, and really pushed that aspect of the business, it would do a little better.
Post Reply
1597 posts