Video from the city of the installation of solar panels at the ballpark
Mike Hicks
https://hizeph400.blogspot.com/

The Saints' regular season has wrapped up, and they've apparently had their best year ever. The team had a record of 74 wins against 26 losses, and will be going on to the American Association playoffs.

The attendance at CHS Field was 404,528, which was more than 100,000 higher than the previous record at Midway Stadium. The article says they had an average of 8,091 people at each game, so they've been able to fill the 7,210 seats and then some for the year. Reportedly this is 3,000 more than the average attendance in any of the other American Association stadiums, though I think they're all smaller markets.

Anyway, we'll have to see if this holds for future seasons.

Many are much smaller markets. But the closest in attendance are Winnipeg and Kansas City, which aren't tiny.

They were basically neck and neck with KC and the 'Peg in 2014 at Midway.

CHS Field had a nice write up in the August 15 issues of Architecture magazine, that I looked at today in the main library.

The real glory of CHS Field is all the taps in the craft brewery area. A few dozen craft beers to choose from, representing a variety of styles from a variety of (mostly local) breweries. I don't know if Target Field has anything as good yet, but it's certainly no better. And the beer was somewhat reasonably priced for ballpark beer, to boot.

I took a picture of their amazing taps that I was going to upload, but after first being told the picture was too large a file, then that it was too high a resolution, and then, once all criteria had been met, that the board was at its upload quota, I decided to hell with it. I know, I can upload it somewhere else and link to it here, but honestly it's not worth the trouble. Sorry. There was a whole line of taps from different breweries anyway, a beautiful sight at a ballpark.

I'd venture to say that Target Field would have some compete clause issues with Budweiser having those naming rights. But they do see a variety of beers brands from the walking vendors, so who knows.

Target Field has lots of local beers. They also have lots of non-local beers, including many from Budweiser's biggest competitor, MillerCoors. So yeah, who knows?

http://minnesota.twins.mlb.com/min/ball ... oncessions
http://growlermag.com/new-beers-and-mor ... d-in-2015/
The problem with being an introvert online is that no one knows you're just hanging out and listening.

Has Midway Stadium been demolished yet? Haven't heard anything recently and hardly ever get over to that area.

Has Midway Stadium been demolished yet? Haven't heard anything recently and hardly ever get over to that area.

It's demolished alright. Saw most of the stadium gone when I saw it on one of the express buses leaving the State Fair this year.

Sorry, no pics.
Buildings, what buildings?

Don't remember if it was here or Twitter or somewhere else, but I feel like I saw some pictures of it being torn down, but my mind also straight up fabricates a lot of little memories like that so who knows. I've seen a lot of pictures of a lot of equipment tearing down a lot of buildings on lots of websites, so it all gets jumbled together.
Peter Bajurny
peter@bajurny.us
@FISHMANPET 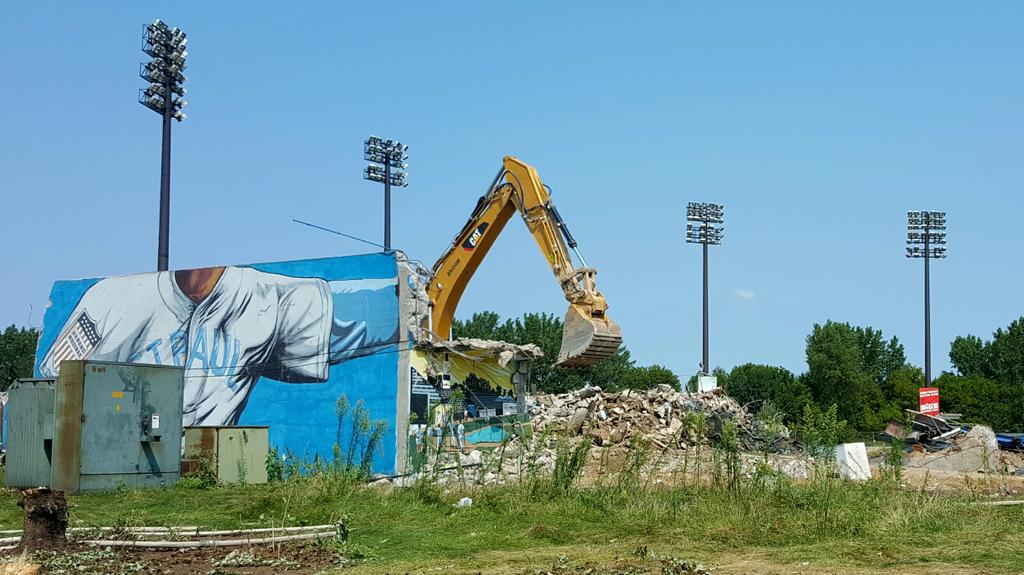 Not sure where else to post this, but the Twins and MLB are continuing in their pursuit of the Saints leaving independent ball and becoming the Twins new AAA affiliate. This has been talked about since late '19, when MLB announced a massive realignment and contraction of minor league teams. It's been rumored all along that if the Saints aren't interested, the Twins new AAA affiliate will be in Sioux Falls, which currently hosts another American Association team (same indy league as the Saints). The Twins and MLB's preference is the Saints, for a bunch of obvious reasons (way bigger market, larger ballpark, more corporate sponsorships, easier AAA callups, etc.)

If you already knew all of that, the latest is that the Twins have informed the Rochester (NY) Red Wings that they are terminating their affiliation. The Red Wings have been the Twins AAA club since the early 00s.

It sounds like Saints ownership has a more open mind than they did a year ago, but some key details remain, since they would have to pay MLB $20MM to become a AAA team. It will largely come down to how much of that cost will be paid by the Twins vs. the Saints.

I hope that the Saints wouldn't lose so much of what makes them fun, but I'm not too worried about that, the baseball players have always mostly just played baseball. It would be a great deal for Twins fans, Twins prospects, and the Twins.

The article says the 10k+ seat minimum would be waived, but I wonder if CHS could easily add another bleacher section or two? Probably outfield would be easiest. I love the compact feel of it as it is, though.

The article says the 10k+ seat minimum would be waived, but I wonder if CHS could easily add another bleacher section or two? Probably outfield would be easiest. I love the compact feel of it as it is, though.

I hope they wouldn't do that without adding concession capacity to match. Another craft beer corner would be nice.

Based on the Strib comments, Twins fans are almost universally in favor of this move. I've never seen so much agreement in a Strib comment thread, ever. Especially when said topic is regarding a pretty big change. People are generally wedded to the status quo on everything, no matter the subject.

Sioux Falls Stadium (where the Canaries play) is even smaller than CHS field - 4,500 seats. I'm assuming if they were selected that significant stadium upgrades would be a part of the deal.
Post Reply
284 posts