by gcm
"Timberland Partners is nearing a deal to buy the 101-year-old Sibley Square office building in downtown St. Paul, with plans to convert the building to market-rate apartments."

This building has large windows that should make for a nice conversion.

by mamundsen
There were a few comments about this one in the St Paul General thread already. How do we decide if a project gets it's own thread?

How do we decide if a project gets it's own thread?

It kinda depends on the amount of conversation we expect from a particular project. As a straightforward conversion of an existing building, this one is probably borderline. Part of that is not having many (any?) members living in downtown St. Paul to provide regular updates either. If this doesn't attract a ton of attention, it will probably get folded into the general thread.

by nickmgray
This will make a nice apartment building. I'm sure the owner of the building will make a lot more money with apartments since I know most of the office space in the building has been vacant for quite some time. Removing 236,000 square feet of office space from downtown Saint Paul isn't much, but removing excess inventory in an older building help put pressure on the market for something new in the coming years.

by mattaudio
I hope to see the reduction in total office SF in the St. Paul CBD cause renovations/updates of 60s-80s office stock (including exterior improvements and sidewalk humanization) before we see much new office space.

How do we decide if a project gets it's own thread?

It kinda depends on the amount of conversation we expect from a particular project. As a straightforward conversion of an existing building, this one is probably borderline. Part of that is not having many (any?) members living in downtown St. Paul to provide regular updates either. If this doesn't attract a ton of attention, it will probably get folded into the general thread.

Ha ha !! I just moved next this building a month ago. Always lived in Mpls and the move may be temporary at the same time I'm deffinitly learning about St. Paul

by at40man
It has long-seemed like they had been putting the minimum required maintenance in this building. The skyway level smells weird, and I don't think I have ever seen the big light fixture in the main entrance lit up.

by mulad
The Social Security Administration has offices in this building -- does anyone know where they might be moving? I think they have incidents resulting in police responses on a fairly regular basis, unfortunately...

by Wedgeguy
With relationship to the LRT station, this should be a home run for filling up fast once they get it converted. Not to mention that it is kitty corner from Mear's Park. It has all the making of a success as long as they do a good job with the renovations. The units facing the alley maybe a hard sell if they do units there, But those facing the street should be picked up very quickly.

Walking by today I saw that there are windows facing the alley so there can be unit there. But you will have no view and the alley was pretty dark. But is you spent little time in your apartment and only really sleep there and spend time there at night, it might we worth the cheaper rent.

by ProspectPete
I wonder what the timeline is for a project like this. I guess it's not fair to compare it to the Rayette since there were no tenants to move nor was there any "demolition". I imagine that this whole building will need to be essentially gutted, where as the Rayette already was so. Numbers wise, this and the Custom House should be a significant population addition to Lowertown.
But, back to my query, with having to let the current leases expire or evict business and tenants, plus a year or two for demolition and renovation... are we looking at about 4-5 years?

by ProspectPete
I guess this article answers the question that I asked a few months ago. It looks like they want to start construction this fall.

by schmitzm03
I saw a sign in the skyway today saying Sibley Square would be closed to through traffic from 1/22/16 to 3/2017 due to construction. Maybe this is finally happening?

by seanrichardryan
'Timberland Partners has begun construction of 333 on the Park', a $41 million market-rate apartment complex at 333 Sibley St., between Mears Park and downtown St. Paul’s Union Depot.http://www.twincities.com/2016/02/09/33 ... n-st-paul/

I'm excited about this:

commercial space on first and second floor at the skyway connection

by mulad
The Social Security Administration office has moved over to the First Bank Building (apparently they're accessed through the ground-floor entry on the corner nearest 5th Street & Minnesota Street). I took this picture of the signage at the skyway entrance to the building a few days ago. 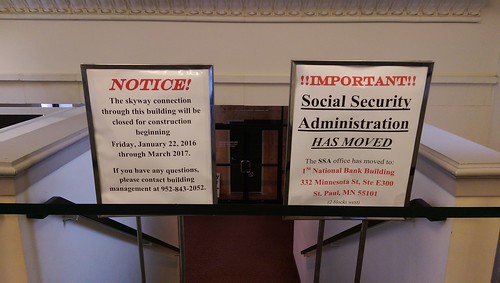 by mulad
A leasing office is now open on the skyway level of the 180 East Fifth building for this project. They're still expecting to open in March 2017.

by gcm
Anyone know if they are planning on replacing the windows with something more aesthetic?

by ProspectPete
I was just wondering the same thing. It looks like they are already doing interior work, so my guess is that they will be leaving the old windows in. I like how on the Rayette building remodel, the windows can be opened.

by Shearwater
Certainly nothing in the renderings supports the idea that windows will open. I was trying looking at it from WOB a couple of weeks ago, trying to decide when those windows were last replaced. They don't look original. If they are of relatively recent enough vintage, it might be that the developers didn't see a compelling need to upgrade.

by Shearwater
333 on the Park is now open for tours. We're planning on attending an open house Thursday afternoon.
All times are UTC-06:00
Page 1 of 2
Powered by phpBB® Forum Software © phpBB Limited
https://www.phpbb.com/