The Most Livable City in America™
Post Reply
145 posts

There is still a Saint Paul sign in the pictures; it's just not as big or noticeable.

I know but the first sign big neon sign was so much better than those dinky backlit letters at the top of the building.

Looks like the job site trailer is being set up here (Krauss- Anderson).

Yesteday they started moving dirt on the site with heavy equipment. More jersey barriers going up as well.

I'm assuming the garage entrance will be on Ellis Avenue, similar to the Metro Lofts garage. But has anyone seen plans that indicate what the Ellis side of this building will look like?

I think you are right about the garage entrance being on Ellis. I guess Emerald would be a possibility as well.
I spoke with one of the contractors there and he told me that they were going to have 2 stories of underground parking up against University Ave, which makes sense since it is quite a grade between Ellis and University.

They have a construction cam. Still working on the underground level, never realized how massive this building is going to be!

Has anyone ever seen the full plans for this site? Now that they're above ground on two sides I'm curious as to how they're going to handle the slope from University down to Emerald. Without first-floor walk ups here, there could be pretty big blank walls at street level.

Also, when searching the Internet I found this (student?) proposal that I'm sure mattaudio would have loved.

I hadn't seen this website before on this thread.

I read this as the building not planning for having retail on the first floor.

That was discussed a little bit upthread. And you're right, it sounds like the building will have no actual leasable commercial space. A pretty big disappointment at this location.

I'm also pretty sure they tweaked the language. Originally the wording was still vague but had the word retail, I believe.

Agree this is disappointing, especially because pre-recession it was going to be a Mississippi Market. At the same time, Metro Lofts next door has a small retail space that was once an ecigarette store and then a Metro PCS. Metro PCS is still fully stocked but appears to have been shuttered for weeks. I try to think of what type of business makes sense here but it's hard to say. We have two coffee shops, a gym, a small independent drug store, a bank and a dirty gas station. So I think any new retail would have to be something more significant, like a grocery store or a full-service restaurant.

Will have to see what the Fresh Thyme brings as far as customers to the area. Hopefully there should be some cross patronage in the area. I can't believe with all of the apartments there is not some retail that these people could really use. Unfortunately Dinkytown /Stadium Village got the drug stores covered already.

Tower crane is up.

Up to the third floor. Of note, they closed the University Ave sidewalk, with no alternative pedestrian routing. #shame

Emerald has been pretty impassable most days too. 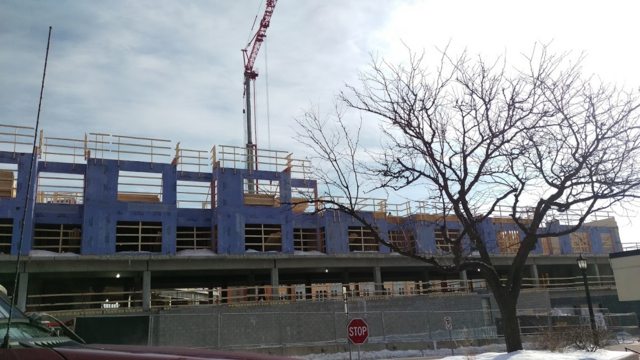 As it's playing out, it looks like there will be some long windowless stretches along Emerald as it accounts for the gradual grade change.

Maybe they put a mural of a grocery storefront on that blank wall.

Meanwhile just 5 blocks away in Mpls... a 15 story apt building going up with an actual street level grocery store.

Up to the third floor. Of note, they closed the University Ave sidewalk, with no alternative pedestrian routing. #shame

Emerald has been pretty impassable most days too.

I walked that stretch not too long ago - I thought I was going to die.

This appears to be topped off along University and the corner, and for the rest they seem to be building floors 2-6 one section at a time rather than building floor 2, then 3, then 4, etc.

The renderings never showed the Ellis Avenue side of the building, but there are now frames in place for walk-up units. That's good; however, it appears there will be a large blank wall fronting much of Emerald Street.

One question I have is whether the building will all be the same height or whether it will step down, since there is quite a big drop from University to Ellis.
Post Reply
145 posts