The last part of the complex at the SE corner of 100 and 77th is now gone, as the holdout daycare building has been vacated and demolished. The slate is now clean.
The problem with being an introvert online is that no one knows you're just hanging out and listening.

With the office market limp, and residential in very high demand, the Pentagon Park redevelopment switching to heavily residential.

I kept meaning to dig up this thread and note that the super awful graphics touting Apple Stores and whatnot have been long gone from the fences on site...but then I didn't because ¯\_(ツ)_/¯
The problem with being an introvert online is that no one knows you're just hanging out and listening.

Interesting. That seems like a pretty big chunk to bite off for an HRA. I'd like to see something happen here, but I'd sort of prefer more redevelopment stay concentrated in the heart of the Southdale District first.

Victoria-based Solomon is pitching a pair of medical office buildings of five or six stories. One would total 100,000 square feet and the other would be slightly larger, at 110,000 square feet, according to a narrative submitted to the city.

The project also would include a pair of five-story, 150-room hotels, two parking ramps and 5,000 square feet of retail space.
Edina city officials and Solomon could not be reached for comment.

The site is just steps from where United Properties and the city of Bloomington have been working on a project to build a 175,000-square-foot medical office campus for Allina Health System. The two projects are very similar, though on different sides of the Edina-Bloomington border. Solomon's pitch for Edina doesn't name a tenant. 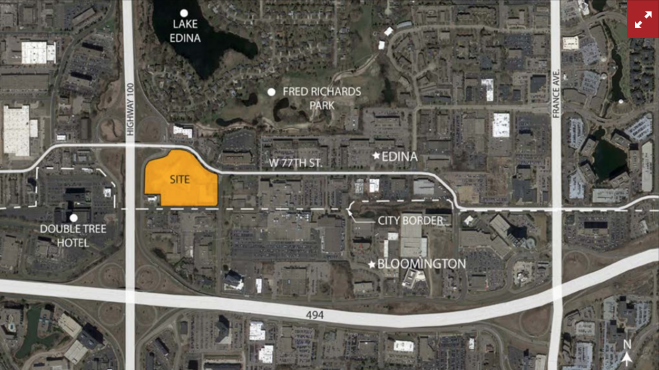 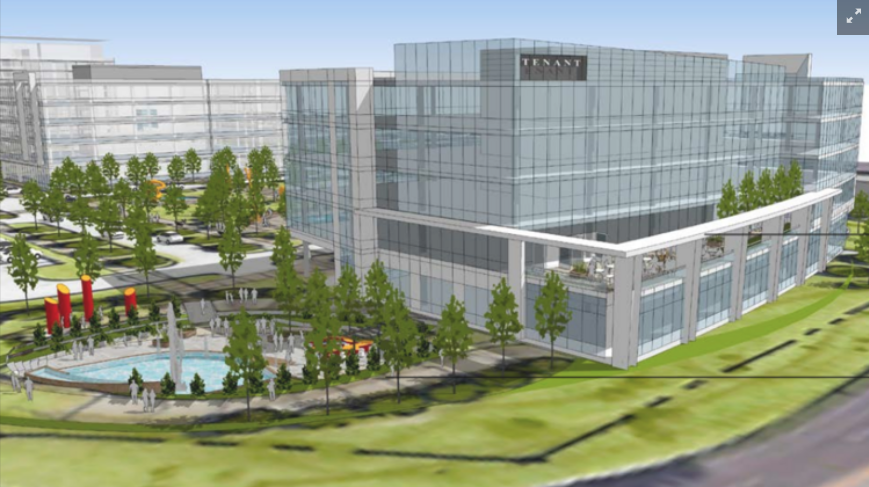 Not quite as cool as the previous plan for a taller building with a "Centennial Lakes-inspired" overpass of 77th to go from that building to Fred Richards Park and the regional trail. But still pretty nice. I work across the street from this and would love to see something happen -- or at least for the site to be fully cleaned up from the demolished building.

Seems Edina wasn't all that impressed with this first pitch...

Did anyone see the Pentagon Park North sketch plan presented at the Dec 13 Planning Commission meeting?

Some thoughtful work (underground parking that, despite the flood plain, leaves the first story within 3 steps of ground level; breaks up the lot a little) ultimately feels very suburban.

My jaw dropped when the architect said they were modeling it after Excelsior & Grand, which he termed a “classic style that will last the years”.

Also a refusal to have any mixed use—it’s apartments (incl. senior) only, partly because that’s all they know how to build (when all you have is a hammer…). Some people/planners/architects still seem to think “walkability” is just about greenery. But you need destinations.

While it’s not perfect, if a development fails to increase the Walk Score then “walkability” is a bunch of “el oh el nothing even matters...”

Here's the packet for the Dec 13 meeting, which featured an update on the residential developments on the north side of 77th:
https://edina.novusagenda.com/AgendaPub ... tingID=265

Details about the south parcel (office) are in the Nov 29 meeting agenda:
https://edina.novusagenda.com/AgendaPub ... tingID=798

Dear God that is a lot of surface parking -- but apparently 28 too few spots for Edina code. One of the most bizarre things about Edina's multi-family parking code is that they actually require a certain proportion of the spots be surface parking. Even if cost is no option, you may not fulfill your parking requirement with only structured parking. In practice, they don't seem to have really insisted on this, but I don't think it should be in the code. So many of Edina's developments are expensive enough, they probably could satisfy Edina's massive parking requirements without doing surface at all.

I think the change to mostly residential is OK, but it would have been nice to have some space reserved for future commercial -- even a gas station or coffee shop would provide something to walk to.

But, yeah, the regional trail & large park with be a huge draw. Even with amenities inside the park, some people will always want something different (more or less formal/expensive, different cuisines) and cafes, ice cream shops, restaurants, etc. nearby would likely be a big draw.

And I imagine lots of municipalities ignore large portions of their code. As a developer, you gotta pay attention to whoever’s making the decisions today.

They've upped their game the last 10 or so years with more urban-friendly formats that have direct sidewalk frontage, minimize pumps, and have more fresh grocery to actually serve as a decent bodega. I think the biggest issue is just the gas pump area. In a perfect world, it would be cool to see them interior to the building, like having the retail portion in front of a parking garage and having the pump area inside the parking ramp. That is fairly common in both Oslo and Copenhagen and really mitigates the negative impacts of having that area. But, so far we haven't even done that in downtown Minneapolis, so a more conventional gas station is probably more reasonable here.


But, yeah, the regional trail & large park with be a huge draw. Even with amenities inside the park, some people will always want something different (more or less formal/expensive, different cuisines) and cafes, ice cream shops, restaurants, etc. nearby would likely be a big draw.

They're nice, but with Centennial Lakes only a mile away, it would be hard to picture them making a go of another major commercial urban park. I see this as more of a neighborhood focus -- including the office workers and this new residential. Could be room for some stuff, but I can't see sustaining a huge mix here.

The Oslo & Copenhagen gas stations you describe sound much better than what we have, and possibly fit with a charging station for electric cars. It seems to me, though, that not only are we at max highways and max parking—we’re also at max gas stations. I can’t see many (any?) new gas stations within the 494/694 built-up areas. If anything, we’ll continue to lose them as cars get ever-better mileage and electric cars start to replace them.

The plans for Fred Richards Park are much more ambitious than a neighborhood park. Edina, I think, is shooting for 3 great parks: Centennial Lakes, Braemar, & Fred Richards.

Centennial Lakes is the urban park, with lots of concrete (paths, bridges, seating), buildings/services, retail, and amenities. A recreational city, if you will.

Braemar, which the city council recently approved a remake of, is the pro/sporting park (think how many sports figures live nearby), with a high-end golf course, cross-country skiing, mountain bike trails, ball fields, & hockey arena, along with tennis/pickleball and walking paths.

Fred Richards Park, while it will have a central building, playground areas, and a bicycle track, is more of a nature-oriented, open-space park. Last I saw, it was not going to have dedicated soccer fields, but rather a large, open lawn on one side, the regional trail running through it, and a nature area on the other (wet) side, with educational opportunities and nature viewing platforms.

These 3 major city parks will complement each other, rather than compete with each other.

That being said, Fred Richards is a buffer between single family homes and a dense commercial/residential area. There will be lots of people—workers during the weekday, residents & trail users at night and on weekends—that will be drawn to the park. It’s mostly office space within walking distance, so a small retail/entertainment/food corridor along 77th and/or the north/south entrance to the park makes sense.

This kind off flew under the radar the other week because it's buried in the West Metro Briefs. The City has approved the redevelopment of the southern parcel, with two hotels in phase one and two office buildings plus retail in phase two.

I office in one of the remaining pentagon office buildings. Our landlord has a lease amendment to move us into one of the eastern buildings if their separate proposed redevelopment goes through on the west side of the northern parcel.

The proposed development of apartments and senior apartments goes in front of the city council for approval tonight. The city planning commission has already rejected this because their proposal isn't dense enough. From what my landlord tells me the soil quality in this area is too poor to support anything above what they're proposing without pile driving over a hundred feet. So the fate of this moving forward rests in the hands of the city council, and since they'd have to ignore their planning commission and listen to the developer I don't have high hopes.

The Edina City Council on Tuesday night voted against a Planning Commission recommendation and gave the green light for a 585-unit housing development on the former Pentagon Park office campus near 494 and Highway 100.

Burnsville-based Chase Real Estate Inc. is planning to build 360 market rate apartments and 225 senior housing units on 10.9 acres next to the former Fred Richards golf course, which will become a park. ...

Also, a bit more on the southern portion in the article:

Last month, the city approved another project that will also re-shape the 41-acre Pentagon Park campus and make it into a mixed-use area. Victoria-based Solomon Real Estate Group got the go-ahead to redevelop 12.5 acres at 77th Street and Computer Avenue with a pair of hotels, 11,800 square feet of retail and a parking ramp in the first phase. A second phase would add two five-story office buildings and more retail space.

That Edina City Council sure does not seem to agree much with their Planning Commission -- after rejecting a couple (*much* better IMO) Southdale projects that the PC recommended approval of, here they're approving what PC said to deny. *shrug*

It's a really distorted sense of priority when this low-slung, surface-parking-heavy use wins Council approve while a project like Estelle is rejected 4-1.

But suburban aesthetic and amount of surface parking notwithstanding -- it's not too bad. The buildings look nice, and it is nice to add a good number of units. I office out of the ground floor of Burgundy Place on the west end of the park, and it will be nice to see something filled in.

But like anything in this Pentagon area, I'll believe it when I see it. There continue to be conceptually great proposals and absolutely nothing happens on the ground. Fred Richards and the trail are nice, but there's not much else around here, and it's a long walk (and challenging bike ride) to access anything in more central Southdale area. If I were looking for housing in this general area, I would definitely choose Onyx, 71 France, or One Southdale over this location.

Didn’t the PC deny the Caribou drive through but the council opened their arms for it?

Affordable housing in the northwest corner may be added.