Gotta love people who cling to their "bubbles", even though nowhere is 100% immune to issues, including "Chancasver". It's amazing to me that people still live and think this way -- isolated from others.

There was a property right near my house that was a hot property last week in the Strib: http://www.startribune.com/local/west/301123121.html

Details: A group led by a veteran Twin Cities developer struck a purchase agreement for a city-owned parcel in Chanhassen with plans to build up to 10,500 square feet of offices.

The Red-E-Mix site is in the northwest quadrant of the Hwy. 5 / 101 intersection that was once used as a cement mixing facility. The city acquired it through condemnation in the 1990s and used it most recently for snow storage.

The City Council this month approved a $500,000 purchase agreement for the 1.29-acre lot with RBSC Chanhassen LLC, led by Randall Schold of Eden Prairie. Schold is co-president of North Dakota-based MetroPlains, which has developed more than 100 Midwestern properties since 1978. He said he’s undertaking the Chanhassen effort independently of the firm.

According to plans submitted to the city, the first phase of the project is to be a 4,500-square-foot medical office building, with a 6,000-square-foot office building possible in a future second phase. Schold said he is talking with possible tenants for the medical building. City planners told the council an unnamed tenant “that already has a business in town” had been lined up.

Renderings from Minneapolis-based MSR Architecture show landscaping including a “bioswale” to collect roof runoff and stocked with native plantings to attract butterflies. Also part of the plans are “meditation groves” featuring native trees with seasonal attributes, such as spring flowerings and autumnal colors. 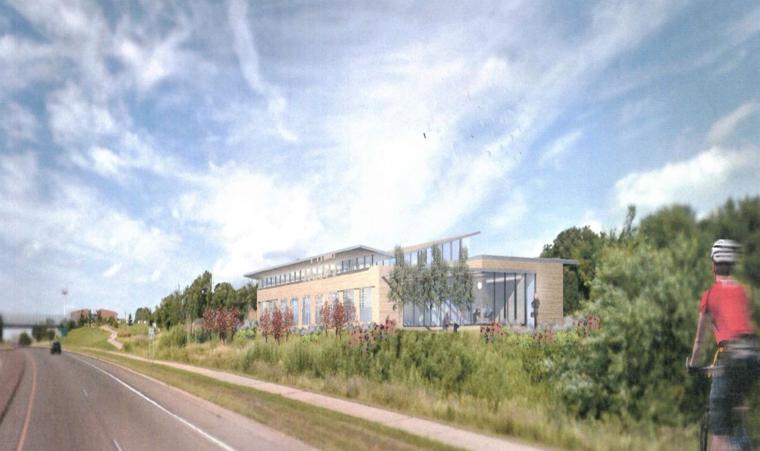 Still a better plan than 420 Hennepin

This would also result in the loss of Vikings marketing staff that are currently in 1010 Metrodome Square (the old Strutwear Knitting Company building) on 6th Street in Elliot Park.

I take it at face value. What they want is more office space and more practice fields. They can always rent a nearby office building but I don't see any room for more football fields.

This is as close as we have to a Downtown Chaska thread?

Popularity of Chaska curling club has blown away expectations

It’s perfectly positioned halfway between 212 and 169. And they’ve virtually cornered the market on curling anywhere within a 20-minute drive. All of which is populated by folks with outsized disposable income and leisure time. So I’m suprised by how conservative their membership estimates were.

Anyone know where exactly it is and what's left? Is this near the Clover Field development?

"...linked to the Twin Cities via some sort of high speed rail system, much like the Satellite Cities of Stockholm..." Wish it would've came to fruition, though who knows if it would've survived. I assume at the time it would be relatively easy to build with the then Milwaukee Road Pacific mainline nearby.

You are in the right area near Clover Field . It is off Hundertmark Rd west of Highway 41.

Yep, they're basically right next to each other. Clover Field is "A Jonathan Neighborhood" -- I think there's a neighborhood association that is a holdover from the original development. 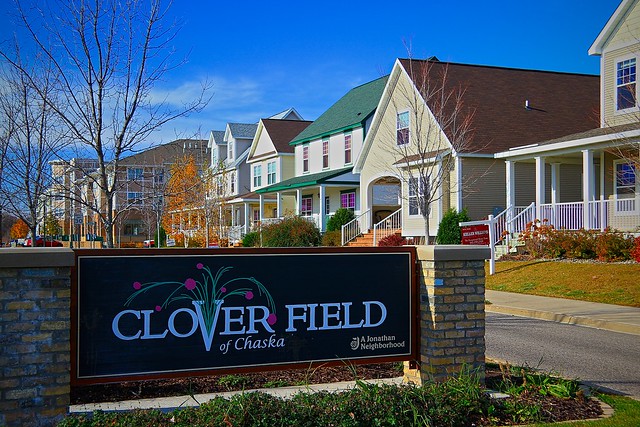 But other than having a few more bike/ped paths than a typical suburban area and the fancy communication technology, the area doesn't seem much different than other suburbs in the region -- perhaps actually more sprawling and podded off than what is usually found.

It looks like the original commercial hub on Lake Grace is about 1.5 miles from the edge of Clover Field, on Village Road. That particular spot died off, but there's a typical big-box shopping area just northeast of there around the intersection of Chestnut Street and Pioneer trail. There are more townhomes and apartments near the Lake Grace hub, but the neighborhood is pretty poorly interconnected (the trails help some, but not a whole lot).

Clover Field appears to be a lot denser and a bit more mixed-use than the original Jonathan area.
Mike Hicks
https://hizeph400.blogspot.com/

It's no coincidence it's near the railroad tracks and the US 212 freeway- the original purpose of US 212 was to link Jonathan with the rest of the metro. Today it doesn't look much different from any suburb because the non-residential components never came to pass and the assumption was still that everyone wanted suburban style houses and townhouses. albeit with internet and nice trails in the back, something completely lacking other areas that developed at the same time, say west Blooomington. Also the idea was to have clusters of suburban growth with green space around; now that the space have been developed Jonathan is even more indistinguishable.

A couple of bits of news:

Looks like MnDOT and local officials are closing on a 4-to-3 lane conversion for MN-41 in downtown Chaska, which should help the pedestrian friendliness of that stretch substantially.

And Chanhassen's 'lifestyle center' development at 212 and Powers is back again, this time called "Avienda". Despite the snazzy branding, it seems to more-or-less be a similar mix of office, retail, and residential as more recent incarnations (by my count we're on at least version 3 or 4 here unlike the Villager story which calls this 'Take 2').

41 reducing from 4 to 3 is going to be a huge test for our state. If this is pulled off advocates will no longer have to point at out of state examples of 4–3 conversions.

Reading the consultants, I mean...

Currently, approximately 18,400 vehicles take the highway daily, according to Bolton & Menk Traffic Engineer Jake Bongard. Traffic on Highway 41 is anticipated to ultimately hit 22,000, according to engineers.

Officials believe that traffic flow would be maintained, since center lanes are currently blocked by cars turning left at Second and Fourth streets.

“We could determine it would work with 22,000-plus vehicles on the corridor,” Bongard said, following a traffic analysis. However, the analysis “did start to show some additional delay” when traffic models were increased to 26,000 vehicles a day.

“This will be one of the busiest three-lane roadways, probably in the state, once it’s built,” Johnson said.

I tried convincing Hopkins city council that Blake Road deserved to be converted from 5 to 3 when it only carries 15,000 cars today, especially since parallel to Blake had the 169 auxiliary lanes and Louisiana Ave just added roundabouts, any congestion on Blake would begin pushing drivers to the excess capacity on Louisiana and 169. The current mayor, then-councilmember, replied that the city needed all the lanes because the commercial redevelopment the city hoped would come to Blake would need all the traffic the extra lanes would allow and pointed to Chaska businesses expressing the view they needed 20,000 cars/day for viability. I wanted to smack my head on a wall but now reading that the Chaska downtown that was the example for why Blake needed to stay with extra lanes is going to shrink their lanes... it's salt in the wound. But good for Chaska!

Strib has an unlocked story about this. GAH STOP CALLING THIS MIXED USE.
http://www.startribune.com/chanhassen-p ... 399932921/

GAH STOP CALLING THIS MIXED USE.

I know this is an exciting new hobby horse on the forum, but...

Just because the words mean something very specific in your head doesn't mean that everybody else has to agree.

Well, "horizontal mixed use" is my pejorative term for it. But long ago we used to call these types of large areas with multiple land uses "neighborhoods."

That's why I call Kingfield a mixed-use development. It has housing, offices, and retail.

If Kingfield were developed today it would be called a mixed-use development.
Post Reply
110 posts