What about a bus+ambulance lane?

I don't think buses are delayed at all on this stretch so a bus lane doesn't really make sense. The turn lane is where ambulances would go.

Excelsior Blvd. is SO wide from Meadowbrook to the hospital not only because it is four lanes but also because of the ridiculously wide divider. That's a major reason traffic roars through that section.

Well I meant a bus+ambulance lane would mean all car traffic would be in 1 lane, thus slowing people down, while buses & ambulances would zip through.

The divider adds to the speed, but it’s mostly about there being no people or activity on the side of the road. Same thing happens at Minikahda, and there’s no divider there.

A couple weeks back the Met Council put up a post about the lengthy lift station construction going on in Hopkins.

This project is one part of what is having to be coordinated in the Blake Road reconstruction. But one thing that caused the cost of the new Hopkins lift station to climb is that a drill snapped off. Because the lift station is right next to a wetland the hole constantly filled with muddy groundwater. And they needed to hire a cold water winter diving crew to dive into the zero-visibility water to remove the broken drill before they could continue.

Alright I biked by Blake rd. today and and while the new sidewalks/multi-use trail are stating to shape up nice, are they really just using cement for them? This is just probably me having a biased for biking over walking (hell maybe cement is better for walking than asphalt), but there's something about biking on cement even when its designed to be biked on feels off, I was kinda hoping they would do the same with what they did with the artery between excelsior and mainstreet but know i'm just crossing my fingers they will but some form of markings down to separate walkers and bikers from having a figurative free for all.

Kinda got lost in recent discussion but the Artery Grand Opening 2.0 is September 22
https://www.hopkinsmn.com/CivicAlerts.aspx?AID=55

Sage Apartment Communities bought up a bunch of naturally occurring affordable apartments along SWLRT, including the Knollwood Towers East on Blake Rd in Hopkins.

Anyone know the history of Sage and their affordable units? Are they likely to remodel and market rate them?

Seems like Cargill continues to shrink their presence at Excelsior Crossing. One of the three buildings is now occupied by US Bank, consolidating various operations on the west metro there.

Now Digi International is relocating it’s HQ from the Opus Business Park to the top two floors of building B.

Does Cargill know something we don’t? Is SWLRT doomed?

I went to the Hopkins Farmers Market yesterday for the first time, and it was just so lovely how the downtown area feels so alive & vibrant. What a huge change from 20 years ago when it was a ghost town.

Does Cargill know something we don’t? Is SWLRT doomed?

Excelsior Crossings was always an unlikely walk from the stations. It’s kinda far. I think it’s more that certain operations are shrinking.
Digi, meanwhile, sold their previous HQ directly next to the Opus Station to a developer who is going to build almost 500 apartments.
Excelsior Crossings isn’t staying very vacant long in any case. I bet the Cedar Lake and North Cedar Lake trails, plus highway 169 plus Mainstreet nearby makes it attractive to some.

I went to the Hopkins Farmers Market yesterday for the first time, and it was just so lovely how the downtown area feels so alive & vibrant. What a huge change from 20 years ago when it was a ghost town.

It has been noticeable in the past few years and it certainly feels like there's a lot less vacant building in and around Mainstreet, think the only thing of note the actually closed on main was the Performing Arts schools a few years ago. There also is a lot more places to eat now since the only places people would go out and get food seemed to be Hoggies, Big 10, and Boston Garden.

Cream and Amber, a used bookstore/craft beer business just trying to get started posted a blog post on their struggle to meet city code requiring offstreet parking on Mainstreet in Hopkins.

You might wonder, what the hell is a Mainstreet business required to build parking for? Well. It’s a bit outside the section of downtown where off street parking isn’t required.

Every time I see something like this, I am now just going to say #IPCCreport

Doing some rough estimated on the little math problem they gave at the end:
+ 25 seats/3 per spot= 8.33333333 parking spaces
+ 960 sq ft/250 sq ft per 1 spot = 3.84 parking spaces
+ 2 on-street parking spaces
+ 1 parking space for a bike rack
+ 2 parking spaces because they are within 1/4 mile of a transit stop
rounds down to 17 parking spaces, 18 if Hopkins decides to round up...
Is there any reason why Hopkins shouldn't have the B-2 district (the district that doesn't require bushiness to provide off-street parking) encompass all if not most of Mainstreet. Maybe they addressed expanding it in the 2040 plan but currently it seems to be bounded between 8th ave to 11th ave. Heck it doesn't even fill out all of the Downtown Overlay District which according to the cities web page, is between 6th ave to 13th ave.

So which way does the city round? I'm guessing up.

With the exception of a food service restaurant and fitness center, Buidling B (the center building) at Excelsior crossings has been vacant for a while.

More on Cream and Amber’s nearing opening (shooting for December.

Was going through the Hopkins 2040 plan and noticed under goal 2 Accommodating Growth (page 103) they have a little bullet point saying
"Encourage an anchor development at the east end of Mainstreet that supports transit and complements Downtown Hopkins."
Since this is one of the few planned projects/development in Hopkins that is still up in the air, I figure it might be a little fun to try to make a few predictions to how it'll end up looking. 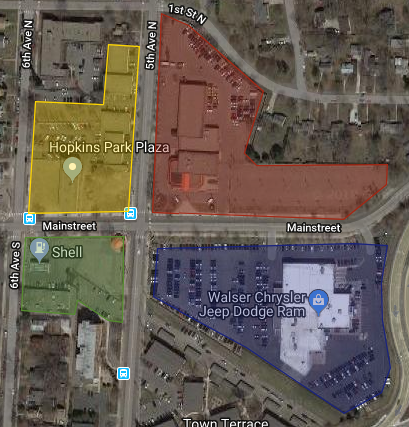 The area shaded in Blue I say would be the best in terms of development in an ideal world, but the main issue is whether or not Walser dealership is even interested in selling.
The area in Red would be my second choice but it quiet literally runs right next to single family homes and would probably limit density or risk running foul of some residents.
The area in Yellow iirc they've tried to develop it but have run into to some problems. Not completely sure whats happening with this since the only article I can find the mentioned this is locked (https://finance-commerce.com/2014/07/ho ... eet-sites/) and the only reason I vaguely know about it is from word of mouth from neighbors who regularly work with/at the city council.
The area in Green I honestly have no idea what they would use this for. Maybe make something similar to the Marketplace Lofts or the Marketplace and Main or even similar to the town houses they put up a while back, but none of those seem like they would really be considered an anchor development.

Well if they develop in the green area it’s going to be pretty difficult shoehorning some kind of transit on the old railroad bed (now the Lake Minnetonka LRT Regional Trail). But I suppose that will already be difficult.
Post Reply
285 posts