At this point I wish they'd consider leveling the southwest retail building at the corner of Gamble Dr. and Park Place Blvd. and rezone for multiuse and pile up apartments. I dunno, maybe have walk ups on the ground floor.

I've had the same thought ever since the deal for Entertainment 720 fell through.

I suppose it would depend on where the building footings are, how the underground parking is set up there, etc. Maybe you could just put a heavier, more complex building there with minimal changes to the foundation, maybe not (assuming that residents would use existing parking and that a new underground structure would not be created). This change was very unlikely as long as Duke owned the property, since they don't do residential development. I'm not sure what the new owner's prerogative is, but I'm sure they won't make any major changes until the build-out of Central Park West is complete. I'm sure their current hope is that the additional 500+ units in Millennium and CPW's two buildings plus hotel guests and office workers will give the whole area a boost. As others said though, it is quite a jaunt to the southern end of the retail area from any of this new development. It really does seem like it needs a residential/hotel bookend on the southern end.

On a more general/speculative note: I actually kind of want West End to fail (or at least not succeed) as a "boutique retail" destination. I DO hope it succeeds as a theater/restaurant/bar entertainment area. The office/hotel/residential areas are obviously already successful and will continue to be going forward - I don't think that's really in question. Personally, I'd rather see shopping be successful elsewhere, namely in other parts of SLP and Downtown, obviously. Long term, it would be better if the "Shops at West End" primarily served the daily needs of SLP residents and workers, not as a sort of mini-mall shopping destination.

I've also been thinking about what could be done to create more of a pedestrian feel to the whole area. IF such a mixed-use bookend existed at that south end, it sure would be nice to pop across the street and grab a coffee from Caribou but it would be a miserable/dangerous pedestrian experience.

Exactly. I've never understood what people see in this development that's any better than Maple Grove's faux Mainstreet. There's a parking ramp instead of a ginrmous lot, which is an improvement, but beyond that the concept is almost exactly the same.

A freeway armpit is not a downtown.

Isn't downtown Minneapolis basically the center of like 4 freeway armpits?

I'm glad I'm not the only person that thinks this way; I was starting to think it was just me and was wondering what about it I wasn't getting.

Which one of Maple Grove's four fauxstoric main streets?

I most likely missed this in the thread. But, what are they building at the SW corner of the 394/100 junction?

Exactly. I've never understood what people see in this development that's any better than Maple Grove's faux Mainstreet. There's a parking ramp instead of a ginrmous lot, which is an improvement, but beyond that the concept is almost exactly the same.

Actually, I think Main Street Maple Grove (the one north of Elm Creek Boulevard, mattaudio) is more legitimate than Shops at West End. In Maple Grove, the primary street is an actual public street, and there are several property owners (although not a different one for each building/unit). There are also public uses like the City Hall and Hennepin County Library. (Why exactly did Maple Grove Library warrant structured parking, while Uptown and Central Library are the only urban locations to have it?!)

I most likely missed this in the thread. But, what are they building at the SW corner of the 394/100 junction?

Check out page 3 of this thread. About halfway down. It has the layout of the offices, ramps, and more residential that is planned.

The tower crane is in place for the next residential building, whatever it is called.

AC Marriott proposal will be up for vote at the St. Louis Park city council tonight. 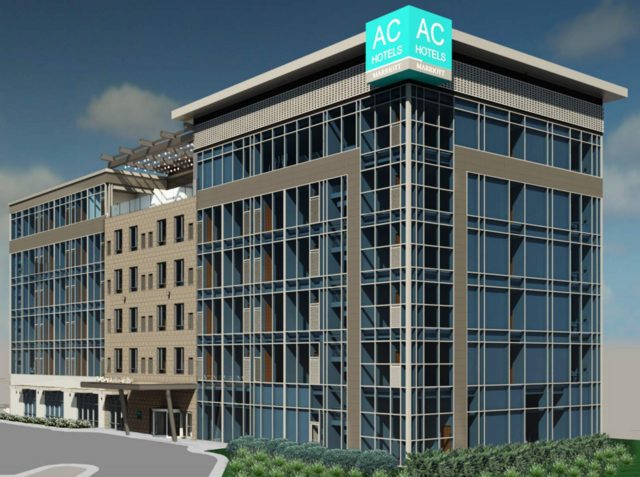 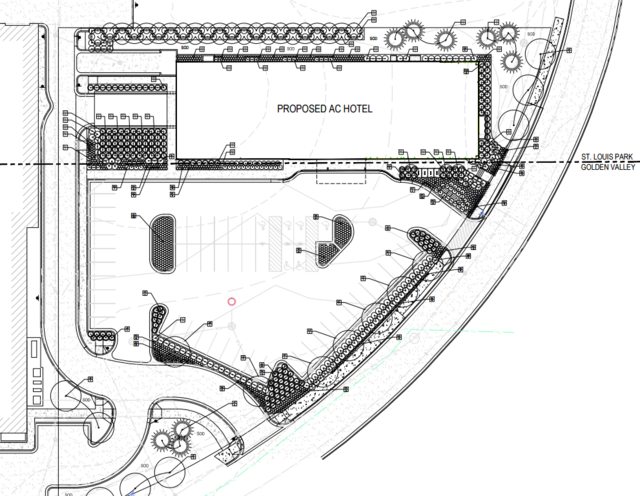 At least Golden Valley gets the taxes on the parking lot.

While its asinine to have an apartment straddle two cities and two school districts. I'm pretty sure no hotel was willing to deal with two different city regulations at the same time.

AC Marriott proposal will be up for vote at the St. Louis Park city council tonight.

Finance and Commerce just announce that Ryan will be building a 315,00 sq ft multi tenant office building here, but they gave no specifics or images.

Sounds like it's part of the Central Park West proposal? Locked so I can't see details.

Is that already underway in the pic, or is that crane/excavation for another project? I was in town last week and saw this site and I couldn't tell if they were getting started on an office project for the properties closest to Hwy. 100. 315K SF on a smallish parcel of land could mean a 10+ floor office building.

Great location -- I can't believe it has taken this long to build office here.

I think the apartments and hotel are what is happening now.

Yes, this is part of the previously approved Central Park West PUD. DLC sold off the office portion of the site to Excelsior Group / Ryan last year. The plan called for "two 11-story office buildings containing around 700,000 square feet of space and a parking ramp with more than 2,500 spaces." This would be the first of those two office buildings. Construction of the second building would obviously be dependent on how quickly the first one fills up and continued demand, etc.

Final approvals for the 11 story office tower by Golden Valley and SLP councils.

Golden Valley residents across 100 from this as usual still worried about heavy traffic. SLP council really likes the design of the tower.

I'm not sure what leverage Golden Valley has left to protect the South Tyrol Hills residents from the consequences of living next to West End. But maybe there needs to be some effort to get that fantasy link from Wayzata Blvd through the Target/old-Prudential campus to the dead end of Cedar Lake Road.
Post Reply
190 posts