I believe Minnesota courts have ruled that landlords cannot be required to accept Section 8, or at least that current law (which prohibits discrimination based on government assistance status) does not require it. Other states have not seen comparable rulings.

Also, most Sec 8 vouchers have a "max unit rent" attached to them, so a mom with two kids (for example) has to rent an apartment that normally would rent for under, say $975. Even if she would be willing to pay the difference herself, the county wouldn't allow it
Urbanist in the north woods

Last summer I think CM Glidden proposed that all landlords in Mpls are required to accept Section 8 vouchers. I'm not sure if it went anywhere, since I haven't heard about it since.

I had a Section 8 renter up until a few years ago in one of my homes, and the Section 8 portion of the rent check was a direct check from the county that administers the funds. The tenant pays the difference up to the full rent amount, if any. That may be the technicality that prevents local entities from requiring acceptance of Section 8 under the no-discrimination-of-income clause of housing law.

I believe the ruling was limited to determining that Section 8 program participants are not a protected class, so it's not discriminatory for landlords to choose not to rent to them based on their participation in the program. This ruling would prevent ordinance like Chicago's that use income discrimination as a basis for preventing landlords for not accepting tenants who are on Section 8, but I don't think that prevents cities from requiring the acceptance of tenants on Section 8 as a condition of receiving a rental license. I am, of course, no lawyer. There was a Federal requirement for purchasers of foreclosed property to continue the leases of existing tenants on Section 8 under the Protecting Tenants at Foreclosure Act of 2009, but there was a sunset terminating that provision in 2012. Still, it's an indication that it's constitutional for levels of government to require landlords to participate in the Section 8 program in some circumstances.

By the way, there is nothing that can reasonably be considered onerous to landlords about participating in the Section 8 program. It's a tiny bit of extra paperwork and, in some jurisdictions, showing up at annual inspections.

Also, max rent in the Section 8 program is usually income-based. I worked in Section 8 for six years is how I know (remember) this info.
"Who rescued whom!"

Richfield Audi is coming along. The concrete walls are mostly up, and the building has a pretty obvious shape from 494-5/78th St: 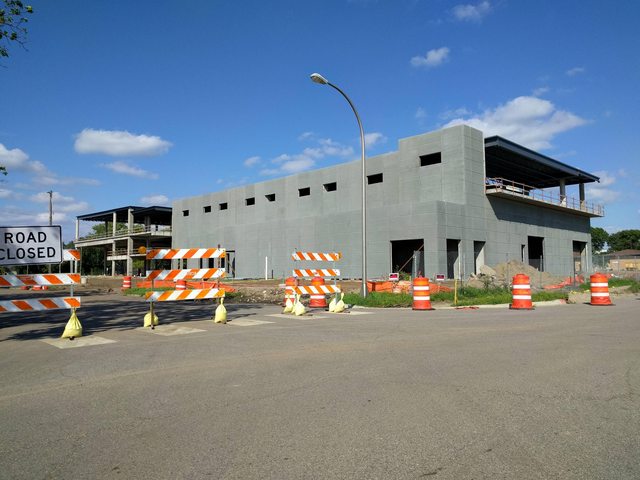 It will really be an imposing presence from 77th -- right up against the sidewalk, although unfortunately, it doesn't round out the corner at 14th: 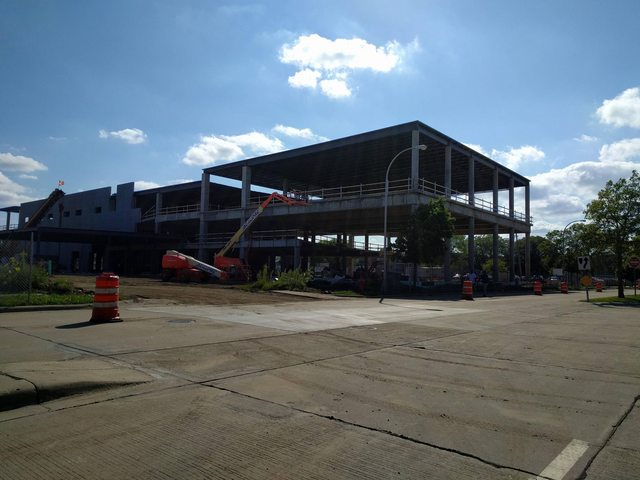 Filling the medium box stores at Shops at Lyndale is a challenge right now.

Wow, I remember when that was the "hot new" strip in the mid-late 90s... Didn't Richfield use eminent domain to buy up that strip, ostensibly to build 77th Stroad, but also to allow for this redevelopment? I remember we bought a Macintosh LCIII from some computer store in the old complex, and they talked about the plan to raze the entire frontage along 494 and replace with this. And now this struggles.

Shops at Lyndale appears to have replaced an older strip mall(s), apartment building, some light industrial property, a house or two, and Emerson Church (Emerson & 77th). The developer had to build the congregation a new building which still stands today at 76th & Girard. The "new" church is sort of awkwardly nestled into the Meridian Crossing 1 & 2 office tower development, built 4 years after Shops at Lyndale. I don't know if eminent domain was involved in CSM's development.

In the near term, I wish they'd attract a grocery store to take the old Borders or Sports Authority space

Naegele! Home of the Marlboro billboards! I'm really aging myself as an old Millenial now, aren't I?

Naegele! Home of the Marlboro billboards! I'm really aging myself as an old Millenial now, aren't I?

I grew up in Richfield and completely forgot about Naegele!! That's a flashback.

Re: Shops at Lyndale. Is there any precedent for retrofitting such structures to be more attractive to current demand? It seems like subdividing the Best Buy space to make room for Ulta is one good example of carving out some smaller retail spaces in the bigger boxes.

My least favorite thing about Shops at Lyndale is the way the entire development seems to have its back turned to Richfield -- for all modes, but especially pedestrians. In fact, the entire site has only a single access for pedestrians, a single staircase installed around 2012: https://www.google.com/maps/@44.8636901 ... 312!8i6656. There is no way for wheelchair users to access the site, other than by going through adjacent Richfield Liquor's accessible access and navigating across the parking lot.

Late January Richfield should learn if the federal government will come through with the final piece of funding to the 77th street tunnel under Cedar Ave.

If the funding comes through the Richfield mayor wants to rename/rebrand the 77th/76th street corridor as "International Boulevard". Edina has been favorable so far to extending the new name all the way to TH 100.

I doubt Bloomington would go for it, but why not extend the name all the way where the street turns south and meets 24th and change 24th's name also to International Blvd. Having MOA next to "International Blvd" would be a bit aspirational, eh?

There was a work session about this I was in attendance for (not actually a Planning Commission issue, but it was done at the same time as a joint PC work session).

I believe Richfield intends to go forward with International Blvd regardless of the completion of the Cedar Ave underpass, although the anticipation of that is building the momentum. The actual signage redo, I believe, is around $50,000. (The small signs on the street are cheap, but the City will have to pay the cost for MnDOT to change some signs at 35W.)

Richfield has coordinated with MAC so that International Blvd would begin at the 24th Ave junction, with the possibility of signing it at that location. Part of the goal of doing International Blvd is to have a simple, clean, east-west route on the north side of 494. Personally, I think curving it to go north-south would kind of spoil that goal, so I am not in favor of making 24th Ave part of that route.

Coordination with Edina is still up in the air. Edina has discussed doing as little as nothing, or as much as continuing it all the way to the 169 junction. Most likely is that it will end at TH 100, or at E Bush Lake Rd. Ending it at E Bush Lake Rd would avoid the existing confusion of 77th St versus the half-mile-long Industrial Blvd.

I'm unsure how to feel about the 348 households who are expected to update all of their documents to reflect the new name. With 12 to 18 months to do so, maybe the assumption is that there is enough turnover that not many will have to actually change. I have no idea about the typical length of tenancy in those buildings.

I see the value in the project overall. But I have to ask myself: would we be willing to put that burden on 348 households if they were each single-family homes?

I'm unsure how to feel about the 348 households who are expected to update all of their documents to reflect the new name. With 12 to 18 months to do so, maybe the assumption is that there is enough turnover that not many will have to actually change. I have no idea about the typical length of tenancy in those buildings.

I see the value in the project overall. But I have to ask myself: would we be willing to put that burden on 348 households if they were each single-family homes?

It's a valid question, but I personally wouldn't give it much weight. Years ago when all rural route mail delivery was switched to street addresses for the 911 system implementation, it certainly was ridiculously cumbersome for hundreds of thousands of Mn residents, but it certainly is doable and the mail continued to be delivered for an extended period of time with either the old address or the new address. I don't think a onetime address switch for 348 households is very significant in the big picture of a more logical street grid.

Couldn't it be both numbered and named (but officially one or the other)? I'm thinking of Kings Highway/Dupont Avenue/46th Street area as an example. The Hennepin County site lists all of those addresses as Dupont Ave, but I'm betting the residents use Kings Highway.

But I suppose if it's "officially" International Blvd, then things like IDs/driver licenses would need to change?

Would it put the Mall of America at the intersection of American and International?

Couldn't it be both numbered and named (but officially one or the other)? I'm thinking of Kings Highway/Dupont Avenue/46th Street area as an example. The Hennepin County site lists all of those addresses as Dupont Ave, but I'm betting the residents use Kings Highway.

But I suppose if it's "officially" International Blvd, then things like IDs/driver licenses would need to change?

Yes, it certainly could be just honorary. I looked up a couple Kings Hwy addresses, and curiously, USPS had no problem validating the address for both 3601 Dupont Ave S and 3601 Kings Hwy. (Yet 3553, across 36th, doesn't work as Kings Hwy.) So clearly they do have the addresses between 36th and 46th recorded as both. Not sure why, but USPS seems to have told Richfield this isn't an option.

Anyway, I assume there's no desire for it to be honorary, because of the perceived confusion of 77th versus 76th. I think city leaders really want to emulate the way Bloomington stitched together American Blvd.
Post Reply
212 posts