This seems like the new thing along the 494 strip, and it makes sense. BMW started it 15+ years ago, Honda rebuilt last year, the new multilevel Audi (of Richfield!!) dealership is well underway, and now this. What dealerships are next? The Lincoln behind REI or Subaru across Lyndale?

Replacement of the Chevrolet dealership somewhere not adjacent to a METRO line?

Is there a place for a more urban model of car dealership? It would probably need to operate as a satellite to an existing, larger suburban location, but could provide a limited selection of models for viewing, and also provide dealer services (repairs, recalls, etc.).

I don't know. The dealership wants you to buy one of their cars from dealer stock the day you come in. If you order one, you might decide all the expensive, high profit add-ons aren't worth it and order a bare-bones base model. If they send you to their Burnsville dealership to look at cars they have in stock there you're driving by their competition and you might stop in to check them out.

Arguably the Richfield Honda and Audi dealerships are the more urban model -- and that Walser site, even more so. Neither Audi nor Honda had/will have ramps on day one, but Audi at least is required to build one within five years, or face financial penalties. (They say they're reluctant to build them at the same time, because of incurring all the cost at once, and because they don't know exactly how much ramp space they'll need.)

But they're pretty compact. Richfield Honda and Mistubishi occupy about 3 acres apiece. Richfield Audi will be about 3.75 acres. The old Borton Volvo site on 54th and Lyndale was 2.7 acres (across two blocks) -- and certainly a building of much less consequence, housing many fewer cars.

In terms of downtown-urban form, I don't know of any examples in Minnesota. (The former Jaguar dealership at Hennepin and Washington was certainly a downtown location, but the form was very suburban.) But there's an example that might be what you want on Van Ness Ave in San Fransico: https://www.google.com/maps/@37.7838345 ... 56!6m1!1e1

The Walser looks great, although I agree with mattaudio -- I'd love to see the Subaru dealership at Lyndale do something like this. Would fit in nicely with the verticality of the REI and RB Honda.

Related: anybody know what's up with the vacant parcel at Lyndale and American (adjoining REI parking lot). 1.85 acres seems like it could be something. Looks like there used to be smaller commercial there, presumably bought out to "improve" 79th/American and Lyndale. Owned by the city now.

Related: anybody know what's up with the vacant parcel at Lyndale and American (adjoining REI parking lot). 1.85 acres seems like it could be something. Looks like there used to be smaller commercial there, presumably bought out to "improve" 79th/American and Lyndale. Owned by the city now.

It was being marketed for a "medical office" many years ago - with no nibbles. The city doesn't have very grand visions for this intersection...

Latest is they were going to issue a RFQ for an office development late last year. A few years back they had their "String of Pearls"; intersections that they were concentrating on redoing, and this wasn't one of them.

Yeah if anything this classic Bloomingtonized intersection is degrading over time. The bulldozing of anything resembling human-scale frontage on American Blvd due to the Toro expansion is the latest nail in the coffin for this corner.

It'll be interesting to see what happens at Old Cedar Ave and Old Shakopee Rd with the new bicycle trail and the city wanting left turn lanes. When they wanted right turn lanes at France and Old Shakopee is when three out of the four corners got leveled and redeveloped.

Council Member "People say 'There's those abandoned gas stations' and 'we need turn lanes'. We could say 'OK, we're going to take out the gas stations and put in turn lanes, but we're looking for something more than that'".

Regarding the Bloomingtonization of these old four-lane-death-road corridors that happened in the 90s-00s... I wonder if they had waited another decade, if we would have decided to do standard three lane road diet profiles on many of them instead. These Bloomingtonized stroads seem far overcapacity for actual usage.

Now, since we've already bulldozed so much of the adjacent land use to supersize these stroads, I wonder if there's a chance to convert these mega intersections to multi-lane roundabouts. There's already space due to the pork chops.

The gas stations were vacant and for sale for several years before the city finally bought them. As far as 3-lane sections, the're considering it for Portland Ave when it gets rebuilt, but Old Shakopee Rd anywhere west of Portland has too much traffic.

Yeah if anything this classic Bloomingtonized intersection is degrading over time. The bulldozing of anything resembling human-scale frontage on American Blvd due to the Toro expansion is the latest nail in the coffin for this corner.

I guess Goodwill/Seasonal Concepts is sorta human scale, but it's not a particularly attractive building, and although the entrance faces the street, the actual access is not intuitive.

I think four lanes + turn lanes are unambiguously needed on Lyndale through the interchange. But yeah, the divided 6-lane setup between American and 82nd is ridiculous. As are most sections of American Blvd.

As to old gas stations: isn't pollution a major issue from the old tanks, and gas spilling over the years? Although I like examples like Wiseacre, Bratt's Tree Company, etc, I have to think that properly remediating and cleaning up the site, plus renovating the building, must have nearly the expense of scraping the site and starting fresh.

The best example in this area of that kind of cool reuse is probably the Ember's/Andale site, with the addition and old Ember's used as the restaurant. Not a gas station, of course, but it has a similar mid-century "roadside" aesthetic.

Harriet's Inn built out the corner and kept the old gas station as retail fronting 40th. It must have been cheaper than tearing it down and building new because they were already building something, they could have just expanded it, right?

I'm being super lazy and not searching for a proper answer, but I seem to remember some discussion around here that keeping the old SA building allowed them to categorize the project as a renovation instead of a new build, making approvals(?) easier.
The problem with being an introvert online is that no one knows you're just hanging out and listening.

I don't think so. I honestly think it was just a choice they made for financial (or other) reasons. The building "expansion" still needed full site plan review and a public hearing (which was contentious for reasons related to alcohol sales, late night hours, etc.) It's zoned C1...so the use and structure were pretty much allowed by right (with perhaps a few minor dimensional/setback variances). At the end of the day, I'm guessing it was just cheaper to not demolish the existing structure. The underground gas tanks were presumably long gone & pollution remedied (gas station owners are required by law to do so within a certain time frame after they close, AFAIK)

Luna Di Luna is a new restaurant that's been a hit with area residents. It's a traditional Italian sit-down place in the former Taco Bell / Pawn Shop / Smoke Shop on Lyndale. 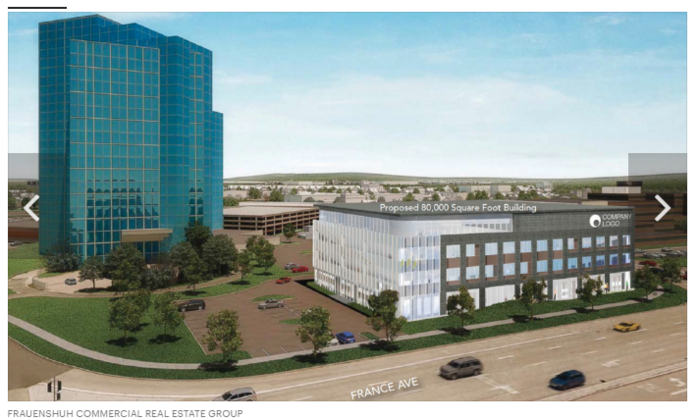 Gist:
Frauenshuh Commercial Real Estate Group has proposed developing an 80,000-square-foot to 140,000-square-foot office or medical office building on a 4-acre site at the intersection of Interstate 494 and France Avenue in Bloomington.

The developer won't start construction until it signs a major tenant and receives city approvals, which means the soonest the building would open is 2018.

Will the Southdale county courts move to Bloomington?

I thought this was a done deal, but folks are still negotiating this thing. Is there another better place to build this we can come up with? Why isn't this a done deal already since the government services center is already underway in Southdale Center?

I appreciate that, according to the article:

1. One of the primary reasons why we need this courthouse is to prevent alleged criminals from having to pay to park downtown. (Minneapolis residents seem to cope.)

3. With not enough parking, there could be security issues.

It's positively Bloomingtonized. I wish it were staying at Southdale in a reconfigured Library site.
Post Reply
272 posts