"Several challengers, including Anderson, had argued that the city is growing too fast and that the council wasn’t listening to residents’ views on proposed projects."

This is kind of a ridiculous claim. Based on resident opposition, around a thousand new homes have been denied in the last five or so years -- to my knowledge, that's more than Minneapolis, at 8x the size of Edina. In the Southdale area, high density development has been expressly limited to bordering other high-density housing, and bordering Richfield, with no projects I'm aware of approved that are remotely adjacent to Edina single-family homes. (Unless 7200/7250 has received final approvals?)

I wish there were a clear, strong, pro-development narrative here. These are beautiful, high-quality new buildings, bringing more young people into Edina and into this part of the region. They provide housing choice for all residents, and most contribute a great deal to the tax base with (in most cases) zero subsidy from the city.

This is what almost every other city in the region wants. Stop looking a gift horse in the mouth.

Proposed rezoning for the office buildings at 7505 Metro Blvd for residential. Hempel is proposing bringing up to 606 units to this site, with three new buildings and redevelopment of the existing identical office buildings.

Whoa. With zero single family Edina houses within line of sight to object.

Is one of these buildings one that formerly held the DQ HQ?

It appears that Hempel already owns the 7401 Metro office building and DQ owns 7505 Metro. (DQ HQ is moving to Normandale Lake across 494).

So they are proposing to convert both office buildings to residential and infill with 3 new buildings? Building D (new) and existing 7505 (DQ) are "proposed", while 7401 and the other 2 new buildings are "future". I wonder if that's the phasing plan, or if I'm taking their description too literally.

Also, I didn't know Hempel Cos did residential development. This is encouraging if they are expanding their reach beyond renovation and new construction commercial.

As for opposition, yeah there is literally no residential around here, except on the other side of 100. After all of this residential is built as planned, I'd guess the overall traffic generation will still be lower than the office buildings would generate (assuming fully occupied). It's hard to get it across to people how low traffic generation from apartments is compared to office/retail/restaurant. Not only is it lower, but also more spread out through the day. I'd guess the peak hour trips generated drops significantly compared to office.

P.S. (Petty Shit): Wacky/embarrassing to me that Edina uploads scanned pieces of paper to their website. City staff almost certainly have electronic copies from the developer...why would someone be scanning a piece of paper?!

Off-topic transit rant: It's increasingly a damn shame that Highway 100 wasn't planned with online BRT stations when recently reconstructed through St. Louis Park. Retrofitted bridges would still be needed in Edina/Bloomington (50th, 66th/70th, 77th, American), but the entire section from Minnetonka Blvd to south of Excelsior Blvd was just rebuilt at considerable cost, replacing every single bridge. At a bare minimum, we could have planned a freeway BRT line from Normandale Lakes (84th) to 36th (Wooddale SWLRT Station) for relatively few dollars as part of that project.

I totally agree about the scanned pieces of paper thing. I’ve complained about it here.

As for BRT, great idea, but the upgrades to 100 were completed shortly after the first BRT in Mpls or St. Paul was completed. So the chance of anyone thinking about it out in the suburbs was probably minimal.

It’s a hop, skip, and a jump to Wooden Hill Brewing and Taco Libre. Less than half a mile in each case.

I’ve had a fantasy that an imagined TH 100 hBRT not connect to downtown Minneapolis but use the Wooddale Station for downtown connections, instead run the hBRT all the way up 100 to Crystal, Robbinsdale, Brooklyn Center, then to the Fridley commuter rail station area.

Brilliant! Enough with the spoke-and-hub transit. We need a network, too. This is a nice start.

A major problem identified by city staff is the lack of infrastructure, namely water & sewage. The area was zoned office, which has low demands on infrastructure (except roads, of course).

A residential development this large would impact nearby residential neighborhoods using the same pipes, backing up sewage.

The company’s website claims they help with costs of infrastructure in their redevelopment projects. How do Met Council & cities deal with a need for retrofitting bigger pipes in existing areas? Who ends up paying? How long does it take? Is it discouraged?

Also, the area just west of this development is zoned industrial. Even if the existing uses won’t affect housing here, will housing here limit future industrial uses, which generally contributes a lot to city taxes?

Lots of questions. No easy answers.

How do Met Council & cities deal with a need for retrofitting bigger pipes in existing areas? Who ends up paying? How long does it take? Is it discouraged?

Plus 1. Are there any guidlines or precedents for the Met Council/Cities dealing with this?

Business Journal article about the plan:

Gist:
The first phase of the project would renovate the Dairy Queen headquarters building at 7505 Metro Blvd. into 136 affordable units. Dairy Queen is moving its headquarters to Bloomington early next year.

The Minnetonka-based developer would also construct a 150-unit market-rate building while working on the renovation.

Future phases could include the remodeling of an existing office building into 135 market-rate units as well as the construction of two more buildings. The total number of units included in future phases is planned to be 320. 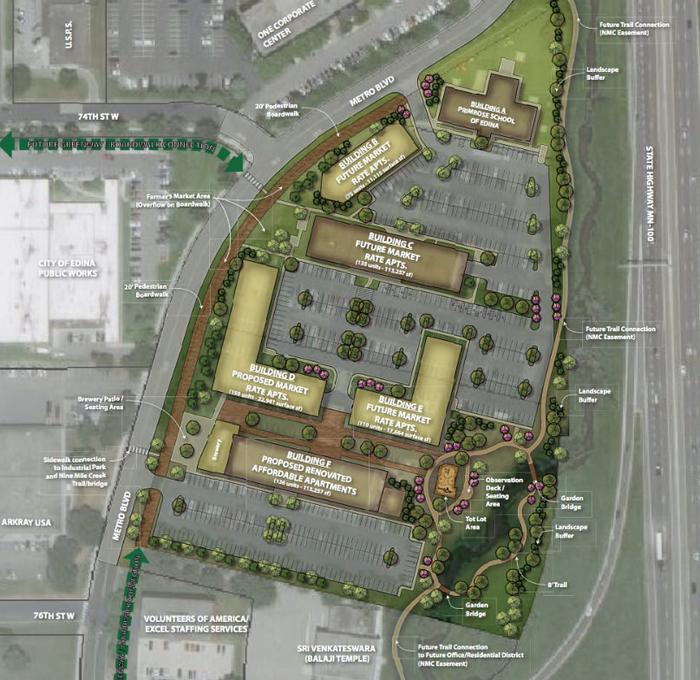 Maybe someday, but not today. A unanimous ‘no’. Off to city council.

Edit: I work just west of here and if I am late leaving the office it's almost eerie just how desolate everything is. The brewery is always hopping, but everything else is completely vacant. Even Subway/Caribou/Starbucks/Cheetah Pizza are virtually empty. Adding residential seems like it would be a great way to extend the habitable hours of this corner of Edina.
The problem with being an introvert online is that no one knows you're just hanging out and listening.

Taco Loco or whatever is always busy when I go there.

There was a lot of interest in the project, and a few accolades, but the consensus was it was premature, as the city had not considered residential there, and it will now be studied. It would also be a lonely island of residential without a more… comprehensive plan.

Former dry cleaning business near Cahill and W 70th proposed for 62 affordable apartment units. East Edina Housing Foundation bought the property and is working with MWF to develop it.

If I’m placing the building correctly the back of this would have the Nine Mile Creek Trail. Direct access would be nice.

Looks like this is across the street from Nine Mile Creek. I don't know the area very well, but it doesn't look like there are any nearby access points.

The south side of 70th Street doesn't have a sidewalk to access the trail from the west, which is dumb considering the beaten down path there is along the road which I've used a few times.

I'll also throw in the fact there is a potential commuter rail line right next to it (hint hint nudge nudge).

Anti-growth quasi-PAC has formed to oppose the Edina comp plan and lobby to "kick the bums out" in the next election cycle:

They don't name their organizers, and the address the provide is in Eden Prairie. (Seemingly office of the communication consultant.)

Nicely laid out case, although naturally certain things are flatly wrong or misleading. In particular, their claim that growing 33% in 20 years would be "unprecedented". Obviously Edina has a significant history of post-war growth well exceeding that rate. In fact, every decade from 1900 to 1980 saw that rate of growth or much, much higher.

I guess I'm honestly curious what the angle is here. Most of Edina's growth has been at Southdale, where single-family neighbors have basically been handed a universal veto stamp to developments even slightly close to them. Only just now, after two fully rejected versions and a third, majorly revised version, did the City finally approve a 7200 France combination of town-homes and a mid-rise apartment over 400 feet from any single-family houses.

The angle also doesn't feel too likely tilted toward schools, when most of the Southdale area development has been in the Richfield school district. (And, as pointed out on Twitter, the Edina school district is actually hurting for elementary age kids anyway)