The proposed waterpark would be 225,000 square feet, one of the largest indoor waterparks the world, according to a Bloomington Port Authority memo. The site is bordered by 24th Avenue South, East Old Shakopee Road, East 82nd Street and 26th Avenue South. It's now a surface parking lot owned by Triple Five.

The waterpark would be open to the public, different from the Great Wolf Lodge project and its 75,000-square-foot water park nearby, which is limited to those booking rooms. City documents said it could be branded by an international name like Dreamworks or Nickelodeon. The city is also exploring a waterpark discount for Bloomington residents.

The city would lease land from Triple Five under the arrangement. Triple Five would then operate and manage the water park.
You do not have the required permissions to view the files attached to this post.

Something something build the LRT station/transit center into this building instead.
Joey Senkyr
joey.senkyr@outlook.com

I think this is a pretty cool idea and gets the mall towards something it was always envisioned to have anyways. The article didn't seem to say, but would this be connected to the mall by some sort of skyway? Or not feasible?

I imagine they'd reconfigure the East parking ramp to extend the skyway from the 4th floor through to the water park. I don't know how possible that actually is, though.

I was wondering about how this might connect as well - as it would have to be connected... another thought I had, besides a skyway connection through the parking ramp, would be to tunnel under 24th Ave S and connect into the climate controlled transit station pathway that will be built and have direct access into the mall. Seems to be a lot less work. But who knows, Triple 5 might have more grandiose ideas about connecting the two other than using the transit hallway.

I don't understand why this is being proposed as a public-private project. Why would the city want to own a waterpark? Why is that the city's job?

If they're going to claim they need to exploit lower municipal interest rates to even make the project profitable, that should be a big red flag for the city.

I don't understand why this is being proposed as a public-private project. Why would the city want to own a waterpark? Why is that the city's job?

If they're going to claim they need to exploit lower municipal interest rates to even make the project profitable, that should be a big red flag for the city.

There are plenty of cities that own community pools/water parks. Maple Grove has a nice one within their community center. Assuming a revenue sharing agreement I would imagine Bloomington would make a nice chunk of money off of this considering how many people see the MOA as a vacation destination.

Sure, but there's a difference between a community pool with a few waterslides and play areas that's being provided as a public good, versus a $200M for-profit development. Especially when the latter is proposed by the owners of, and designed to enrich, another private-sector development.

I'm not entirely set against the idea, but I do think this should probably get about the same level of scrutiny as, say, a new sports stadium.

Well, the city almost certainly doesn't want to own it.

But on the other hand, they probably do want it to exist -- because it will drive up hotel occupancy rates and corresponding city lodging taxes, etc. Also, the city of Bloomington is already very much on the hook with the MOA, so their interest in its long term success is far from an academic matter.

According to the article Triple Five is suggesting the city could earn up to $1 million annually in interest payments.

Locked article with rendering from business journals. Also interesting that it sounds like triple five is still earnestly planning to build phase II eventually. I thought it was dead.
You do not have the required permissions to view the files attached to this post.

Something something build the LRT station/transit center into this building instead.

A million times yes! The remodel of the current station doesn't solve the slow crawl for trains going in/out of the ramp.

I see a skyway in that rendering!

Yes! As someone who lives in South Minneapolis with two young girls, they would love going here and it would be very close! Hopefully it is done by the time they are too cool to go here

I see alot of similarities from the MN Expo 2023 site plan to the watepark plan: 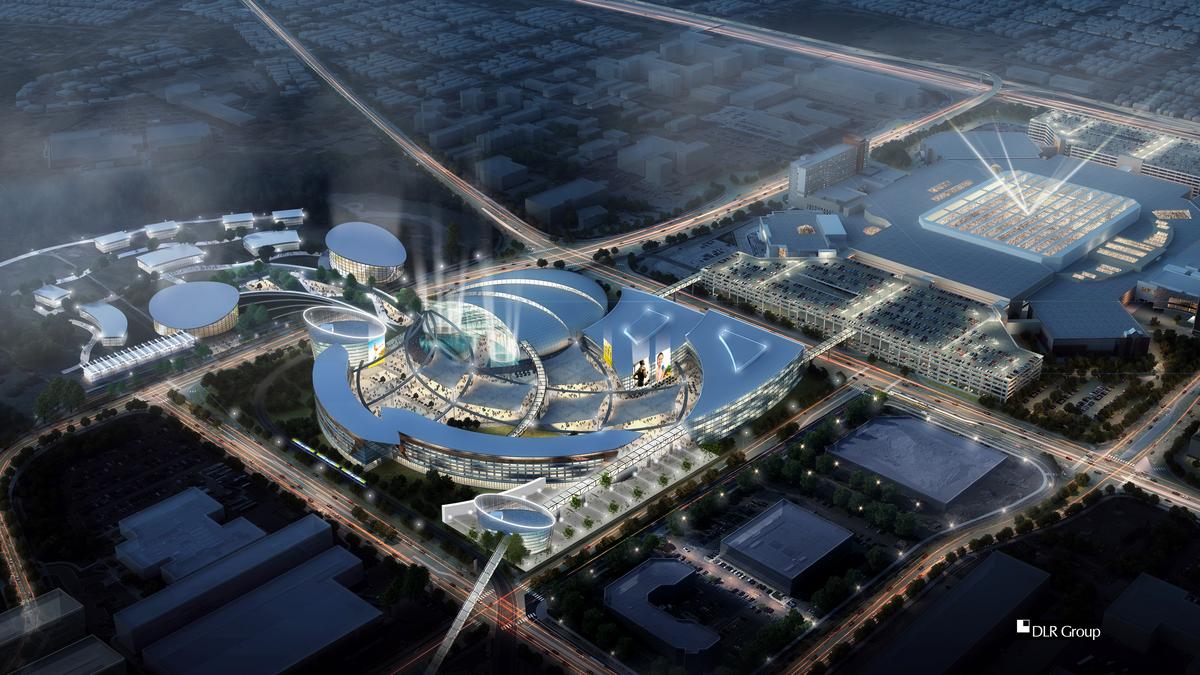 Is this the DLR Group's design philosophy?

Interesting that no connections are envisioned across the light rail tracks. Really disconnects from anything to be built at the Kelley Farm or other nearby parcels.

I like the idea of building the light rail station into this building. They could definitely connected to the mall America by the skyway. In my opinion, I think the skyway should have moving sidewalks. That way people can quickly get from the transit center/waterpark to the mall.

Do we think that's a big convention center that's proposed next to the parking ramp?

Because if there's one thing MSP needs, it's another convention center.

Something something build the LRT station/transit center into this building instead.

They're even showing not one, but two skyway connections over 24th Ave to the Mall! Ugh, it is so frustrating that we're still stuck on renovating the current MOA station and not doing anything about that time-wasting curve of tracks around this block. The train would arrive at the station about 3 minutes sooner if it was on the east side of 24th Ave at 82nd Street (though yes, it would slightly lengthen the walk time for riders)

That said, I think it would take legislative action at this point to stop the current plan (which was actually supposed to be complete by now)
Post Reply
25 posts