Thanks, timdski! Good news both are going forward with this development.

I sympathize with the difficulty of training people how to use the scanning function on a copier, but at the same time I hope that Eagan officials aren't making decisions with these particular iterations of those documents.
"Who rescued whom!"

It will be interesting to see what else is built in this area, as there is still nearby land that can be built on, and some existing buildings nearby that could possibly be redeveloped as well.

I can see the hotel doing well here. I'm still skeptical about the apartment building, but would be happy to be wrong about it.

You're right, QuietBlue, about the other land in the area.

Here's a link to the site development plan: http://property.cassidyturley.com/prope ... 202014.pdf

Some more details from the real estate firm running pitching this: http://property.cassidyturley.com/prope ... 8%2014.pdf

It's also worth noting that the Cedar Grove Transit Station will likely be upgraded: https://forum.streets.mn/viewtopic.php?f=18&t=93&start=240

It sounds like the mall is almost completely leased out, which is a good sign, and they've even had to turn stores away: http://www.bizjournals.com/twincities/n ... tores.html

Also, this layout is very similar to the greater Pittsburgh outlet in Washington, PA. It is much more shopper-friendly. Especially with the canopies to cover the sidewalks during inclement weather.

Pioneer Press has a story today "Going to Eagan outlet mall? You might want to leave your car at home"

Wow!!! What a huge difference! Hopefully they will just tell people they need to use transit on busy days.

The best time to go to an outlet mall is Sunday morning or in the evening during the week after 8 PM or so. Know what you are looking for so you are in and out.

The underutilized Red Line has a stop right there on Nichols. I'm not sure if there's an actual sidewalk though.
Q. What, what? A. In da butt.

Kinda sorta. I had gone out there in late April just because I was bored. I took some photos with my phone, but they're really blurry. There's a short sidewalk on the west side of Nichols. 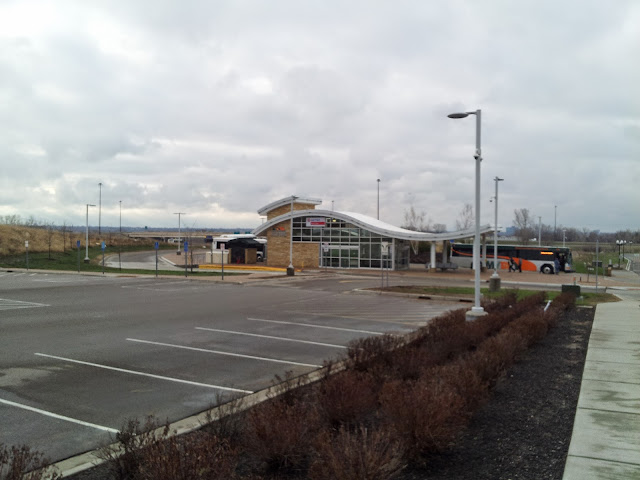 Most of the curb cuts don't really line up with anything on the other side of the road, though one matches a new bike/ped path on the south side of Cedar Grove Parkway. I thought I had taken a better picture of the path, but there's some proof of its existence in the bottom right of this shot: 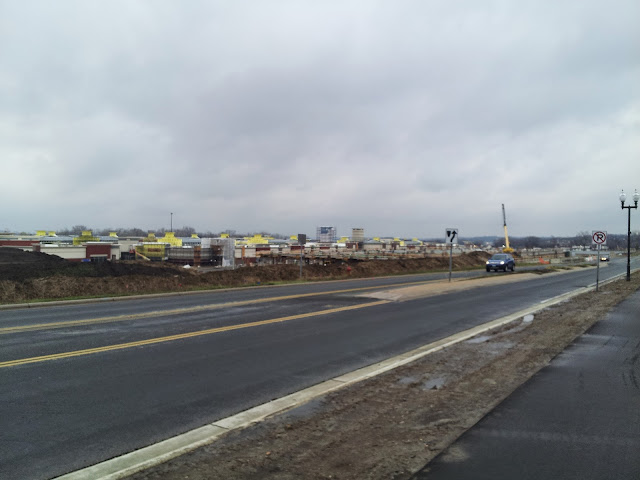 There appear to be sidewalks on both sides of the street that divides the shopping area from the parking complex (Google Maps calls this Eagan Outlets Parkway): 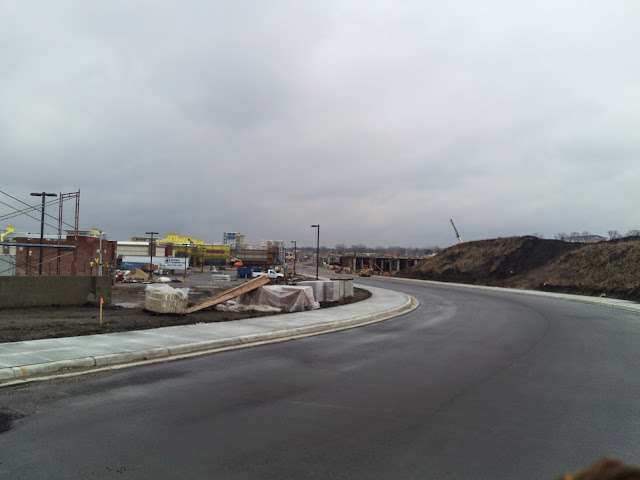 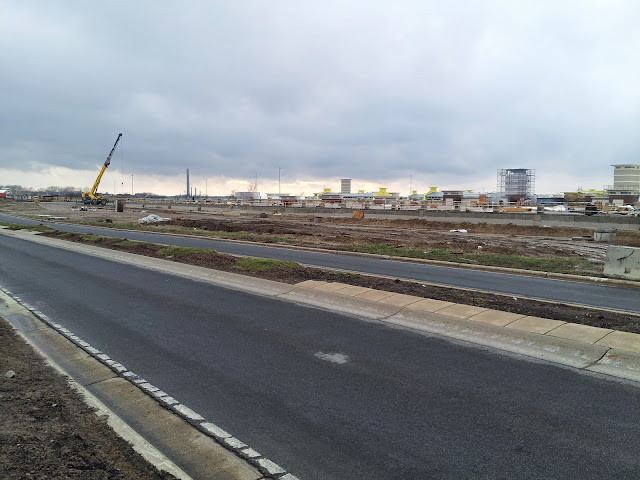 I heard a report on the radio this morning about this project and how the City of Eagan has initiated some complex plan to handle the "parking deficit" for the opening weekend. They sounded like they were planning for bringing the Summer Olympics to Eagan or something. First, it's sad that a city would waste resources to bother with the shortage of a private good, car storage at a private mall. Second, it's sad that the building management doesn't do what is obvious when there's a shortage of a private good, raise the price of car storage (if only for a weekend).

Agree completely. I suppose the city is so willing to help this project out as they used eminent domain to assemble all the land, and had no interested parties for a long time.

I heard the same thing on the radio this morning. Sending employees in by bus to help with parking - sounds like they should have thought out the parking situation a little better in the conceptual phase. Genius.

I believe the city's concern is less about convenience for the mall's owners and more about the impact on the surrounding area -- they don't want mall employees and shoppers parking in other businesses' parking lots, nearby residential streets, the apartment building parking lots, etc. That said, I agree that parking shouldn't normally be an issue outside of the opening weekend and maybe Black Friday, and that it's a bit late in the game to start thinking about this.

It's just a fifteen minute walk for me, so I doubt I'll ever drive there myself.

Thought it would be timely to return to this, since it is opening tomorrow. I took a walk down there last night (without my phone, so I couldn't take any pictures) and went right up to the mall itself and the parking ramp. They are still doing a lot of finishing touches on it -- some of the signage is up, but not all, and there's some areas that haven't been landscaped yet. Plus the parking structure itself didn't appear to be operational, though it looks like it is close.

Since all of the stores face inward, the outer wall of the mall feels very blank and barren. There is some signage and window displays, but I was surprised they didn't do more to make it visually appealing.

The new city/neighborhood park nearby (just south of the parking structure) appears to be mostly ready, though the ground is still bare dirt and there was a fence around the playground. Progress is being made on the apartment building just east of the mall as well.

And of course, there are signs all over the Cedar Grove transit station parking lot stating that mall parking is not allowed. I know MVTA is also temporarily (tomorrow through Sunday) not having the 444 and 475 buses use the established stops on Nicols and Diffley and are only having those buses stop at the transit station.

I'll check the mall out once it's open, though probably not until later this weekend.

Sounds like this place was packed for the grand opening yesterday. The Kare 11 story about it claimed that (paraphrasing) "it will pump hundreds of millions of dollars" in the Minnesota economy. Hyperbole much?

Maybe it's hyperbole, but then again, maybe not. It was certainly packed all weekend, and while it obviously won't stay that busy, I think it's positioned to do very well.

I stopped in on Friday night, and while I said earlier that I didn't find the outside of the mall that inviting, that all changed once I got inside. The layout makes a lot more sense than the sprawls of Albertville and Medford -- they were able to fit a lot of stores into the space they had to work with. The racetrack layout was a good choice, and there are passages and open areas that cut across as well to provide easy access from one side to another. Even though it was busy, it didn't feel cramped or claustrophobic. There are also plenty of sitting areas and a small food court with indoor and outdoor seating, which sets it apart from the other outlet malls in the area (plus there are the existing restaurants nearby also). There are lots of planters with flowers in the mall too to provide some color.

They also managed to wrap up the work on the parking ramp in short order, so it was operational for this weekend.

I went yesterday and was pleasantly surprised as well. I'm not going to lie, I HATE Albertville. We went at 10:30 or so right after it opened and the traffic wasn't too bad, but when we left at 1 it was pretty awful.

Lot's of great stores you don't find anywhere else (as outlet versions at least) and there were tons of good deals for the grand opening weekend. Not sure how long any of them are going to last, but if you can get your hands on a Banana Republic friends and family, that's an additional 40% off. According to my receipt I saved over $400 between their sales and my friends and family discount. I was happy

Well to be fair if you aren't saving at least 25% off their MSRP you are getting hosed. There is a reason they have sales 88% of the year.
Post Reply
81 posts