Again, this is a case where an at-grade rail crossing would make SO MUCH MORE SENSE.

BNSF wouldn't allow it, and I don't blame them. Too many possible pedestrians and bikers that will try to beat the train, and these trains go up to 50 miles per hour on that segment. This rail line was built for speed and that includes the limited at-grade crossings; in St. Louis Park the closest at-grade crossings are West Island Avenue on Nicollet Island and Crosby Road all the way in Wayzata.

If the train is going 50 mph, there’s little reason to try to beat it, as it will pass quickly (as opposed to a very slow-moving train).

An at-grade crossing would cost way less, would require much less effort on the part of cyclists & pedestrians, and would be way faster 95% of the time.

Also just because freight trains can operate 50 miles per hour on this line doesn't mean they always do. Sometimes they operate slower, or they're even stopped because they have to wait for clearance to get into Northtown Yard.

It's also easier for criminals to hide in underpasses as opposed to overpasses. Besides flooding and the fact that the interchange is eventually going away this was a mentioned as s factor in not building a tunnel for the I-35W path under the Black Dog Road ramps. 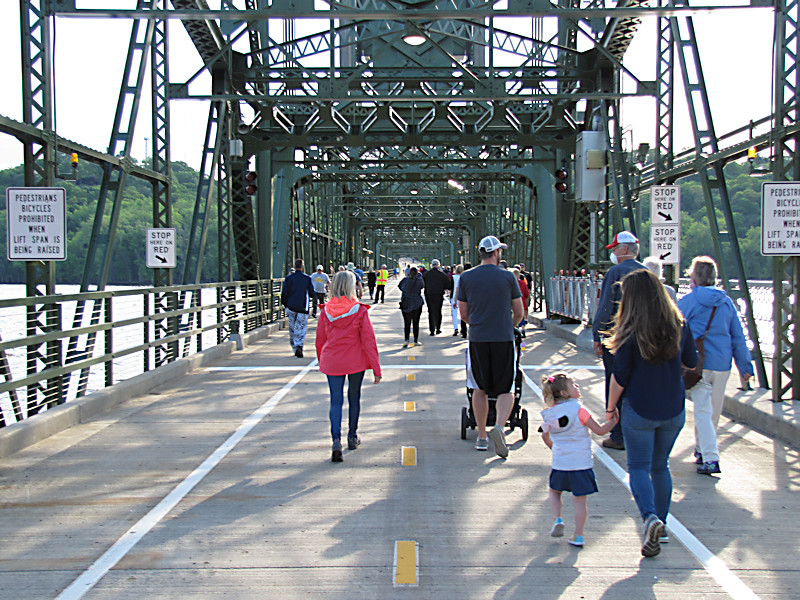 There's a ton of bike projects seeking money in the Metropolitan Council's Regional Solicitation. Will be interesting to see what actually gets funded.

Among them are: There's a ton of other walk/bike projects that are seeking funding, but I put what I thought are most impactful here.

If I had to pick five, they would be

1) Raising the I-35W trail up so it doesn't flood as much. Right now it doesn't go anyplace in particular besides the I-35W to Cedar Ave section of the Minnesota River Greenway, but soon it will connect with the crossing on the new Minnesota River Bridge. Along with 2) a new trail along Nicollet you'll be able to ride from Bloomington to Heart of the City on fully protected infrastructure.

3) I don't know much about the Capital City Bikeway but being in downtown I'm assuming it will be rather impactful.

4) The Normadale trails, have to pick this one because I live in Bloomington.

5) The Shakopee pedestrian bridge, since there's no crossing anywhere close.

Regarding the Normandale Blvd "trail", finally! I've been biking on that buckling and muddy stretch of junk for more than a decade. This has been long overdue. Now they just need to do the "trail" along Old Shakopee.

Is the "MN River Greenway/UP Rail overpass" site at Nicols Road? I can't think of any other place in that area where a trail crosses the Union Pacific.

The UP Rail overpass is near Lone Oak Rd. This fills the gap in the MN River trail between Lone Oak Rd and Nicols Rd. 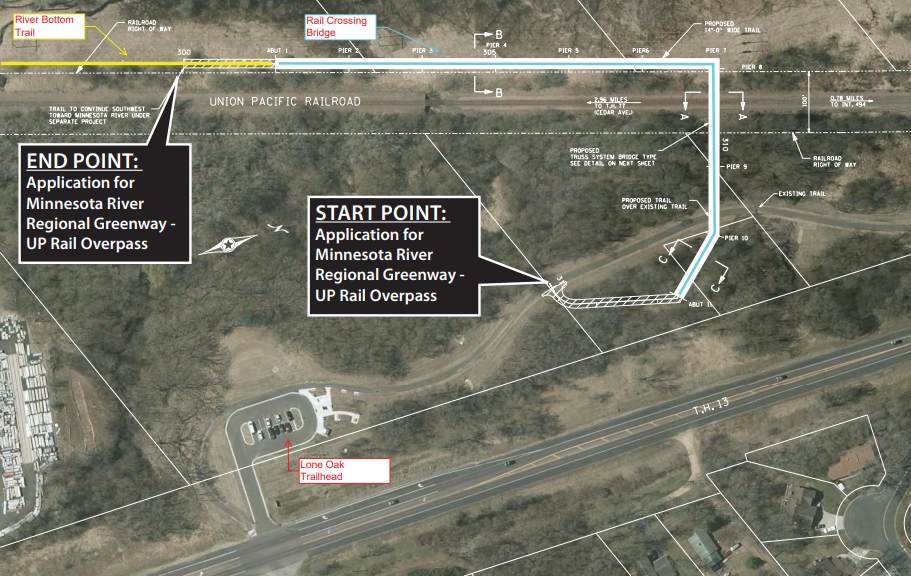 From here the trail will more or less hug the high ground on the northwest side of the railroad until near the sewage lagoons, where it will take off straight west over some sort of a boardwalk / bridge type thing straight to Sorenson landing.

Again one wonders where an at grade-crossing would make more sense, but no railroad will ever allow a new at-grade crossing ever again, no no no. So unless we pass a law forcing them to or releasing them from any liability if someone gets hurt at the crossing, that's the reality we have to deal with.

There was an option to have the trail on the east side of the railroad and using the existing Nicols road crossing. Would have been a lot less scenic, probably cheaper and with better connections to the neighborhood.

Building a mulit-use trial from Sorenson Landing down Nicols road to a new overpass over Highway 13 at or somewhere in between Silver Bell and Cedar to connect the Greenway and the Nokomis-Mississippi River trail to the Cedarvale area and the rest of the Eagan network is the next thing we need to think about. My understanding is they don't want to build an overpass at Nicollet due to uncertainty about the future configuration of the intersection or interchange, but there's been a study and it's been determined that Silver Bell and 13 will operate acceptably as a signalized intersection indefinitely.

That Dunwoody bikeway would be a huge improvement for a section of the city that feels really uninviting for pedestrians/bicyclists, but has a lot of potential with the few small shops and the Basilica.

Yeah, that would be huge - I bike along that section of Dunwoody fairly frequently with the Cedar Lake Trail and Glenwood Ave both closed for SWLRT construction, and it's absolutely terrifying - drivers are pretty sure they're still on 394 and should still be able to go 60mph.

Too bad that, even if funded, it wouldn't happen until 2024, when the Cedar Lake Trail will be reopen anyway, but it's still worthwhile even then.
Joey Senkyr
joey.senkyr@outlook.com

I agree with the Dunwoody trail. I've biked through there for years and the cars coming off of 394 are terrifying. The alternative to biking on the sidewalk on the other side of the street also isn't pleasant. It's a huge gap given the bike lanes and etc on Glenwood and the Van White Bridge are bike friendly on one end and the Cedar Lake Trail and Sculpture Garden on the other end. In between it scary.

I will also say that the Bassett Creek trail gap thing is not needed. They should just do bike lanes or protected bike lanes. There are also already trails, albeit aged along here. I feel like Golden Valley is trying to be Minneapolis and create some really cool regional trail when they aren't Minneapolis and no one wants to take a trail that winds around suburban areas. I've tried biking this trail from near Medicine Lake/French Park and lost it because it meandered so much.

I looked for a relevant Hennepin Ave construction thread, there are like 3 of them but none specifically fit the Dunwoody-Lyndale Hennepin-intersections of hell. But since the Dunwoody Trail is already talked about here, might as well continue.

I’m looking at the diagram of the Dunwoody trail as proposed and this is just weird. And I can’t help but think the eastbound could be smarter because this is just going to make so many causal cyclists to go against the flow on the north side.
AF3FCA6B-25B6-404B-8163-788171B89B17.jpeg
You do not have the required permissions to view the files attached to this post.

I'm not sure I'd rank the Duluth Street trail as high on the list relative to some of the others, but that doesn't mean that in the long term we should settle for lousy painted lanes when there's people that want a true off-road protected path. The 4-3 conversions in Bloomington are beneficial from a safety standpoint for both motorized and non-motorized traffic, but no one's pretending the lanes are for anyone but the brave and fearless. My observations around Bloomington is that probably 80% of the riders use continue to use the sidewalks even if there's a painted lane available. I don't think they'd feel any safer if we added flimsy plastic sticks and called it "protected" either.

I looked for a relevant Hennepin Ave construction thread, there are like 3 of them but none specifically fit the Dunwoody-Lyndale Hennepin-intersections of hell. But since the Dunwoody Trail is already talked about here, might as well continue.

I’m looking at the diagram of the Dunwoody trail as proposed and this is just weird. And I can’t help but think the eastbound could be smarter because this is just going to make so many causal cyclists to go against the flow on the north side.
AF3FCA6B-25B6-404B-8163-788171B89B17.jpeg

They could EASILY turn Harmon into a two way street, and put slanted parking on the north side offsetting parking spaces they could easily remove from that Hennepin Ave frontage road. Leaving open the non-rush hour exit and putting in a cul-de-sac. That green space is kinda nice, but it's so oddly shaped. Doing this could connect the Basilica to the park in a connected greenspace.

I mean, I know engineers like perpendicular crossings for reasons. But this is a fantasy and nearly no cyclist will end up using it the way this is designed.

I mean, I know engineers like perpendicular crossings for reasons. But this is a fantasy and nearly no cyclist will end up using it the way this is designed.


I agree, I would honestly probably just cross Dunwoody and take the sidewalk on the south side which is what I do now. (One of the few times I routinely ride on the sidewalk, but the cars coming off of 394 heading toward the Lyndale intersection are crazy and the sidewalk rarely has anyone on it and if I remember correctly is wider than normal.)

Kinda wish they could extend the normandale blvd trail north to cross over 494 to connect to the nine mile trail somehow and maybe laying the groundwork for a good north/south route the somewhat mirrors the 6, but that might be kinda difficult since that would either mean digging a tunnel at 100 or hoping edina won't throw a fit if they try to improve the sidewalks on france.

The long term connection to the nine mile trail is going to be across on the existing 84th Street trail, then across the Bush Lake Road overpass and on a new trail threading through the industrial park, then meeting the nine mile trail where it turns north along the railroad tracks.

I'd rather they road diet 84th and put in some protected bike lanes. That "trail" isn't the greatest, the main issues being having to stop at every intersection to push the walk button and guessing if turning traffic will wait for you, and the westbound off-ramp from 494 has a pretty bad blindspot. I got clipped by a car there when a motorist rolled through on a red turning right.

Either put protected bike lanes on 84th, or do what Korh suggested. Or in a perfect world do both.

This is where if Bloomington had actually built the Nord Ave overpass that might be another way for a trail crossing.

Having the trail go directly north would still involve quite a bit of a detour on either side to get a reasonable length bridge due to the cloverleaf there. I'd rather see advocacy go for something like the proposed trail on the south side of Old Shakopee Road, which the city has this idea that is a low priority because they don't think many people would use it.

A road diet on 84th wouldn't be a bad idea and would at least provide painted lanes for the brave and fearless, but I don't see protected lanes or a trail without a complete reconstruction, especially since any kind of bicycle facility is not in the ATP.
Post Reply
1643 posts