Crashed into the other car, fled the scene of the crash, kids ejected from the car (were they even wearing seat belts?).

I'm more curious to know if there were drugs or alcohol involved. Once again, a majority of what happens in nerf wars is just finding someone at a park and getting them out. Or getting them while they're at a friends house or McDonalds. Should we ban the game, or should the game ban cars? When our high school did it, we banned cars (meaning no drive by shooting, or shooting while driving).

I'm still amazed at how many high schoolers come into my Target looking for Nerf Guns so they can participate in the Nerf Wars. Some coworkers even play, and openly admit to using their cars during the game. I'm not against the game itself, but the use of the car.

Strib actually has a relatively decent piece discussing pedestrian safety in the metro:http://www.startribune.com/in-crashes-t ... 380345481/

No discussion of how the built environment affects pedestrian safety (other than what is implied by stats showing higher fatality rates/pedestrian crash in the suburbs).

I was just thinking the other day about how much worse pedestrian safety seems to be in St. Paul than in Minneapolis, though I don't have data. Many streets in St. Paul are missing proper crosswalks in obvious places, and instead rely on a toothless claim that cars should stop for pedestrians trying to cross the streets without proper crosswalks. Cleveland and Fairview seem to be especially bad, but of course Snelling (!!!) has all sorts of places where pedestrians aren't given any ability to actually stop traffic and are instead provided with orange flags on either side. Sure, cars *should* stop, but I hate relying on a flag against a stream of heavy traffic that's probably moving too fast.

Semi-recent news out of Kalamazoo, Michigan. Driver swerves into a pack of nine cyclists, kills five, seriously injures four others. Absolutely horrendous. No indication if alcohol was a factor in this. They usually get that to press pretty quickly so I'm assuming it wasn't. Just more justification for proper bicycle infrastructure.

St. Paul has fewer stoplights for one and a seemingly ignorant county in charge of many of the roads.
Q. What, what? A. In da butt.

Also 100,000 fewer residents and [some large number] fewer jobs in about the same land area. Which means far fewer peds for drivers to pay attention for. Add all that to sean's reasons and it's a bad recipe.
The problem with being an introvert online is that no one knows you're just hanging out and listening.

And even still, St Paul's ped/bike fatality rates per capita (not sure about per mile walked/biked) are far lower than many major cities in the US. [insert comment here about comparing central city statistics because population and size vary] If you combined Minneapolis and St Paul to make the land area and population more comparable to other metros' central cities, this would still hold true. Just really baffling to think about how bad it must be other places.

So based on @mikesonn tweets it sounds like Ramsey County has a traffic engineer, Jim Toolas, who is stuck in the 1970s and is digging in his heels. Frustrating series of tweets.

Real nasty car-on-bike crash at first and Hennepin earlier. Cops had part of Hennepin closed, ambulance, mangled bike, photographing of evidence. Hopefully the cyclist isn't doing too badly. That area in front of the bridge is so hostile to non-motorized traffic.

Apparently it was the other way around, Bike on car. Biker in critical condition after running the red light and smacking into a car.

Nice to see Strib made the wise decision to not have comments on the article.

I realize man bites dog etc etc but why is this news when a car running a red light and hitting another car isn't news.

High speed chase this morning down Cretin Avenue ended on the SW corner of Jefferson. 100+ mph. 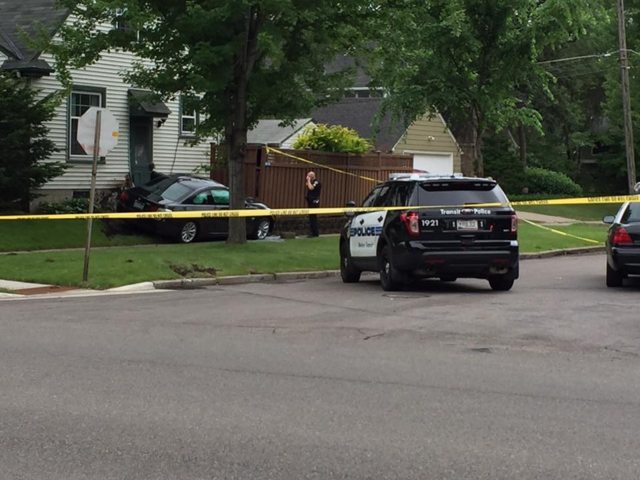 Why would Metro Transit police be involved?

Metro Transit police were involved because they were the ones chasing the car. They are cops and have the exact same authority as any Minneapolis or Saint Paul cops.

Also, scanner traffic reported this was about 12:30p and it never exceeded 55-60mph. Sounded like the driver wasn't quite sure whether they wanted to run or not since it only lasted about 1 minute at (relatively) slow speeds.

My neighbor brought it to my attention. Names of the innocent redacted. 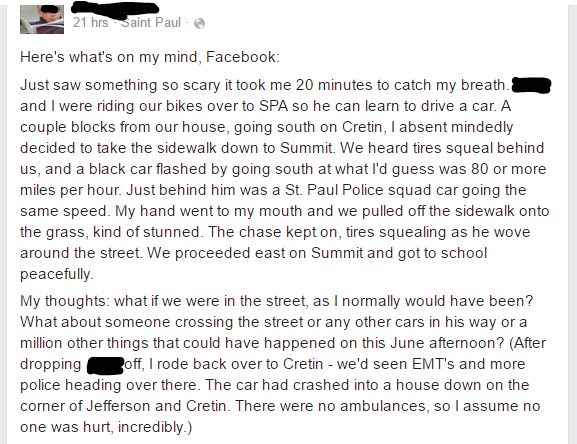 A road where you can do 80 (or 60 or 100 or whatever it was) without crashing into a street pole or building or parked car or curb or something within a half a second is in and of itself a road crime.
Peter Bajurny
peter@bajurny.us
@FISHMANPET