Love the idea. It reminds me of the Klyde Warren Park what was build over the freeway trench in downtown Dallas.

This idea is a bit more ambitious since it proposes the construction of buildings over the area, but it's certainly feasible. The problem is, this would need to have a master plan which would be carried out over more than a decade, causing nightmarish traffic issues for everyone who drives through the area on 35W.

Maybe is Saint Paul decides to cover up the downtown 94/35E interchange with a park it'll force the city of Minneapolis to take on a larger project like this. At least we can dream that they will.

I stopped by today to take a look at the project and actually talked with one of the students who worked on it. She mentioned that the main goal was to find more land to create more developable land in downtown in an effort for the city to achieve its growth targets for the future.

It sounded like their focus was a bit misguided though since the reason for all the parking under the 35W shelf was to replace surface parking that would be displaced with development of current lots just east of the metrodome. To be honest, I don't think that's something that anyone as ever raised as an issue.

The majority of the reclaimed land would come from cutting off many of the the intricate access points which this area so hard to navigate. The project would give the city roughly 4 new city blocks worth of land for new development. I think these types of ideas will gain a bit of traction once we use up the dozen+ city blocks of surface parking we have that's closer to the downtown core. 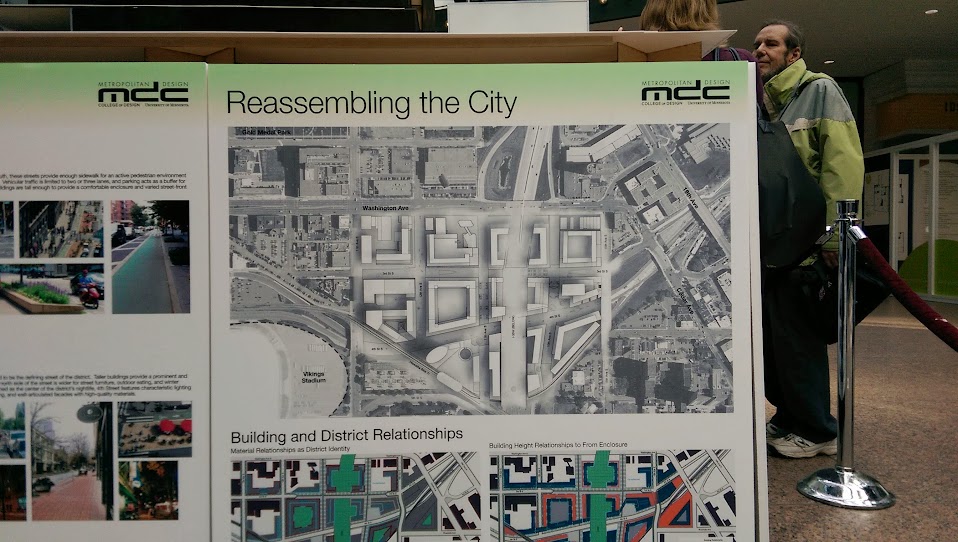 Between the CSAH 122 loop to SB 35W, and the regular Washington Ave to SB 35W entrance ramps, I've been debating which can be more readily eliminated. I used to assume that the loop ramp would go away, and I believe I've even seen it indicated as such on actual plans (not just late night forum fantasy maps).

I've reversed my thinking to now believe that the loop ramp should stay, and the SB 35W entrance from Washington (next to Bobby & Steve's) should be the one that is eliminated. Eliminating the Washington entrance ramp would allow reclamation of that land, as well as simultaneous redevelopment of Bobby & Steve's itself. It would also greatly enhance the safety of the Washington Avenue cycletrack.

As for the loop ramp, I feel that would be much easier to develop the air rights above, given the space available for building footings, while still maintaining full functionality of the entrance point.

Why not just get rid of the darn 122 trench? Then a reconnected 3rd/4th (crossing *over* 35W) can have a split diamond interchange with 35W. And the heavy movements inside the split diamond could have inside slip entrances to prevent those left turning freeway-destined vehicles from sitting at two of the three intersections. This would be for traffic from the U (Wash Bridge to 35W south) downtown traffic to 35W north. This was one of the elements of the mattaudio/mister.shoes plan, and IIRC it was also in the froggie adaptation.

Because I'm trying to be remotely realistic? Given that we just built an LRT line down there and are adding a new entrance to 35W northbound this summer...I just can't get on board with fantasy on top of fantasy.

I guess I don't understand the necessity of that loop ramp. I probably would if I took the time to look up traffic counts, but I haven't so I get to speculate. Just how many cars are coming WB through that trench and needing to go south on 35W? With Washington no longer a through route at the U and the bridge cut down to one lane in each direction, I don't see where all that traffic demand would be coming from. We'd be better off removing the loop and making SB traffic turn left across 4th St and share that entrance ramp—as the new NB ramp is doing.
The problem with being an introvert online is that no one knows you're just hanging out and listening.

A continuation of that thought...between the new stoplight for the NB ramp from 4th and the reconfigured lanes and intersections due to the LRT, 122 is well on the way to being de-freewayed. The loop ramp and the NB flyover to WB 3rd should be the next to go. There's a lot of valuable land to be found.
The problem with being an introvert online is that no one knows you're just hanging out and listening.

Because I'm trying to be remotely realistic? Given that we just built an LRT line down there and are adding a new entrance to 35W northbound this summer...I just can't get on board with fantasy on top of fantasy.

You're clearly not trying hard enough. You should spend some more time looking at the tarted up google map.

I just love that we have such a wide spectrum of opinions, from big dreamers for whom political/financial reality matters not (mattaudio & mr.shoes), to optimists somewhat grounded in reality (me), to whatever the hell MNdible is.

Y'all realize that I'm more pro-transit and pro-urbanism than about 95% of the population, right? If you think I'm some sort of extreme, you need to step outside the bubble.

For the record, I was just joshin' ya.

For real though, you should explain your positions or suggest an alternative instead of just trashing people's ideas. Like "That won't work because of _____" (aside from the obvious money problem).

I'm fairly confident we all understand that we do not actually work for the City/County/MNDOT and aren't actually deciding what gets built. But if we work together on concepts, discuss why a certain aspect might work or not work, we might actually arrive at something that resembles a thing that could get built. Many of us actually do have the ear of current city councilmembers, state legislators, and potentially our next Hennepin County commissioner.

Also, we should all be trying to get on Minneapolis' CLIC (Capital Long-range Improvement Committee) that actually does decide what gets built, with City money anyways.

I don't think I necessarily trash ideas more than anybody else -- I swear the other day I logged in and Mattaudio had posted bitchy comments in over a dozen different threads. Hey, we all have bad days.

And, I don't think this one is necessarily a bad idea. I'm also not a traffic engineer, so I have no idea if it would actually work or not, but conceptually, it has a certain appeal.

But it's just an idea, and it's a pretty far-fetched ungodly-expensive idea (and I don't believe for one second that the land sales will come anywhere near covering this expense). And it's just one idea -- it hasn't been tested against a bunch of other options to know that it's necessarily the right one. Please (to repeat a plea I've made before), don't be shocked and chagrined when the city doesn't start modifying their master plans to suit your particular flavor of fantasy map.

SO, in short, please keep posting your ideas! I enjoy seeing them. But have a little humility that you may not have come up with the perfect plan, and pay at least a little attention to the boring unglamorous realities of the world we live in -- this kind of infrastructure is very expensive, and we've got a lot of competing priorities. Given a few hundred million extra dollars, is this really where we'd spend it first?

Off of the top of my head, if I were going to bridge over the freeway anywhere, I'd do it at Park-Portland and 1st-La Salle where there are extant neighborhoods to reconnect to on either side, and the geometries are much simpler.

I just love that we have such a wide spectrum of opinions, from big dreamers for whom political/financial reality matters not (mattaudio & mr.shoes), to optimists somewhat grounded in reality (me), to whatever the hell MNdible is.

And I'd consider myself to be an optimist very much grounded in reality. You can think of me as the board's Henry Kissinger (except without the war crimes).

What would the MNdible of 1950 think about United States or Minnesota transportation policy in 1950?

You can think of me as the board's Henry Kissinger (except without the war crimes).

Can we have a "quote of the week" feature where people nominate candidates and we all vote, with the result displayed prominently in the page banner?

Not sure why some people get so worked up by ideas. We can still be realistic at the same time. But it's important to have a vision to move the political triangulation for the reality. Even if it moves it 1% or 5% (but in reality it's doing much more) it has a big impact on our results.

Not sure why some people get so worked up by ideas. We can still be realistic at the same time. But it's important to have a vision to move the political triangulation for the reality. Even if it moves it 1% or 5% (but in reality it's doing much more) it has a big impact on our results.

I don't think anyone dislikes ideas, but there is a point where ideas are so far afield of reality that the planners and politicians rolls their eyes and you harm your own reputation for future efforts. Pushing the envelope is great and it needs to be done to create political space, but pushing too far is counter-productive.

Of course, that line is nebulous and constantly shifting. Furthermore an individual's or organization's self-defined role around an issue informs how far it can push.

No, the line is exactly where I say it is, and I'm always on the right side of it!