McNair sounded out of the question at the first CAC meeting, but perhaps I nudged it back on to the table. The city and WBC both see anything less than Penn/Broadway as a no go. Remember that this was born as a compromise to BLRT bypassing that same intersection. I can't make the CAC next Monday so I won't have any updates. I was going to bring up gauntlet tracks for the McNair connection.

As someone who has been involved with the project more than any of us, what is the deal with the lack of a BLRT station at 34th-36th Ave? As far as I can tell, it has never been on the table or ever formally studied as part of the present alignment. I've literally only seen it discussed here on the forum and not ever on a planning document, despite it seeming like a no-brainer, with or without streetcar. Could a streetcar running Broadway>Oakdale change that?

For that matter, how about running the streetcar Broadway > Bottineau > 36th to a 36th Ave LRT station. Possibly extended to Hwy 100 in the future. Would be nice to clean up the freeway-style interchange at Broadway / Lowry / Theo Wirth as well (giant roundabout?).
Urbanist in the north woods

Are there any published maps yet showing these alternatives?

Would be nice to clean up the freeway-style interchange at Broadway / Lowry / Theo Wirth as well.

Note that there is no McNair option. Lupe-Rose development (joint developers of soon to be under construction Broadway Flats) also have been hinting at the idea of vacating McNair when they redvelop the southwest corner of Broadway/Penn.

Running down Bottineau west of Minneapolis is off the table. My guess is that Opat is to blame for the Robbinsdale alignment or lack thereof.

A giant roundabout sounds a bit silly for a streetcar that needs relatively straight tracks. Historically that was a roundabout at Broadway and Lowry. I'm not too familiar with the reason for no 34th Street stop. BLRT is a good ways from North Memorial and also runs in a trench. That would be an expensive station.
Scottie B. Tuska
scottie.tuska@gmail.com

The CAC narrowed the alternatives down from five to three last week. The options included three streetcar and two aBRT routes. Much to my surpsrise McNair was back on the table after I'd mentioned it at the first meeting. The CAC dropped the two Golden Vally Road routes in favor of the West Broadway options. At this point the front runners are the streetcar option that terminates at North Memorial and the aBRT that makes it all the way to Robbinsdale Transit Center. My favorite alternative McNair squeaked its way through the meeting. Any route that didn't serve Penn and Broadway was a nonstarter. All alternatives assume changes to the routes 30/7/14 in Robbinsdale and Golden Valley.

I mentioned a few items including terminating the streetcar at 34th or 36th and building a LRT station. I also asked why the route can't continue down 81 until downtown Robbinsdale running at LRT speeds along Bottineau Blvd. in Robbinsdale. I'm guessing it's the invisible hand of Mike Opat. North Memorial's rep was supportive of both options. Thanks for the ideas and keep them coming. 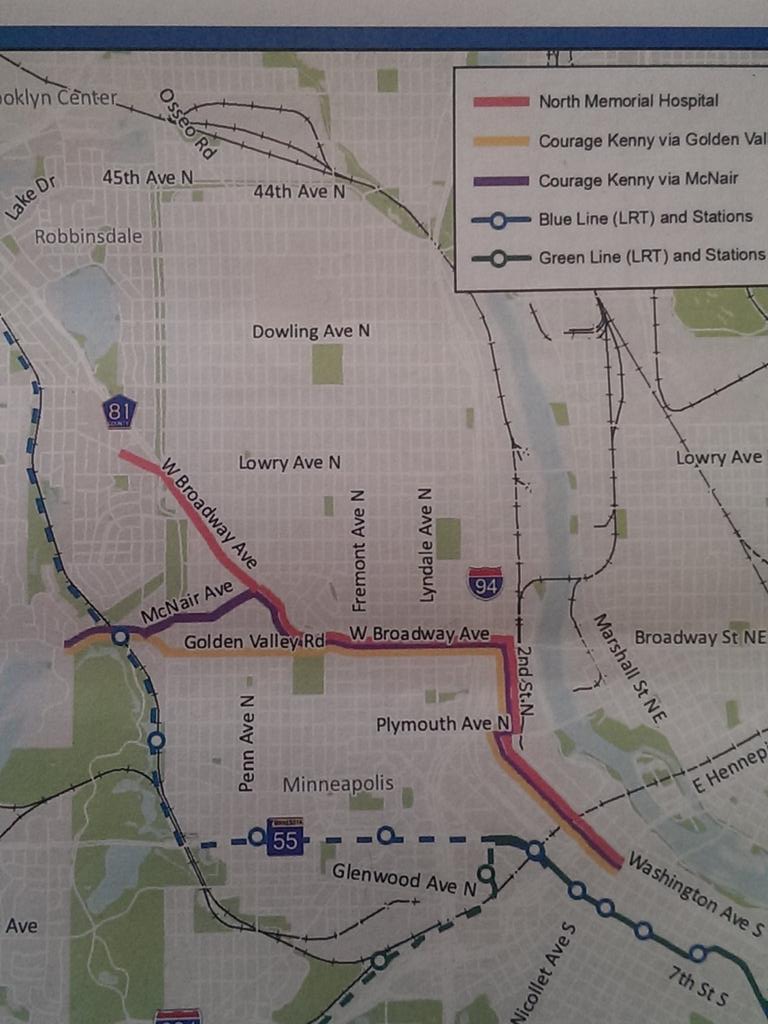 Golden Valley seems like a great route to plan it on. Good density and room to develop. Also connection to future light rail.

How are they considering options that don't connect to the Blue Line Extension to the northwest? Wasn't improved transit along this corridor part of how the "park" alignment was sold for the Blue Line? How would employees of North Memorial get to work via the Blue Line if they live in the NW suburbs? Transfer to a local bus in Robbinsdale or something, despite the presence of new aBRT or streetcar? Yikes.

This presentation from the May 8th PAC meeting suggests that the BRT to Robbinsdale and the Streetcar to North Memorial will be the alternatives moving to the next stage.

I suppose if the Streetcar option is chosen, Northsiders can still get to the Blue Line by taking the 30 (Broadway) bus to Golden Valley Station and North Memorial riders can take the 32 bus between the hospital and Robbinsdale.

Man, if we build a rail line that stops half a mile from a potential intersection with another rail line and never bother to make that connection, I just...wow. At some point, someone is going to look at that particular gap and the gap between stations on the Blue Line and lobby for a 34th/36th station—right?
The problem with being an introvert online is that no one knows you're just hanging out and listening.

Isn't the reason the streetcar stops short but the bus doesn't purely because of funding constraints? IE they want to keep the total budget under $250 mm so they can use small starts funding? If a streetcar to robbinsdale could come under that budget or if the limit was raised I'm pretty sure there would be no objection to going further.

I'm on the fence overall about streetcars. I can see their value over buses in driving development and in a perfect world I would replace every bus route with them. However in this case it's a choice between a bus route that makes even better transit connections than a streetcar and a more expensive rail option that is actually worse at transporting people.

ACS Is correct that the small starts constraint is the reason for ending at North Memorial. Also Robbinsdale doesn't want to tear up recently reconstructed roads. The info I shared is more recent than that PAC meeting. The PAC could drop the CAC's recommendation to include McNair as an option.
Scottie B. Tuska
scottie.tuska@gmail.com

The latest update really seems to drive the point that McNair isn't a feasible option. The preferred options are still the BRT to Robbinsdale and the streetcar to N. Memorial.

It sounds logical to make sure that North Memorial is connected to the blue line, but has anyone answered:

1) How many people work at North Memorial, live in the northwestern suburbs, and would take the light rail, relative to the overall ridership of the line?

2) Will the rail bias of a streetcar overcome the connectivity of a longer bus route?

North Memorial is a small fish in a big tank, and they've already downsized substantially. It''s only a matter of time until they get bought out by Allina, Healthpartners or Fairview, which will likely lead to further downsizing.

Good. That's exactly what I'd like to see out of this. Golden Valley Rd could start building more 2-4 story small residential apartments similar to what's on there today

Edit: Mdcastle, as you see this just about the ONE hospital and just those jobs, I see it as something that's helpful to North's economic realm.

The PAC went with staff recommendations and only the two West Broadway alignments, aBRT or streetcar, have moved on. This document came before that decision and the GVR and McNair options are off the table. Sorry to disappoint Grant. I've heard rumors that aBRT is favored at this point.
Scottie B. Tuska
scottie.tuska@gmail.com

So they're not doing 2 options? It kind of sounded like that from what Tcmetro said.

The two options are aBRT to Robbinsdale Transit Center or streetcar to North Memorial via West Broadway. The 7, 14 and 30 buses will be reconfigured no matter what Broadway alternative is chosen. You can see that on pages 16 and 17.
Scottie B. Tuska
scottie.tuska@gmail.com

While admitting that I know basically nothing about North Minneapolis and what's best for that community, the more I think about streetcars, the more I think there's no particularly good reason to do them over aBRT. In a vacuum, streetcar would win, but aBRT is so much cheaper for service that's almost as good (and doesn't preclude future investments as much, since its so much cheaper) that it's hard not to pick it. I mean, I know it won't happen, because different pots of money and whatever, but for the cost of the streetcar even as far as North Memorial, we could build aBRT to Robbinsdale, the C Line, the Chicago-Fremont aBRT, and something on Lowry or wherever besides. Same deal as with the Nicollet Streetcar, really.
Joey Senkyr
joey.senkyr@outlook.com

As proposed, would aBRT qualify for Federal Small Starts funding? If not, then if you're going to gauge the difference in what you can build, you should go off what the local contribution to a streetcar would be. That said, it would likely be more than just one line.
Post Reply
95 posts

Users browsing this forum: No registered users and 7 guests