Agree with twincitizen. Route 94 should be upgraded to 10 min frequency. End-to-end trip times are something like 20-25 minutes, and service could have ticket machines to speeding up boarding. All we need is MnDot to put in managed lanes and direct ramps to/from the CBDs.

So I used to take the 94 quiet a bit for my commute. I stopped for several reasons:

Waiting downtown on 6th is a horrible experience. Not only are shelters practically nonexistant, the streetscape is terrible. Even stopping in for grab a coffee before boarding is difficult.

It's impossible to predict when the 94 will arrive.

It's not frequent enough.

Fixing the frequency won't help the other things. I think any route running on I-94 during rush hour is not going to be reliable.

I'm not sure if it would ever actually happen, but imagine a scenario where one intercity line only goes into Target Field Station, and another intercity line only goes into Union Depot. Imagine that since all these lines are frequent, it's easy to make a trip across the state, connecting in the Twin Cites. Now, imagine you have to go from Target Field Station to Union Depot to make this connection. Would you be happy about schlepping onto a bus.

There's plenty that can be done to alleviate the problems David just stated, but in the end it'll still be a bus, and in that scenario wouldn't you rather be on some kind of train, but not need to take 40 minutes to do it?

Of course maybe that'll never happen and every commuter and intercity line will stop at both stations, and it won't be a need.
Peter Bajurny
peter@bajurny.us
@FISHMANPET

I believe MnDOT has a downtown-to-downtown "high-speed" rail connection under study now (one of these days I'll contact someone at their Passenger Rail Office about it...). I've heard that Milwaukee Road engineers would run passenger trains through significant chunks of the "Short Line" corridor at a full 79 mph, though I couldn't pinpoint any specific spots for anyone. Local railroad photographer Steve Glischinski put together a compilation of railroad timetables which indicates that the highest speed on the Merriam Park Subdivision today is 70 mph. However, when I've taken the Empire Builder, it hasn't seemed very fast through town, more on the order of 40-45 mph -- I imagine the 70 mph section he mentioned is probably east of the Union Depot (the Merriam Park subdivision apparently extends from just south of the Midway station to CP's St. Paul yard (across the river from St. Paul's downtown airport).

But maintaining a high average speed would be the critical thing, not necessarily top speed -- the BNSF yard by TCF Bank Stadium requires trains to slow down, as does the Minnesota Commercial yard just north of the Midway Amtrak station. Personally, I think it may be best to develop somewhat of a teardrop-shaped route, including the BNSF Midway Subdivision, which extends straight east from the Minnesota Commercial yard area, but it has additional yards farther east. Historically, there were four main tracks through the area -- two for freight and two for passenger. I'm not sure how easy/hard it would be to restore those tracks and maintain freight activities. It loops around the east side of downtown Saint Paul, which wouldn't be helpful for any trains continuing to run east/southeast toward places like Red Wing or Eau Claire, but it would essentially allow straight-through running for a Minneapolis -> St. Paul -> Rochester train, which would most likely take the lift bridge at Robert Street to head south.
Mike Hicks
https://hizeph400.blogspot.com/

If you had a train that ran from Duluth through Target Field to Union Depot, and a train from Rochester that ran through Union Depot to Target Field, you could just have people ride one of those trains to get back and forth between stations. I imagine they'd be pretty frequent, especially in comparison to anything else we might be running.

But once you've got the tracks to run trains between both stations, you might as just run all trains to both stations.

But then again, London's stations don't connect with heavy rail, Penn Station and Grand Central in New York don't connect, Metra in Chicago has 5 or 6 non-connected stations in Downtown Chicago, so I think the precedent is to not connect the stations.

But then again, those examples are within contiguous dense areas, whereas we're talking about two separate nodes. I don't know if there's any precedent for that elsewhere.

Yeah... Boston is another interesting case, where you can't get a direct connection between North Station and South Station, even though they're only 1.5 miles apart -- In order to transfer between Amtrak's Northeast Regional or Acela services from the south on the NEC and the Downeaster to Maine, the most straightforward thing to do is get off at Back Bay station and use the Orange Line to get to North Station.

To a certain extent, we're holding ourselves to a higher standard than others are, though they tend to be talking about having two or more stations clustered on the edges of the central business district -- to us, it'd be like having Target Field station plus another station over by the Vikings stadium (which honestly might not be a bad idea...)
Mike Hicks
https://hizeph400.blogspot.com/

But then again, London's stations don't connect with heavy rail.

I might be misunderstanding the lingo, but there are several tube stations that also have commuter rail. Charing Cross, Victoria, Paddington, King's Cross, to name a few.

Yeah, I guess this is a case of overloaded terms. They're connected by Tube stations, but not by... whatever you would call the stuff that runs on National Rail owned tracks.
Peter Bajurny
peter@bajurny.us
@FISHMANPET

Most of London's commuter rail lines feed into one of the main stations (Waterloo, kings cross, st. Pancreas, London bridge, paddington, Victoria, etc). In fact, the original Metropolitan line was designed to connect all of the rail terminals to each other, to provide quick connections.

Then there's Thameslink and Crossrail, which are more equivalent to the RER or the S-bahn, and there's the Overground, which are commuter lines that are publicly operated instead of privately.

Anyone going to be on his train today? I am curious as to the route and speed it is going to go. First passenger carrying run of UnionDepot to Target Field!

Weren't tickets to rail-volution $400+? I mean it sounds like a really cool thing but it's really expensive.

I am going to the Rail~Volution but didn't know that they are going to use Northstar for the reception tonight till this moment. I thought it was going to be on the Green Line?
Jonathan Ahn, AICP | hello@jonathanahn.com
Drawing lines on maps and dreaming really hard for living.

Can I ask what exactly you're doing?

I'm going on Tuesday, but only because I get in free as a speaker. Come watch Bill Lindeke and I fight about streetcars at 2:00 PM!
Nick Magrino
@nickmagrino
nick.magrino@gmail.com 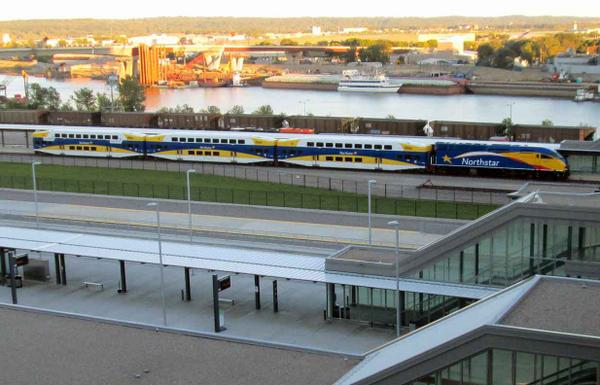 Can someone explain like I'm five: If they can do this for Rail~Volution, what are the things keeping them from doing this all the time? I assume trackage rights might be an issue?

I'm sure mulad or someone will be able to give a more detailed answer, but my guess is that trackage rights through the various rail yards are expensive. Additionally, there's (currently) no rolling stock to do it with. There's only five Northstar trainsets, and they're all in use during the rush hours.
Joey Senkyr
joey.senkyr@outlook.com

At this point, I'm not sure the demand is there.

Assuming that everybody that uses the 94 switched to this service (which isn't necessarily a safe assumption, because the 94 provides direct service to the downtown cores in a way that rail service can't), is there really enough demand to justify running a diesel trainset along this route? I guess there isn't enough demand on Northstar, but that hasn't stopped us from running it yet.

Anyway, I do fall in love with the idea of this routing, but I'm skeptical that it actually makes a lot of sense, at least until it's the last stretch of a Chicago to Minneapolis route. Or until we buy some DMU's or something.

Can someone explain like I'm five: If they can do this for Rail~Volution, what are the things keeping them from doing this all the time? I assume trackage rights might be an issue?

I thought about asking this same thing. Also, what route was used??? Did we ever get the route answered?

My guess is they stayed on BNSF the entire time rather than hopping over to the CP Merriam Park Sub by way of MNNR. Can anyone confirm?

But to Peter's point above, it completely makes sense that longer services can serve both stations and provide connectivity between the two. This is more reason why ZipRail should terminate at SPUD rather than MSP Airport. I know plenty of other cities who have local rail options on long-distance rail. For example, last time I was in Seattle you could ride certain Amtrak routes with Sounder tickets along the Sounder portion of the line. In other cities (Paris, maybe?) it's common that a local ticket will get you at least SRO privileges on intercity trains within the local area.

This is the way to connect Spud and Target Field without additional expense, other than the expense of making sure intercity trains serve or interline with both downtown train stations.

Assuming that everybody that uses the 94 switched to this service (which isn't necessarily a safe assumption, because the 94 provides direct service to the downtown cores in a way that rail service can't), is there really enough demand to justify running a diesel trainset along this route? I guess there isn't enough demand on Northstar, but that hasn't stopped us from running it yet.

Yeah. I'm not saying it's a bad idea (especially if done in conjunction with other regional rail), but the 94 carries about 4,500 passengers a day, and in my experience many of those folks are getting on/off at places fairly far from the rail termini in each DT. I would say adding a MnPass lane on 94 and some means of dedicated exits (plus actual E-W dedicated bus lanes through DT Mpls) would do more for the DT-DT crowd than a full-on, all-day rail service...
Post Reply
88 posts