Approximate system length is 1,270 miles! However, most if not all the routes outside the exurbs would have a single digit number of roundtrips per day.

I rerouted the line from Montgomery to use the Dan Patch Line between Savage and Minneapolis so its a one-seat ride Shakopee-Minneapolis. It would be difficult fitting that in with the Dan Patch Corridor, as the line would already need capacity upgrades just for trains to/from Northfield.

It’s a little hard to read on my phone... but I’m wondering why you’re routing seems to miss so many points of interest?

Looks like he's using existing rail corridors. So, there's no railroads near those points of interest.
Joey Senkyr
joey.senkyr@outlook.com

Silophant is correct. All of those destinations would be served by BRT or LRT on my rapid transit map which you can find on the previous page of this thread. This is only regional rail, which makes less stops and mostly uses active or abandoned railroad right-of-way.

As for the Ring Line not serving Downtown Minneapolis, there’s no easy way of getting it there and then back onto the loop, but there would be good transit connections to downtown from East Minneapolis/University and Broadway & Central stations.

Just curious, has anyone thought of fantasy ideas for stations/transit hubs be it vastly improving them or downright creating new ones?

Oh if this is ONLY regional rail, IMO there are WAY too many stops. Some of these routes seem to have more stops than the actual or planned LRT/BRT routes. Even if it is “fantasy maps” there should be a little reality.

My intercity and regional rail system map of the entire state:
https://www.flickr.com/photos/141802592 ... ed-public/

I doubt it, unless you're putting it like 80' up. The height limit can't be lower than however tall the park and ride ramp is.
Joey Senkyr
joey.senkyr@outlook.com

Maybe someday will get a DMU Northstar train...

My ABRT system for Rochester-https://drive.google.com/open?id=1olOia ... sp=sharing

Has anyone done a fantasy map of Broadway/Lowry/Victory/Theodore Worth?

Anyone else think the Southdale Transit Station should be further south? Say, on the northern edge of the Promenade, so that it’s walkable infrastructure all around it?

Besides a few short segments I think all of them would be "arterial" bike lanes, since these are meant to reduce travel time by bike and make it an attractive option for getting to places.

Don't know where to put this, has there ever been any talk of having some sort of "loop" type transit in downtown Minneapolis? Thinking of Chicago obviously, but using some sort of BRT system connecting the major neighborhoods of downtown,nightlife/recreational spots and shopping areas (Downtown east, Elliot Park, Nicollet, Loring Park, North Loop.) It just feels like most transit talked about in the Twin Cities is focused on commuting and not for the actual residents of Downtown to be able to leave their cars at home and visit a friend in a different neighborhood, check out a play, or stop by a brewery using public transit of some sort as opposed to driving or Ubering. I know there's probably existing bus routes to reach all of these destinations, but just having a simple loop that would be labeled on the transit map and colored, that had the updated bus stops of the BRT system so people easily knew where this thing picked people up and dropped you off, so that people just knew that if you were in Downtown you could just hop on the "loop" to get to basically every end of downtown.

I assume you are talking about something like the gold loop on here or the maroon loop.
However, using our existing transit infrastructure 7th & 8th St BRT stops (Purple) and 2nd & Marquette bus lanes (Blue) would be best for frequent loop service. The riverfront needs one too for Mill District & North Loop - 1st & Washington (Green) would be a good candidate for improved service/bus stops. 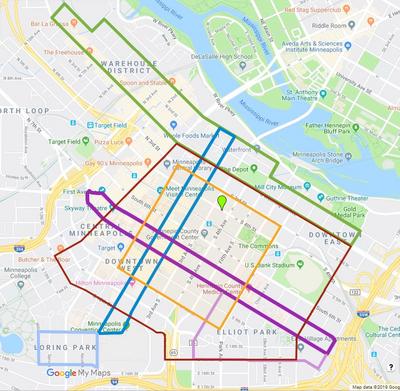