It seems transportation departments and ministries around the planet are all failing to predict future traffic demands accurately for the past decade. Not just the U.S. ... http://www.humantransit.org/2014/07/how ... ction.html

Are there any states or countries that have accurately predicted the current motorized traffic trends they are having for the past decade?

Is there a general trend that you're seeing (i.e. underestimates/overestimates projected traffic)? I see that the article talks about overestimating, but is that also what you're noticing?

This is what he's talking about: 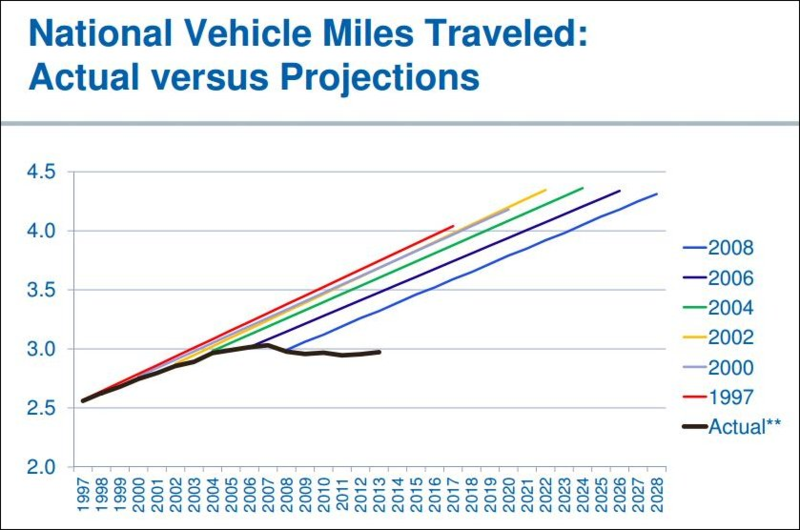 Planners have been predicting increased traffic for a while and it's hot happening, but their models aren't changing.

Second only to this, my favorite "missed projections" graph, though totally unrelated to transportation: 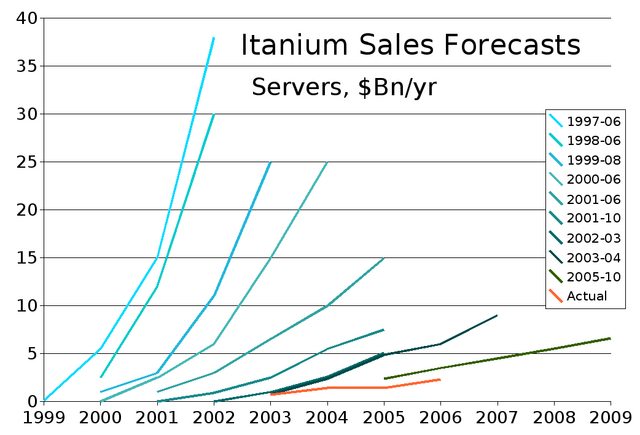 Second only to this, my favorite "missed projections" graph, though totally unrelated to transportation:

Off topic, but in grad school I sat in on an architecture reading group and we read all of the EPIC papers out of Illinois (EPIC was funded by Intel and Itanium is pretty much a carbon-copy). The professors and senior students all concluded that if EPIC were to be implemented it would be a huge failure.

Ever since that experience I haven't had much faith that hundreds of computer engineers with fancy letters after their names really know anything more than some grad student sitting in a cube.

Looking at the New Zealand traffic forecast graph, it does look like they are adjusting things, the slope of growth is less steep the more recent we get.

From David Levinson's blog, "...the severity of future congestion problems is systematically overestimated."

Two pertinent articles from the Atlantic:

Found a posting from Australia about the rampant failure to model traffic forecasts there too.

Will this be a year the traffic congestion worsening happens according to the expert forecasts? Or will it be no big deal as usual.

With all of the construction going on for hwy's 100 this year, 169 next year, I-35W in the north metro, etc. I don't see an end in sight anytime soon. Esp. for the SW metro. Isn't there a plan to formally rehab the northern half of I-35W in S. Mpls from 42nd street to downtown? That will also be a major major bottleneck.

On the other hand, it's amazing to me that a metro that's regarded as the 16th largest (15th, if you consider Riverside as part of greater LA) is only the 23rd worst congested metro in the nation. Off the top of my head I can think of: Austin, Denver, maybe Portland that are likely worse. What are the other 4-5?

(I know this isn't a projection, but this was the closest topic it would fit in)

I don't want to pay taxes. That doesn't mean I have a realistic choice on the matter.

Nope, but they loooooooove Uber.
The problem with being an introvert online is that no one knows you're just hanging out and listening.

WisDOT has been in court over its fantasy numbers in filling traffic forecasts.


Out of forecasts for 30 highway projects, the nonpartisan Legislative Audit Bureau found the department failed to document how it produced 28 of them.