The University of Minnesota's campus buses are either getting tracked by the NextBus system or will be soon. (NextBus is different from Metro Transit's NexTrip, but it's used by a number of transit agencies around the country while NexTrip seemed to be a local invention.) I just noticed that signs with QR codes for NextBus URLs and other information for texting for arrival info have been put up at campus bus stops. 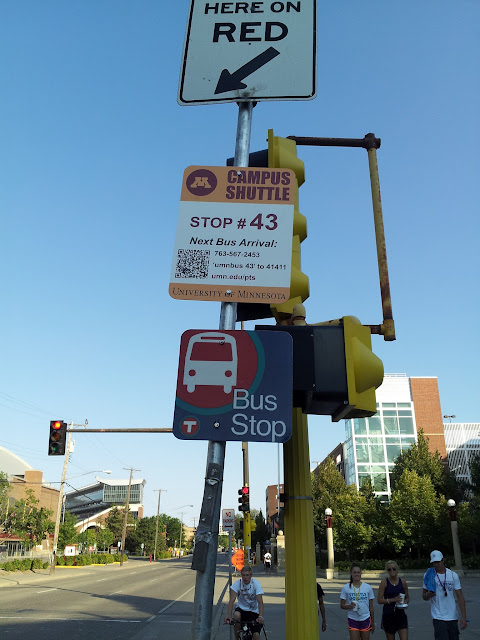 At least some bus stops are going to have dynamic signage too: 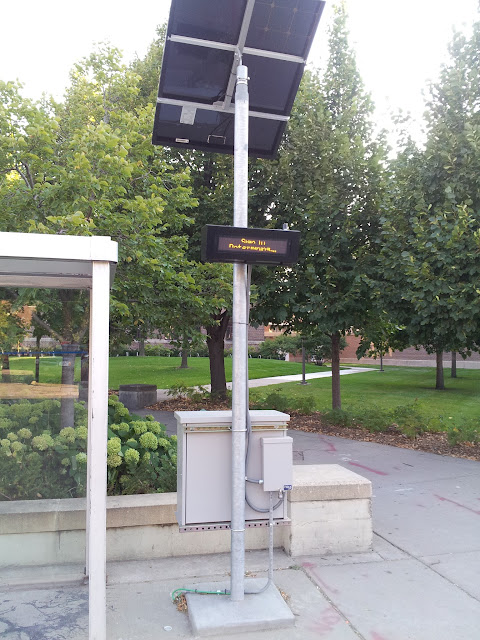 (LED panels are difficult to photograph, but that one wasn't working yet anyway -- it just said "Stop ID Determining...")

I had suggested something similar for Metro Transit a while back, but I'm not much of a designer. They've got experimental signs with numeric codes along route 54 suitable for texting or entering into a NexTrip app, but I always thought a QR code would be better in many cases, and I'm not a big fan of purely numeric codes for station IDs -- they're impossible for me to remember, though many Metro Transit stops have more easily comprehensible four-character codes.
Mike Hicks
https://hizeph400.blogspot.com/

...I always thought a QR code would be better in many cases...

The dynamic signage is nice too, but the QR codes look pretty handy and affordable! I'm guessing as advanced as GPS fleet management systems are getting MetroTransit could pump out pretty accurate infromation from a website!

Those QR codes are terrible. They're too high up in the air and the URL they point to is way too complicated. They need to be shortened (using the Us own URL shortener, z.umn.edu) and also they need to be at eye level or below (and preferably multiple copies in the shelter etc) and not 10 feet in the air.

It's like nobody stopped and thought about how someone would actually use them.

And going to umn.edu/pts on your phone doesn't even go to a mobile site, much less anything to do with the bus tracker. The best I could get on my phone was a real time map of the entire system, which was useless on my phone.
Peter Bajurny
peter@bajurny.us
@FISHMANPET

Yeah, that sign was definitely way too high -- simply plastering something onto the shelter would probably be better. I'm sure a lot of phonecams would have trouble deciphering that code since it's relatively far away -- using a URL shorterner of some sort would help, since it would result in a less complex code image that could more easily decoded under poor conditions. I know I saw another one somewhere else which wasn't so ridiculously placed, but I don't know what norm is or will be around campus.

And as much as I personally hate numeric codes for bus stops, they are easier to punch in on regular non-"smart" phones.
Mike Hicks
https://hizeph400.blogspot.com/

The Strib has an article about the bus stops today: http://www.startribune.com/local/east/168375806.html

I tried going to the bus tracking website, but it doesn't seem to be doing anything at the moment. The article implies it will be switched on tomorrow, though I imagine the system will be finicky for a while.
Mike Hicks
https://hizeph400.blogspot.com/

Seen one on Franklin where solar panel placed under a tree!

Seems like a huge ugly setup for such a small LED panel.
Q. What, what? A. In da butt.

Agreed, that is a ton of hardware for what could have been a simple LED panel mounted to the side of the bus shelter. I'm guessing most of that is to facilitate the solar power. Considering how little energy this thing uses, and that there is likely an electricity source available nearby...

Sometimes we are so smart, we're dumb.

by mulad » September 3rd, 2012, 1:12 pm
I tried going to the bus tracking website, but it doesn't seem to be doing anything at the moment. The article implies it will be switched on tomorrow, though I imagine the system will be finicky for a while.

I am reviving a topic from th old tread New Bus Stop Signs.

The Metro Transit T is making a comeback.

The test now includes locations in downtown Minneapolis along Marquette and 2nd Avenues as well as express stops along 3rd/4th streets and 11th/12th streets.

The signs along West 7th Street in St. Paul seems to still have the old new sign test

Since this is 2013, isn't there the opportunity to come up with some sort of dynamic sign that's cheaper and easier to deploy than NexTrip for regular bus stops like this?

Metro Transit taking suggestions on how to improve signage

Metro Transit is taking suggestions on how to improve bus stop signage. The survey can be found here:

Metro Transit is taking suggestions on how to improve bus stop signage. The survey can be found here:


I'm so glad they're doing this. My suggestion was a QR code to the trip planner with the origin already filled out. It's a more efficient way to answer the question, "How do I get to X from here?" than a big, confusing transit system map.

I have a fancy smartphone, but the mobile website frequently can't find my location (or I'm near many stops and I'm certain which jumble of words is the particular stop I'm standing at). Each stop should have at the very least the stop ID so I can input that on my phone.
Peter Bajurny
peter@bajurny.us
@FISHMANPET

Am I the only one who just uses google maps for transit info rather than the MT mobile site?

NexTrip is the only thing I use MetroTransit for, everything else I can get from Google.
Peter Bajurny
peter@bajurny.us
@FISHMANPET

I use the MT website. Google was wrong about a trip I tried to take when I first moved here for college in 2009. I don't even remember what the problem was, and I'm sure it's fixed by now, but I'm still leery of using it.
Joey Senkyr
joey.senkyr@outlook.com

I usually use Google Maps for getting directions, and the Android app "MyNexTrip" for getting NexTrip info. Occasionally I fire up the Metro Transit mobile site, but that tends to be a pain -- you can't access much info about individual routes on the mobile version, but the desktop site has more info than you need (and the schedule shows up in a scrollable subframe which my mobile browser can get "trapped" in -- I never understood why they made that part of the page scrollable by itself).
Mike Hicks
https://hizeph400.blogspot.com/
Post Reply
28 posts