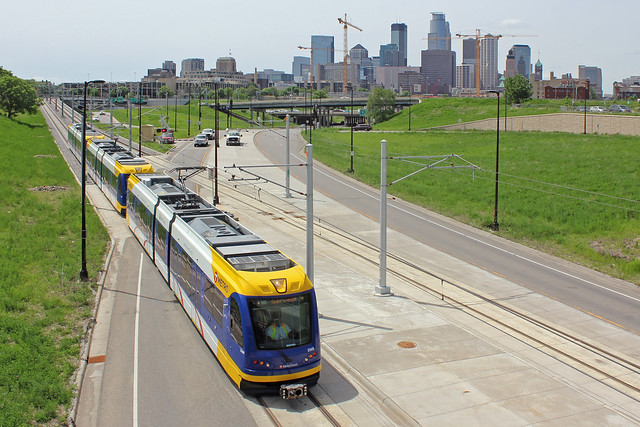 Green Line Test Train by MSPdude, on Flickr
This photo must be all over the tweeters and pinterests, because it has gotten almost 900 views in the 13 hours since I uploaded it.
My flickr photos.

MPR has a livestream of the LRT tracks online today.

Hey, all this talk of rain? Beat the rain, ride the train!
Gearing up to walk over to Target Field Station to ride this sucker end to end. Why not?!

Lots of people struggling to bring their bikes on the train today. Did they really think it would be a spacious ride? This is what Nice Ride is for!

Throughout the whole line. It felt like a few bikes tried to get on at several stations.

Anyways. I'm on my way back to MPLS now and waiting at the Union Depot Station could be mistaken as the Titanic sinking. MT employees all over yelling at people to stay back, hold their children, board on the opposite end of the platform, torrential rain/winds, etc.

I think that station really needs to get rid of its older platform.

Relatively small things like that I was hoping would be worked out by opening.
i talk too much. web dev, downtown. admin @ tower.ly

Yeah, I was a little disappointed by that. Also, some of the Bombardiers they're using for the Blue Line still don't have the new destination signs.
Joey Senkyr
joey.senkyr@outlook.com

I rode for a little bit. Trains were crowded despite the rain. Good turnout at the Union Depot. Not many using the Green Line shuttle buses, but quite a few on the 16 buses. Perhaps those people were avoiding the crowded conditions on the train. Unfortunately, I didn't use any of the connecting buses, so I can't comment on those.

Relatively small things like that I was hoping would be worked out by opening.

Would "DT St. Paul" be clear enough for most riders, or is "DT" not universal for "Downtown"?

Relatively small things like that I was hoping would be worked out by opening.

Would "DT St. Paul" be clear enough for most riders, or is "DT" not universal for "Downtown"?

Either of them are clearer than "Downtown St."

I just figure it should be the terminus as Blue Line uses and seems to be a standard. "Union Depot," "Target Field." But really any consistency would be nice, they're pretty scattered and varied right now. Really, even alternating it could work. Really for me, flashing multiple points of reference as buses do would be preferable: Flashing "Union Depot/DT St. Paul," "Airport/Mall of Amer," "DT Minneapolis/Target Field" Maybe even throw in a "via University Av," but that may be a little excessive...
i talk too much. web dev, downtown. admin @ tower.ly

I got out, took a few photos, and rode from SPUD to Snelling and back; felt bad for the bands, vendors and other exhibitors at the outdoor events; it was really blustery and rainy.

The "DOWNTOWN ST" signs were a bit odd. For the Green Line, seems like "St. Paul" and "Minneapolis" would suffice; not sure that the specificity of "Downtown" is useful.
Nick Benson | My Metro Transit Photos on Flickr | My Twin Cities Railroad Photography on Railfan Atlas

Apparently a car decided to drive on the tracks (what makes people think this is a good idea?) and got stuck on a switch... Delayed departure from Union Depot by about 15 minutes. Hope the switch wasn't damaged this time.t

As for just "Minneapolis" or especially "St Paul", that would be less than helpful when you're already in the labelled city.

What seemed to be what bogged down the travel time (I rode from Target Field to SPUD, and then back to TF around noon) was definitely not having signal priority along University. The ride was nice otherwise though.

There is signal priority on University. For cars. I've done my own anecdotal study over the last 3 months and even when they "turned on the magic" with 2 weeks to go, I always, ALWAYS had priority over the train. Me and my lowly Hyundai would cause that 3 car beast to grind to a stop so I could take my left onto 280.
They say there is signal priority for the trains but that's a bunch of stuff. I'm speaking of St. Paul. Mpls seems to have their stuff wired or turned on or whatever.
Last edited by ProspectPete on June 14th, 2014, 4:32 pm, edited 1 time in total.

Was really disappointed that festivities got cut short. I understand why, but we didn't have time to make it to the stations where we wanted to see old friends. I doubt there will be a make-up weekend but it sure would be nice.

I noticed that you can just barely see through the silvered windows on doors to the cabs of the Siemens cars. Here's a shot with my cameraphone pressed up against the glass: 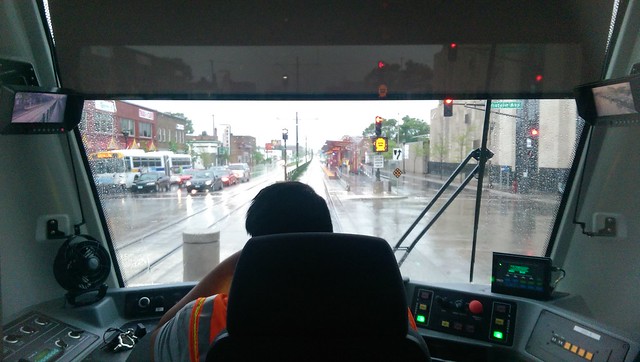 I stood at the door for a while on an eastbound train and saw a few things -- first, I was surprised that there are speed zones of 40, 45, and even 50 mph (in the trench under the Minnesota Commercial Railroad tracks by Menards and the old Midway Amtrak station). Those zones mostly seemed too short to be of any use (I think the train ended up getting stopped at lights before all of those faster zones). It's hard for a train to get up to 50 mph in the quarter-mile or so between Cleveland Ave/Transfer Road and Prior Ave, and then slow down again either to stop at the signal or drop down to the lower speeds on either side.

Second, the signal timing is just... bad. I think my eastbound train got caught a few times because other westbound trains may have been winning in the race to trip/extend signals. There were also a few intersections where the lights for cars were set up in strange ways. At least two intersections had the old-style signal phasing from before there were tracks down the middle of University, including the one at Fry Street, one block west of Snelling -- To our right, the left turn arrow was illuminated along with the green balls for the through lanes, and the left arrow was blocking the train from moving. That shouldn't happen. Maaaybe there's a good reason for that phasing, but as far as I'm concerned, the eastbound and westbound left turn lanes should share the same signal phase, allowing the trains to always go through whenever the through lanes have green lights (minus a bit of pad time since the trains can't slow down as fast as cars).

Also, looking down the line through the cab, I found it pretty confusing to see the blinking lights of the pedestrian crossings (each one appears to have holes in the side to let light from the signal come through, so the operators know that they're working). From a distance, those resemble the blinking vertical bars which tell operators to slow down. Given the stopping distances involved, I'm not sure my eyesight would be good enough for me to work as a train operator. Of course, the silvered glass didn't help.

We did get held up at one point because a fire truck came out of the station just west of Vandalia. I wonder how emergency vehicles affect the signal cycles.

Anyway, despite a slow pace of getting out of downtown Saint Paul on my earlier westbound ride, the train went pretty fast after getting to roughly Western on University, and I was actually a bit surprised when we pulled up to Snelling. The train went through the UMN campus area without needing to stop at signals, which was nice.

The view from the Washington Avenue Bridge has always been cool, and it was again today.

The bells for crossings at Target Field suck. It isn't just that there's one set of bells either -- there are four sets, as far as I can tell, which virtually guarantees that at least one set of the four will always be making noise, plus the e-bells of the trains themselves and some toots of the horn here and there.
Mike Hicks
https://hizeph400.blogspot.com/

I rode from West bank to central at about 2 and it took 47 minutes, including a substantial wait at Dale for a "short delay to allow proper train spacing". On the way back it took 42 minutes to get from central to west bank, not including my stop for tasty banh mi at the Dale station.

It then took FIVE minutes to get from west bank to dte, and when I got pdf to check out how they are handling the transfer, I was directed through a ridiculous set of barriers to where they were sorting eastbound / southbound passengers for green and blue line trains, calling out which train was coming and then directing people to specific cars. Even for opening day this seems ridiculous - I'd people can't listen to hear that it's a blue line or green line train, then they should have built two sets of platforms. But really, they are trying too hard and need to let people figure it out.
Post Reply
1284 posts