Strictly speaking, the money is coming from a federal CMAQ grant (they really ought to stop funding parking lots...), CTIB, the city of Anoka, and Anoka County (through their Regional Rail Authority):
Total: $10.3 million

The good thing is that much of the north side surface parking lot should go away when this is done, freeing up land for transit-oriented development. I think they're still ending up with more parking spaces than they started with, though. Maybe they'll be able to come to some shared-parking arrangement someday...
Mike Hicks
https://hizeph400.blogspot.com/

Even with induced limitless demand thanks to free parking they still find that they overbuilt their capacity? And at the same time decided a $10.3 million ramp that can't pay itself back was worth it? The only good thing is the available land for any sort of development that much closer to the station, but I sure won't hold my breath..

I hope LRV Op Dude is right -- I was under the impression that some surface spots would remain, so the station would end up with 344 in the ramp plus some others in an asphalt lot. I don't think I've ever seen full design for the project -- perhaps someone can poke around on Anoka's website. But at least surface lots can be torn out pretty easily if someone wants to redevelop -- easier than a ramp, anyway.

Yeah, $10.3 million seems pretty steep. They will be including a pedestrian bridge over the tracks, which ends up costing quite a lot since they include elevators for handicapped accessibility and are built with super-heavy-duty metal framing (sure seems overdone to me, anyway). So you're talking about a several-million-dollar ramp plus a pedbridge that probably clocks in at a couple million as well. Those each have their own benefits and drawbacks -- hopefully the pedbridge will prevent a couple people from getting run over, whether by trains or by cars. Judging by how much a life is valued at in dollars these days, the project is almost instantly worthwhile just for that. If you want to just look at land value alone, I'm not quite sure it'll work out in the end -- will they get enough out of the freed-up land in terms of property taxes and other economic activity to justify the ramp? Probably, but the numbers might get a bit tight.
Mike Hicks
https://hizeph400.blogspot.com/

Looking at this, there are no surface lots remaining: 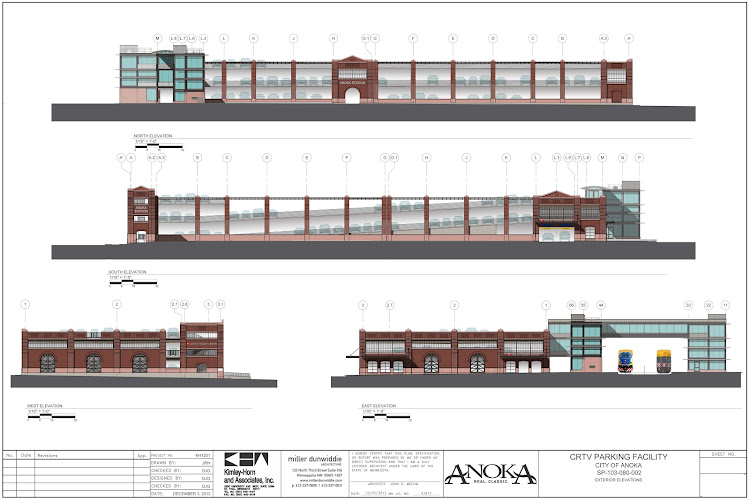 If Anoka can develop their master plan for the area, I think it will pay off. As of now though, there isn't much out there and there really has never been much out in this area except a little industrial stuff. Anoka is my hometown, and the area of this station has always been a ghost town.

I'll give Anoka credit though, for most of my life it felt as if the city was doing nothing productive, but in the last 10 years they've been making great strides of improvement. Their two big master plans; Greens of Anoka (redeveloping around the city owned Greenhaven Golf Course), and the Commuter Rail Transit Village (redeveloping around the Northstar Station) have been put into motion. On top of that, they've finished a number of improvements around town, amongst other developments as well which don't need to be in this thread.

I will note that the two master plans listed above will connect to each other. One of the big things of the Greens of Anoka plan is to better connect the Northstar station with their industrial park at the north end of the city limits. Right now you really have to go out of your way to get from A to B, but with the GoA plan, you'll have a direct route.

So, political realities aside, I've always wondered if there's an opportunity for short fare-less streetcar connectors to provide timed transfers to regional transit services like Northstar. Heck, Kenosha, WI built a streetcar circulator for $5 million. What about a streetcar connecting Main Street in Anoka to this new TOD area?

It is less than a mile (about 3k feet estimating via google maps) from the station to main street. Totally doable. The area from polk and 4th to the river and main has a bunch of development opportunities as well (current and future planned). In one of the city council minutes there was a mention by a council member about streetcars, but the idea was quickly discarded by the rest of the council (even a bus like street car like what osseo uses was quickly rejected).

I'd say in 10 years, if development pans out for both plans and downtown anoka fills out some infill they currently have available, I think it could be plausible to have a short streetcar. I've actually often though about how to best layout a streetcar route through anoka. You have huge corporations that call Anoka home over in the industrial park, as well as over in the Federal Cartridge area (I think Pentair is also over there), and you have have downtown south of the northstar, and the highschool, library, and two future neighborhoods north of it. And of course the suburban neighborhoods that fillout most of the northeast of the city. Some type of loop could be put together I'm sure.

For now, I would love to see some nice ride bikes setup around town, that would be especially helpful. There is already a paved trail that connects the mississipi, goes through downtown, through the northstar station, and follows the river to the highschool and to the library. I think nice ride bikes would be super beneficial to anoka.

It is not like there is no transit that run in the area. The Route 805 and Route 852 goes by there.

Metro Transit really needs to fix their site so links to articles work from mobile browsers. One of these days...
Mike Hicks
https://hizeph400.blogspot.com/

I'll be surprised if their ridership doesn't increase even more for May what with these gas prices.

I'll be surprised if their ridership doesn't increase even more for May what with these gas prices.

Whoa, whoa... slow down. Are you telling me that if the true costs of driving presented themselves people would ride transit? Despite all the reasons people give on how great owning and driving a car is? Lunacy!

Whoa, whoa... slow down. Are you telling me that if the true costs of driving presented themselves people would ride transit? Despite all the reasons people give on how great owning and driving a car is? Lunacy!

I agree with you and advocate for much higher levels of transit buildout for the metro, but I want to point out that owning and driving a car is pretty great - it's the slogging through a rush hour commute and feeling obliged to use the car on a daily basis that sucks. We have *five* street-legal vehicles in our garage - two cars, a motorcycle and two scooters - but I'll take the bus or train to work when I can. Cars are awesome, it's the commute that's stupid.

Amen, Tom. Too many people seem to get militant about transportation. Cars are a very useful tool and fill a gap in transportation options. There's nothing inherently wrong with cars-- it's all about the when, where, and why. What's wrong is when we treat them as the only option and build our cities so that cars are the only reasonable option for 90% of people.

Metro Transit really needs to fix their site so links to articles work from mobile browsers. One of these days...

I also agree cars (and more importantly to the economy, independent delivery vehicles of all sizes) are great. I've stated here before I have many street legal vehicles (that I wish to get rid of once I move). My point is that we've convinced ourselves as a society that we choose to drive cars simply because they really are that much more awesome than any other mode, ignoring economic realities of how they're subsidized such that other modes of personal transportation (transit) aren't economical or even possible (walking) due to our now 100%- accepted-as-the-only-option built form. Yes, commuting in rush hour traffic is stupid, but millions upon millions of people continue to do it because they haven't been forced to make the economic tradeoff of true car ownership and operation vs the comfort/freedom it provides (which has economic value, just not enough to keep everyone driving if the costs were what they should be).

WRT Northstar, I was just saying that even a $0.50/gallon increase and we start seeing people making that tradeoff. Now let's talk $9.00 a gallon and would the people utilizing park and rides realistically want to operate a car at that price anymore, even for their daily stuff? I'm sure some, maybe many would. But it would drastically alter many families's post-tax budget (to the tune of $1,500 more per year per car for many people, no chump change, basically reduces home buying power at today's interest rates by $30k!!).

The opposite could be said-
Lets increase Transit fares 'til people can't afford them and have to use their cars-
This makes exactly as much sense.

I use transit A LOT but I don't have to pay for it-
If I did, I'd just use my car, it's far, far cheaper, and radically faster.
(there's usually no one dealing drugs in it, nor do I have to hide my little dogs in my backpack!)

I'm just not ready to pressure people into transit- Right or as wrong as it might be, and hearing others talk about it makes me even more uncomfortable.