Thanks for that bit of news. Seems like strange hours, almost like a breakfast/lunch shift is all. Basically works for flights before 1 PM.

Great hours for the early morning business traveler who only has one carry on.

I would guess the morning would be when the heaviest traffic is going thru security. I'd think that the afternoon flights would be just as busy with flights taking people back home. But I'm not sure the ratio of morning vs afternoon/evening flights is like. Can any one help with that statistic? I've used the skyway check in twice for flight on the g concourse after getting off the blue line and taking the elevator up and I had maybe 2 people ahead of me the first time and a family of 6 plus an older couple the second time. Was still fast and painless compare to the chaos in the main terminal.

AHEM. I thought we all agreed that we were going to keep this checkpoint our little secret.

Unfortunately for you, TSA has caught up with the little secret...as I mentioned earlier, they were actively directing folks to Checkpoint 10 when I flew out last Wednesday.

"South Minneapolis residents increasingly sounding off on airport noise
More complaints were filed in June with the Metropolitan Airports Commission than in any month over the past three and a half years."

Seem to be the same old same old.

Here's a sidebar graphic that goes with the article (I really wish this was linked from the article page. Oh well.)

"South Minneapolis residents increasingly sounding off on airport noise
More complaints were filed in June with the Metropolitan Airports Commission than in any month over the past three and a half years."

Seem to be the same old same old.

I wish just one of these stories would discuss other very urban airports like MSP. There are several that are as close to the downtown core as ours. What do the residents do there? Is it the same? How does their Airport group deal with it - do they receive more complaints/less complaints? Have thousands of homes been soundproofed? All of that information matters a lot in the grand scheme of things. Are we an oasis of people who demand more - or part of larger group? And finally - what, pray tell, do these people who hate airplane noise at MSP, want? Less planes? Less noise? It's never easy to decipher.

I'm fortunate that I live nearly as close to the airport as possible (near the VA Hospital), but am not impacted by landing/takeoff noise. But I certainly feel for those who are. And if MSP has seen an overall reduction of airplane usage by 3% over the last 6 months, but a 13% increase in 10:30pm - 5am flights - then someone needs to explain that. Because that doesn't seem right.

But the airport isn't going anywhere. Period. That ship sailed in the early 90s, and won't be back again for a very long time (if ever).

For what it's worth, my wife and I were just discussing last night (prior to seeing this article) that the planes seem to be flying lower this summer than usual. I have no explanations as to why. And I can also agree that there are more late flights than there has been previously -- it used to be only occasional flights after 11pm, but now they are much more frequent.

Related, here's the MAC's presentation of their 2035 plan to the City of Minneapolis [PDF].

For what it's worth, my wife and I were just discussing last night (prior to seeing this article) that the planes seem to be flying lower this summer than usual. I have no explanations as to why.

Coincidentally, it's been very humid lately. And when it's humid, planes take longer to gain altitude. But I suspect it's more than the weather though.

Yeah, except it's actually the planes on approach for landing that we're noticing are lower.

Not exactly scientific but gives the general idea:


All distances between airport and "downtown" in driving miles based on Google Maps:

No idea what the distribution of complaints is here vs elsewhere, but having flown to/from a lot of America's major airports and preferring window seats I can say that our airport is probably unusually residential under the take-off path in prevailing winds (northwest).

To the south the departure paths are a little better because it's more industrial, freeways, and the MN river (you'll notice flying south they often fly that corridor particularly off rwy 17). But to the north it's residential in most directions and there's no easy way with parallel runways to do otherwise.

Go look at Google Maps of other major airports and you'll see what I mean.

We lack, of course, a take-off path over a harbor which has many advantages.

Sydney airport has vocal neighbors on noise issue issues, because like here the take-off path to the north goes over very residential areas (to the south: harbour). They also debated moving and decided to stay in place too (with an additional runway).

Relevant to the noise discussion, here's an article from Greater Greater Washington about an increase in noise complaints for flights in and out of DCA, which I also noticed was missing from MN Fats' list. DCA is just under 5 miles from "downtown" DC (based on experience, I'm defining the center part of the DC core as 16th and K NW), which would put it near the top of the list.

Because of post-9/11 security concerns, the flight paths in and out generally follow the Potomac River. You can see this in the GGW article.

Alaska Airlines will begin once-daily flights between Portland and MSP beginning in February. Service will be operated by SkyWest Airlines using E175 aircraft. A nice add from an airline that is quite small in MSP, and isn't super friendly with Delta right now.

There are often delays right now due to an operational change since July 17. Apparently there was a "close call" with a landing go-around on Rwy 35 and a departure on Rwy 30L (these two paths intersect). This may be in the media soon.

The "Aircraft Viewing Area" at the end of Cargo Road is under construction now, with the end of the road closed off, and an excavator doing some work. When completed in coming months, this quasi-park will offer spectacular views airplanes taking off from 30L (heading northwest), along with good views of both Terminal 1 and Terminal 2. It'll consist of a couple dozen parking spots, some landscaping, and a couple of picnic tables. 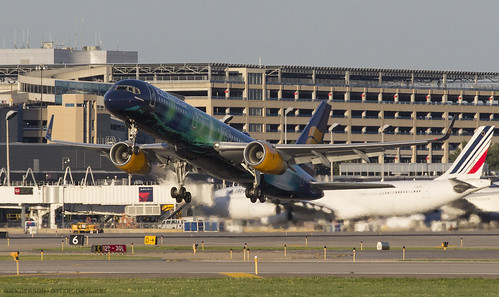 It'll be nice to be able to get photos like the one above without worrying about getting reported as a suspicious person.
Nick Benson | My Metro Transit Photos on Flickr | My Twin Cities Railroad Photography on Railfan Atlas

Wait. The public (i.e. my kids and I) can drive on that road? Why have I never tried that? I guess I assumed there was a gate involved at some point and I had no real purpose other than seeing cool takeoffs. Thanks for making me aware of this!
Post Reply
1271 posts