My favorite is that Rampton is the name of one of the four high security hospitals for the criminally insane in the UK. Former home of Jack the Ripper. My guess is when the developer reads this post, they change the name.

I know it's cliche to ask for an update, but I'd love to see this one move forward.

There are a lot of other projects I'd like to see move forward before this one. I'm not going to complain if it gets built, but I'd rather see something substantial at the Superior Plating plot first.

If the comment submission form on Cuningham Group's website works for anyone else , go for it. I tried to ask them for an update, but kept getting an error message. Pro-tip: always Ctrl-A, Ctrl-C before submitting comments into a form that may or may not work.

There are a lot of other projects I'd like to see move forward before this one. I'm not going to complain if it gets built, but I'd rather see something substantial at the Superior Plating plot first.

I rather like this project and its creative way of transforming a parking ramp exterior with human and pedestrian scale activity. I'm hopeful we will see more proposals like this in the future.

I rather like this project and its creative way of transforming a parking ramp exterior with human and pedestrian scale activity. I'm hopeful we will see more proposals like this in the future.

I agree. It's a very important project that could be a bellwether for future redevelopment.

Looks like the same project. At least there's still some life left in it

Someone should email the city or the developer/architect team and see if this really is still on the table. We discussed this a bit when the Alatus 35-story tower news broke, which proposes to wrap the other side of the parking ramp in units as well. I think we all just assumed that the Rampton project was dead, as it has never been mentioned once in any of those stories about the Alatus project.

Couldn't that bidclerk be for Corner Apartments instead of this?

How updated is the journal mpls development tracker? Because that still has it listed. That's how I checked on it. Corner is only 55 units.

Probably not very updated. And for the 3 or so years I've been following/tracking development, it's pretty rare that a cancelled project will have any kind of formal announcement. More often than not, they just go quietly into the night. Email Cuningham!

EDIT: It looks like I tried to do just that in April 2014, but had problems with their website's submission form. If anyone has a Cuningham contact, go for it!

EDIT2: I just downloaded the Rampton plans from June 2013, for the record. They tend to disappear from the city's website after 2 years. This would be a good one to keep, methinks.

EDIT3: Check the rendering from this Strib story back in July, it shows units from the Alatus proposal on the same side of the ramp as Rampton does, which suggests it's an either/or scenario, not both. (Though obviously both would be ideal!) 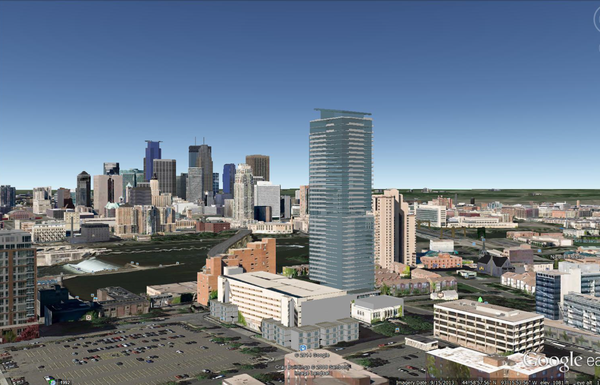 We may have discussed this before, but what is this giant parking lot in front and what are the odds of it being developed? Hopefully split up and developed and not one GIANT 6 story mega block. I know it's kind of getting into the neighborhood there, but it would be cool to see another 2 or three towers go in.

EDIT: Wow, sorry guys, I'm sick and apparently not quite awake yet. ^This should make a little more sense now.
Last edited by TommyT on February 4th, 2015, 9:07 am, edited 1 time in total.

It's all owned by general mills if i remember correctly so we can all fantasize but it's a big question mark.

Is that really owned by General Mills? The lot there is definitely a pay lot ($3 for the day or whatever). Are they still sitting on it from before when the mills were open or something?

Yeah, the Hennepin County tax database confirms that its owned by General Mills under the name of "The Pillsbury Co", same as the superblock to the east.
Joey Senkyr
joey.senkyr@outlook.com

The journals tracker is out of date and I find errors all the time. They have two separate listings for the Portland Tower, yet it has two different numbers. Who ever is in charge of the tracker is doing a lousy job when they update and keep track of developments. The 155 in NE is listed even though it was cancelled close to a year ago. It is a frame of reference, but is far from a true gospel of truth, when is on the development boards.

They also featured this in the Jan 15-2015 issue of the physical edition of the journal. It's in the sections about the $2 billion worth of city developments in 2014.

The wrap part of Alatus replaced Rampton. Maybe that's the 95 units being described. And maybe it is a different phase from the Alatus tower, but same project.
Locked
68 posts