The amount of retail space (22k sf) is similar to The Walkway in Uptown. Quite a bit considering this is on 1st Ave, not Hennepin. Then again, the area is poised to add thousands of new residents, and none of the other proposals figure to add much new commercial space. The USBank and Nye's sites are more or less planning 1:1 replacement of existing commercial space, and the Washburn-McReavy site would likely have a single large restaurant tenant.

Is it possible a CVS or Walgreens is headed to this site? The Lunds pharmacy appears to be the only one in this immediate area, so there's definitely room for a Walgreens or CVS to move in. It would certainly draw a lot of foot traffic up to 1st Ave and provide a very stable, long term tenant which could attract other businesses to fill out the space.

EDIT: I read the full article today which stated that Lennar did in fact buy the second block as well. All earlier reports indicated that they would not buy the other block at the same time. Lennar has rough ideas for what Phase II might include (300-400 units, less commercial space in a 20-30 story tower) but they are fully focused on Phase I right now. FWIW, Lennar still does not own the repair shop parcel at the corner of 1st Ave & 5th St NE.

278 units and all that commercial space might take a while to fill, especially if any of their competitors are able to start construction any time soon. Though right now it looks like Phase I will hit the market well ahead of any of the other proposed towers in the area, so they'll have possibly a whole year to themselves if they break ground yet in 2015.

I just saw some new graffiti on this site on the 3rd st retaining wall. It was "supercalifragilisticexpialidocious" and I was impressed. Haha!

I actually took a picture of it on my way to work! 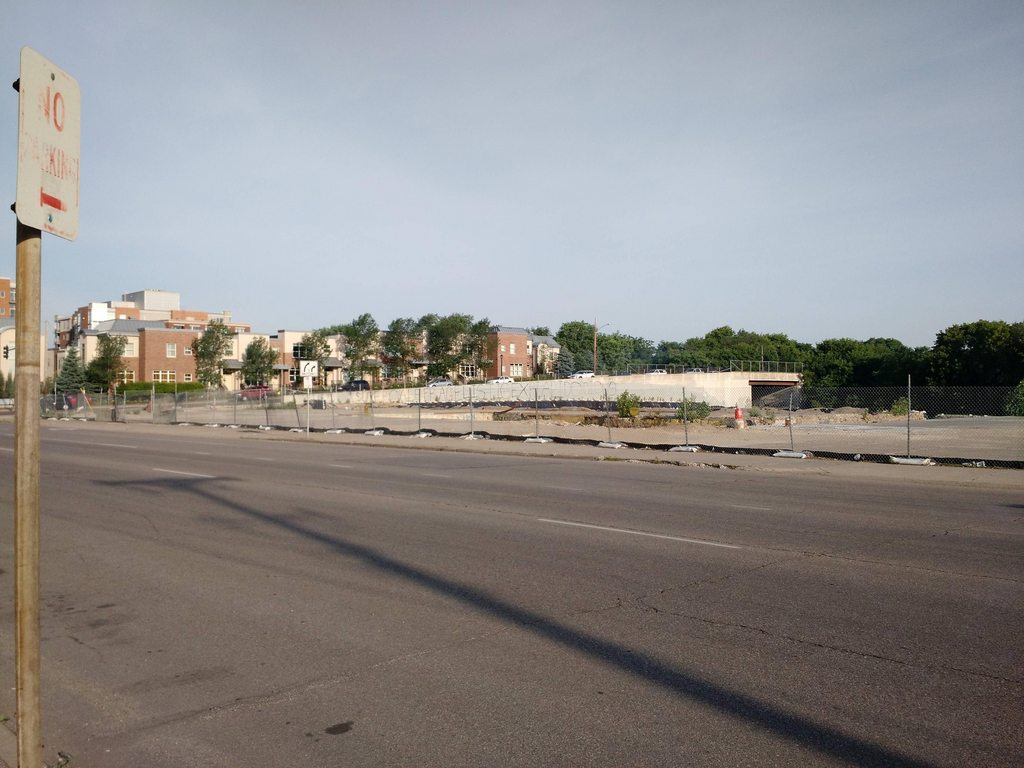 Sorry I'm on mobile and I honestly don't know how to resize from imgur.

This might be called NORD, according to the ESG poster on display at the Crystal Court. 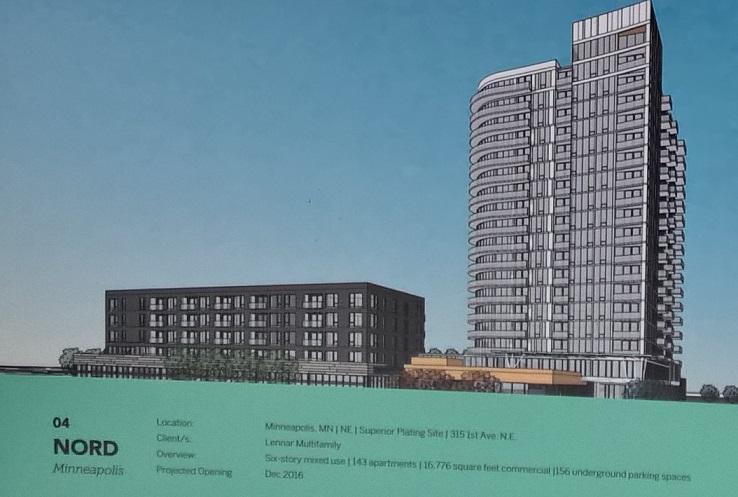 To stave off any distress about the listed height and unit count: Those last two lines were apparently copied directly from the ABC Site section of the poster, that I cropped out. Additionally, 100 Hennepin is listed as being 13 stories tall. They kinda dropped the ball on this one.
Joey Senkyr
joey.senkyr@outlook.com

When you have 24 different hotel/multi-fam projects in the Twin Cities, it's hard to keep track.

It's pretty astonishing when you consider that five years ago, they were down to a skeleton crew. They probably have six times the employees they did during the recession.

I actually took a picture of it on my way to work!

The best thing that could happen for the future of retail and sidewalk activation on this site is to two-way 1st Ave NE.

Or calm it with a cycle track, dedicated bus/streetcar lane, trees, bulb-outs, and 2 10.5' one-way lanes.

Nope, has to be a two-way street for real urban street cred. Those are the rules, sorry.

It's pretty astonishing when you consider that five years ago, they were down to a skeleton crew. They probably have six times the employees they did during the recession.

Arch, have you worked with them?

So is there actual work started now. Or just a pretty chain link fence to dodge all winter? IS this project moving forward or still spinning it's wheels?

There have been a few trucks there once or twice a week but I haven't seen any actual construction or demolition going on. They finally screwed the fence into the sidewalk after it blew over one too many times.

I was under the impression that they were still finishing up the cleanup/abatement of the site.

Met Council awarded a grant for $395,000 for sidewalks, lighting, benched, and public art.

Not sure that this is enough to tip off the development ... but it is really great to see that things are still in the works. I wonder if they are still going to try to break ground this Spring?

I see trucks there everyday. Each day it's something new that they're testing on the site. I wonder if the site was more contaminated than they thought.

If that grant isn't for calming first ave NE then it's a total waste because that stretch is incredibly pedestrian-hostile.
Post Reply
618 posts