Great picture! Very interesting to see the wall forming along Washington, with the future capstone soon to rise out of the ashes of Arby's.

Great point. I never really thought that WaMu would act as a wall at the end of Washington. That will look pretty cool when complete.

What a huge improvement in just a few years. The only loss since I lived there seven years ago is Espresso Royals and the falafel place that became the korean rib place that became something else. Heck, for all the crap they get even CVS is better than the dubious pleasure of buying food at Harvard Market.

What a huge improvement in just a few years. The only loss since I lived there seven years ago is Espresso Royals and the falafel place that became the korean rib place that became something else. Heck, for all the crap they get even CVS is better than the dubious pleasure of buying food at Harvard Market.

You mean the always damp, always dirty Harvard Market that had chipped and broken flooring which appeared to be asbestos? I still wonder why some people where upset to see that go. That place was beyond a dump.

There were two different ones, of course. I have much more fond memories of the original from 1904 was by the intersection of Washington and Harvard, and closed in 2007 and was replaced by a Jamba Juice. It was cramped as hell, but had many of the essentials for a college student.

Harvard Market East at Washington and Ontario opened in the 1950s. It always seemed to have a lot less character to me, despite having much more room to stock product. They had enough room to be an actual grocery if they wanted to. Finding the right business model in the shadow of a university must always be really tricky, though -- the basic business cycle is different (few people around on Thanksgiving and Christmas, and summer is quiet too), and a big proportion of the customers live in dorms that don't have any cooking equipment aside from microwaves and the odd hotplate. The new construction is making it more obvious that there are (and have always been) year-round residents who would like to cook for themselves in apartments and houses in the nearby neighborhood. I don't foresee any deli counters opening up in the area soon, but I'm certain the CVS had a better selection of fruit the last time I visited than Harvard Market East ever had...

Also, admittedly, I mostly just visited the stores to get money out of their ATMs. I often picked up other things, but I probably didn't buy anything on most visits.
Mike Hicks
https://hizeph400.blogspot.com/ 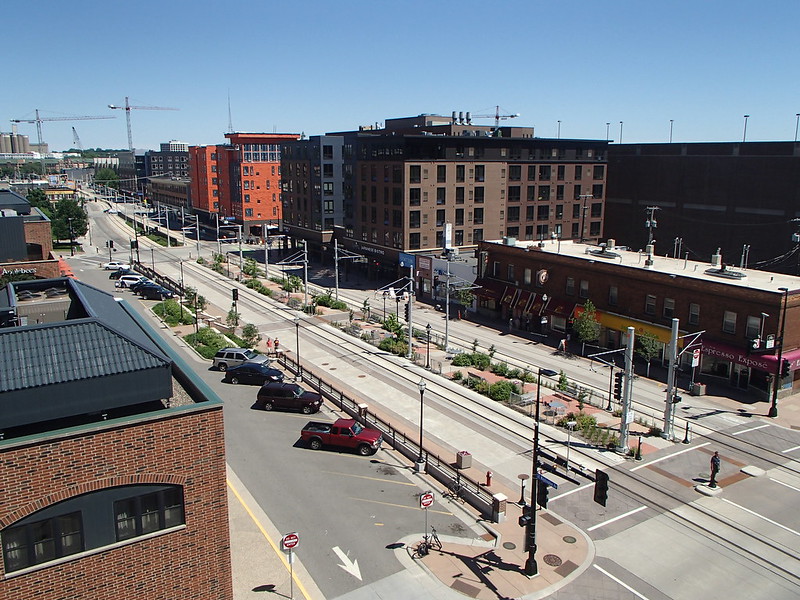 These pictures look so much better with no snow on the ground.

Is there any chance of ever getting rid of that parking lot in front if the Commons Hotel?

Is there any chance of ever getting rid of that parking lot in front if the Commons Hotel?

I don't see how you'd get rid of it short of replacing the whole hotel.

But you still need to have that drive way for access to the main entrance of the hotel.

Crude ideas:
1. Any chance they could open up the back to Beacon Street? It would allow the main entrance to be very urban in front, but still maintaining vehicle drop-off in back.
2. Even if they keep the loop in front, connect it to either Walnut or Harvard as a two-way access alley. I'd suggest Harvard, because that would allow new storefronts to be built, eliminating some of the retaining wall on that block and the giant brick wall that is Applebee's.

Does anyone know what that old brick building on Delaware is being converted to? Looks like a pretty extensive rehab. It's kitty corner to the back side of WaHu.

Yes, that's the one... thanks!
It looks like a heavy duty building build for the long haul.

Looks like Jamba Juice closed next to the big 10
And village wok.

We were just thinking Tuesday how a tasty dinner at village Wok would be nice, and then I said 'No, there's nowhere to park anymore.'
Q. What, what? A. In da butt.

Looks like Jamba Juice closed next to the big 10
And village wok.

Are you saying "the Jamba Juice next to... Village Wok" has closed, or that "Village Wok has closed"?

I will be taking a walk over there this afternoon just for my own peace-of-mind.
Post Reply
153 posts