if you zoom in, it is clearly a parking ramp. See the ramp coming up to the top level and what would be the stairs and or elevator off to the front right corner of the structure.

Looking at these earlier schematic designs...It seems like it maybe be a duplicate of the ramp that is already there, and there is something weird about the rendering? I mean it is the exact same shape as the existing ramp is in these old ones... I agree, I think the newer rendering is improperly scaled on the satellite image, and the "new" parking structure is actually the existing parking ramp. They share a similar design, including the stairwell that faces 2nd St SE.

I agree, I think the newer rendering is improperly scaled on the satellite image, and the "new" parking structure is actually the existing parking ramp. They share a similar design, including the stairwell that faces 2nd St SE.

I think your explanation is correct. They scaled the rendering wrong. Which means... "OMG, IT'S GOING TO BE TALLER THAN IT LOOKS IN THIS PICTURE. WHEE!" *ahem* Sorry.
The problem with being an introvert online is that no one knows you're just hanging out and listening.

It's pretty obvious when you look at the size of those blue cars.

Is Skyline really going to be the name of this project? That's the name on the building in the good render.

So they're covering the ramp in glass, then? I can live with that.

I like the modern design; however they're totally underutilizing this prime site. I can't believe they aren't making the building wider and using the full width of the lot so they can have more skyline facing units.

I don't think they are planning to cover the ramp in class. It'll probably be a perforated metal screen which creates a design based on the placement and size of the holes similar to the parking garage screen of the Mountain Dwellings condo building in Copenhagen. 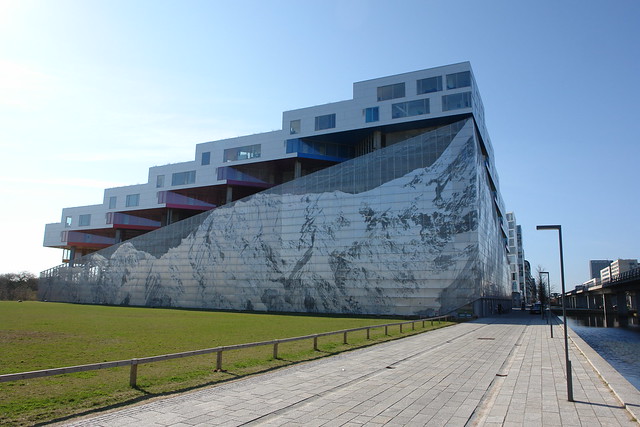 Now that I have that resolved in my mind. WOW. the crown of the building and the design tweaks are actually much nicer.

This is fleshing out really nicely.

Maybe I've missed this, but are there plans for this project to start anytime soon?

This has not been approved by the city in any way, shape, or form. That includes needing the HPC to approve demolition of the existing buildings on the site. I am a little surprised they haven't at least gotten that ball rolling. This developer does seem to be able to move quite quickly (see Latitude 45) from concept to execution, but as stated above, if it is indeed condos, that will add another 6-12 months to the timeline to allow for pre-sales. As I noted just over a month ago, Alatus anticipated making a decision on condo vs. rental by the end of the year, so that announcement should be forthcoming. If it's rentals, they could very well go through approvals over the winter and be more than ready to break ground in the spring.

Nothing has changed in 2.5 months. Still hasn't begun the approvals process. They never did make that announcement on the condo vs. rental decision in December as they said they would. Surely that decision has been made by now, but it hasn't been made public for some reason. Perhaps an enterprising forumer could suss that out from the new renderings or other peripheral information. It would mean a difference between 185 units and 250 units.

Hopefully they'll submit applications to the city soon. It's going to take at least 2-3 months to get through HPC, Planning Commission, and City Council. There's a real possibility that the HPC will deny demolition of the funeral home building, meaning that they'd have to appeal that decision to the City Council. Total time from application submittal to final approval (staff review time and through the 3 decision-making bodies) could easily push 3 months. If they don't submit soon, they won't be breaking ground in spring, as they once said they hoped to. As noted above, if it is condos, I'd expect the timeline to be stretched out even further to allow for pre-sales. Considering there is literally next to nothing on the market, I don't think they'll have any trouble at all finding enough buyers. My money is on fall demolition and groundbreaking, at the very soonest.

^Regarding condos vs. apartments...

A certain council member let slip during a chat that this was almost certainly condos based on their discussions with Alatus.

this article says they have been in negotiations with the ramp and that's their plan but who knows if that's for sure or not?

That's great info. Spring seems to be a stretch, but it sure would be exciting to see this project get off the ground by summer.

Has anyone heard any updates on this project?

Finance and Commcerce just announced that Alatus has closed on the properties for the tower!!

Frustrating that the media keeps reporting "40-story tower" when it was announced long ago that they had settled on 35 stories.

Read back to the beginning of this thread - the initial announcement/rumor was 25-30 stories, then it grew to "35-40" and was quickly announced as 35 stories, firm. Obviously this could change again, but the 35-story announcement sure seemed like an official statement at the time. The weird thing is they still haven't announced the condo vs. rental decision. That was supposed to be announced back around Dec/Jan. We'll know the answer to that as soon as we hear an official unit count (~185 vs. ~250, based on previous statements)
Locked
898 posts