I went to the Tame Impala concert at Surly’s outdoor venue (amazing show BTW) on Tuesday and was blown away by the entirely-from-scratch neighborhood taking shape here. We took the train of course, and walked along 4th from 29th to Malcolm. Things are happening!

Here's the view from University. You've got to wonder how long the Teamsters will stick around in their building. I'm sure they could move elsewhere with little trouble, but they could also follow the Sons of Norway example and make a home for themselves in a new development. Either way, the precedent for 10-15 stories has pretty clearly been set. Given that the Teamsters site would be narrower and smaller, redeveloping it might lead to a taller building.

The Teamsters building is pretty interesting if you hold your hand out to block the ground floor parking. It'd be fun if the architects of a future tower on the site borrow the white fins motif. 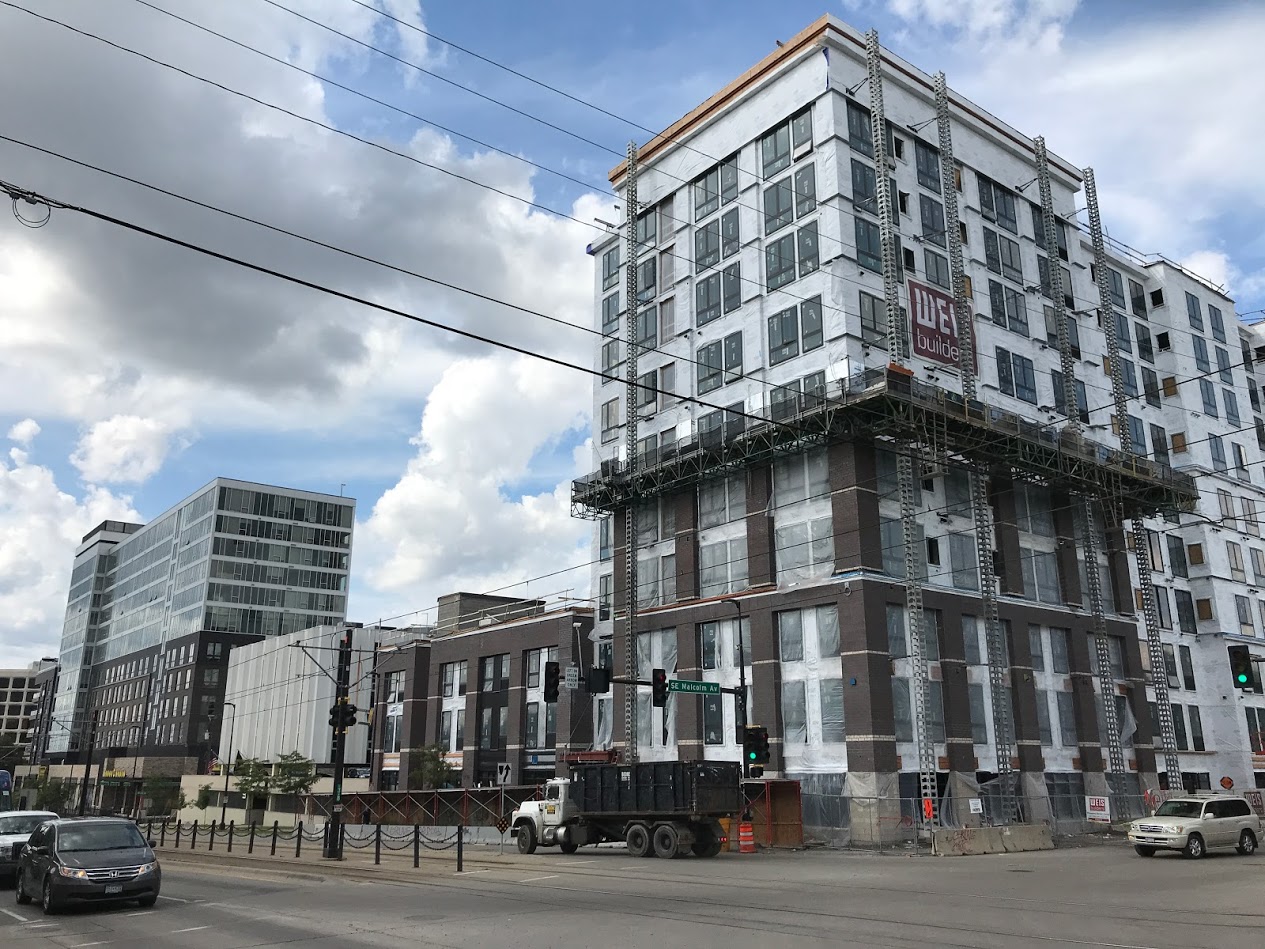 Again per Robin Garwood, The Louis is done. I hadn't known it was so close, since they only recently put on the facade, but I guess they did that almost last. I was concerned about the small, square windows on this one, and it doesn't look good in the grey areas, but there is enough variety in the facade with how the windows are treated that I ultimately don't mind.

This project is across 30th Ave SE from the Green On Fourth, and as I wrote above and on the previous page, it's the third building in this area, with two more under construction and the Malcolm Yards project yet to start (to my knowledge). There's also the Ruffridge-Johnson Equipment Co. industrial parcel on the other side of the block from The Louis that is developable and the aforementioned Teamsters building across the street. More multi-family density on the way, and plenty of potential for more.

The only downside is that The Louis and neither of the two buildings under construction have retail space. While there remains unfilled space in The Link building, it's maybe hard to see more retail getting built here, but hopefully these new residents begin to improve the market outlook for the area. A retail space on the University side of a Teamsters redevelopment would be a must, and a Malcolm-facing retail space in a future Ruffridge-Johnson redevelopment would also be nice to see.

Another hotel proposed for Prospect Park.

This would be adjacent to the big Art & Architecture project. Wells Fargo next door also still has a huge, underutilized space that can't be long for this world.

Growing Prospect Park neighborhood may get another hotel *LOCKED*

Gist:
Kaeding Management is planning a 102-room Residence Inn by Marriott hotel. The Bloomington developer and operator has submitted plans to the city of Minneapolis showing a five-story extended-stay hotel with a rooftop patio, fitness center and 67 parking stalls, 37 of which would be in an underground garage.
You do not have the required permissions to view the files attached to this post.

Disappointing to see the spread of these cheaply designed hotels along University. This is a good site, I was hoping for much better.

I don't pretend to an 3l33t h4x0r, but a quick glance under the hood at the page source of that *LOCKED* bizjournals link turned up a link to z.moatads.com, which is pretty well known malware, FYI. Maybe if you have an account they don't try to infect you? Or maybe it's really harmless, and I just barely know enough to scare myself...

I think it's less likely that they're intentionally trying to hurt anyone with their site and far more likely that they're just trying to get ad revenue and the person in charge of doing so is probably five years behind online ad best practices that would better protect consumers from scummy ads.

Star Tribune has also sent ads to me that locked my browser and tried to get me to call a fake tech support line, so it's not like they're alone in being behind.

I found it by accident. All I wanted to do was open the picture in a new tab so I could zoom it. When a site disables that I always get interested.

IOS appears unaffected, not sure about Android.

I wrote a short blog about what has happened to this neighborhood and the effect on ridership at the Prospect Park LRT Station. Spoiler alert: it's up in a big way.

Maybe veering a little off your central point, but in addition to all of the new development you mentioned I'd consider the Hampton Inn & Suites and 44 North to be part of the same transformation around Prospect Park Station. And now that I think about it, technically M Flats might actually have been the first new building to go up? Though probably the most forgettable, too.

The Westgate stop just up the street is an interesting case study, too. This area started redeveloping before the light rail, and it was being marketed as "LRT living" (or something like that) for years before the train actually opened. The last key plot to be developed was at the corner of University and Emerald, but a proposed office building with Mississippi Market on the first floor was unable to get off the ground before the recession. It eventually became 2700 University in 2016.

Looking back, you wonder what everything might have looked like had the Mississippi Market worked out. Surly made the Towerside area "cool," but the Link/Fresh Thyme was the anchor needed to attract all of those other new buildings so quickly. Would that have happened with a Mississippi Market right up the street? Hard to say. Instead, Westgate became kind of a bedroom community with a lot of housing but not a ton of other amenities. Even the longtime Dunn Bros shut down a few years ago.

I'd argue that the Fresh Thyme development was ultimately better than had Mississippi Market gone in, even though the latter would have benefited me having lived next door for about 10 years. Given the location, and that it would have predated the LRT, Mississippi Market would have no doubt been pretty car-centric. Fresh Thyme, meanwhile, had a huge impact on the Prospect Park Station going from one of the quietest in the early years of the green line to being in the center of an entirely new neighborhood in the span of just a few years. Now they just need to get a restaurant for that corner space at the Link.

Westgate is interesting for a bunch of reasons. With 2700 University and now the massive Weyerhauser yard development going on a couple blocks to the south, there is a huge amount of housing within the station's walkshed. I think that would surprise a lot of people, because all of it is sorta tucked behind the two apartments fronting University. The Wells Fargo is still auto-oriented, and the redevelopment of the drug store into an awful-looking hotel is not going to really add much to the vitality of the area.

Westgate has a particular problem in that the entire north face of the street is really hard to the develop. The eponymous industrial center is a massive block with seemingly good occupancy. It would take a significant up-front investment to redo it. KSTP is unlikely to go anywhere, they have a great central location and a massive tower that probably wouldn't get approved anywhere else. The Speedway/Super America has some immediate potential, but that's about it.

That's sort-of the case with Prospect Park Station as well, with the south side being tougher. But as you mention, the M Flats, 3020, and the Hampton Inn show what's possible. There is space for at least one row of higher density uses (nobody better displace the Textile Center though).
Post Reply
193 posts