Look to the left, they caught a guy Nice Riding in a Suit

The new streetview actually covers a lot of downtown. A lot of cool transformation in a year. Can't wait to see it next year, assuming Google will probably be able to update street view more and more as technology and their company evolves.

Look to the left, they caught a guy Nice Riding in a Suit

Did that last week (tie was in my pocket, though).

This may be fixed by the time people look at it, but right now a Google Maps search shows that the city of Minneapolis has de-annexed it's southern third. Apparently I now live in the township of Richfield.

This may be fixed by the time people look at it, but right now a Google Maps search shows that the city of Minneapolis has de-annexed it's southern third. Apparently I now live in the township of Richfield. 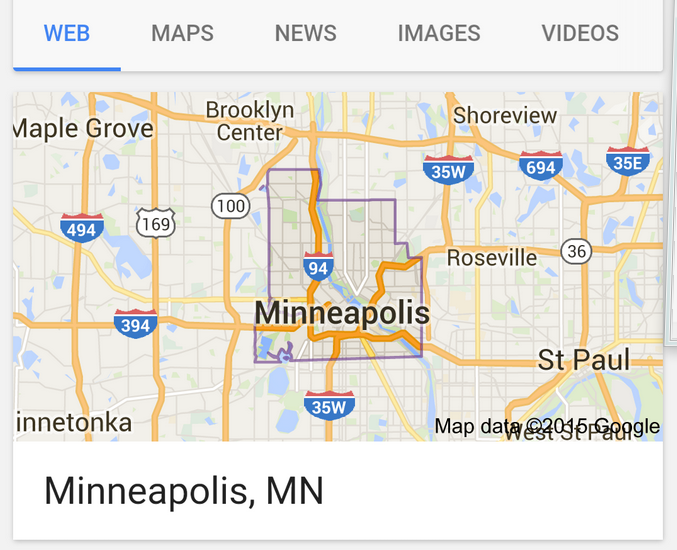 Also, is that little pocket to the west of Ryan Lake up northwest accurate? I never realized it was there if it is.

I don't think it's quite right. I'm not sure what the most authoritative source is for Minneapolis's border, but the city zoning map is probably pretty accurate: http://www.ci.minneapolis.mn.us/zoningm ... maps_index

That shows a tab extending out into the lake. The northern side hugs the CP rail line really closely, and then it goes straight south after getting 3/4 or so of the way across the lake.
Mike Hicks
https://hizeph400.blogspot.com/

I'm still waiting for my area to get updated photos. Some of the areas haven't been updated since 2007.

I'm had the same as you. Some were easy and others took some thought.

Also the 3d models have expanded to some of the suburbs. Previously only downtown worked for me.

For those of you that have the downloaded version of Google Earth. The metro area has been updated to 8/11/2015.

They have some street view from August 2015 now too. Notably lake west of lyndale. I only noticed because it has all three corners with vacant storefronts there.

Based on past behavior, the new imagery should be rolled out to (browser) Google Maps in a few weeks or so, though perhaps it takes a little longer now with the whole 3D rendering deal. As others have said, the 3D buildings/trees/etc were actually based on the 45 degree imagery, so they would have to have flown that at the same time. In the past, Google's top-down images and 45 degree images have not appeared to be from the same dates...so we'll see.

Note: the capability to capture 45 degree and regular top-down imagery from the same plane, at the same time definitely exists. It has just been my observation that Google's were not necessarily synced up in the past.

My street has new streetview imagery from 9/2015. Seems like they're going for a yearly streetview sweep now.
Post Reply
239 posts