Ladies and Gentlemen, I give you the first Google Maps image of Allianz Field under construction:
https://www.google.com/maps/@44.9530755 ... a=!3m1!1e3
Buildings, what buildings?

Saw the map of the field the other day. It definitely looks cool. Still looking forward to seeing more apartment development around the stadium.

I saw that the Flyover Tour of Minneapolis was updated recently. It’s much better though I still would have included a camera fly through of the Midtown Greenway, and maybe the Basilica and the Walker or MIA...

However, I was extremely pleased to note that Saint Paul finally has their own Flyover Tour also! I think it’s a bit better than Minneapolis’.
https://twitter.com/xeoth/status/1129933786970546176

I screen recorded the Flyover Tour for those who don’t own an iPhone or iPad. Enjoy!

quick question... are the "satellite" images actually from satellites or could they be from helicopters? Last Friday there was a VERY low flying helicopter flying back and forth over my neighborhood. It moved slightly north on each pass. To me it seemed like it could have been updating the aerial photos of the neighborhood.

I just checked the aerial view and they are at least 3 years old. The prior owner's hot tub is still in the backyard.

Not directly helpful: I am aware of commercially available images taken by both airplanes and satellites. Haven't heard of helicopters being used, but don't know why they couldn't be. Also have no idea where Google gets there's (don't think it's from the plane/satellite sources I'm personally aware of).

Depends on the elevation it’ll be aerial photos or satellite. You will sometimes see the satellite images update at different times than the aerials.

Depends on the elevation it’ll be aerial photos or satellite. You will sometimes see the satellite images update at different times than the aerials.

Yeah, not only is that level aerial imagery, in the satellite mode there’s the 3D option, those planes also are using aerial lidar at the same time.

Google Maps, Hennepin County aerials, etc. use specially-equipped planes for the zoomed in imagery, not satellites. And yes, they get special permission to fly lower than other commercial aircraft.

Apple Maps recently completed the roll out of the new Map dataset to include the Midwest and much of the Southeast US, now giving complete full coverage of the full US. What does not appear changed or updated is the aerial imagery, just the vector map.

Supposedly in the new dataset include updated points of interest that were grabbed using the Apple Maps cars that might have been seen.

A few month back I noticed that while St. Paul finally gained its own Flyover, though the 3D imagery dataset of the Twin Cities hadn’t actually updated. However it seems the updated data includes, when viewed in map-mode, tons up updated 3D models that appear when zoomed in far enough, including 3D building stand-ins all over the twin cities that weren’t there before the updated data. Likely the 3D models came with the Apple Maps Cars driving Lidar rigs around. The 3D models now seem to appear when using Car Play for turn by turn, helpful for landmark recognition while driving.

It doesn’t seem the much-touted Look Around (kind of an improved Streetview) does not exist for many cities, including the Twin Cities, yet. I’ve found it in the Bay Area (surprise) and L.A. Few others. I hope Look Around comes to the Twin Cities sooner than later.

There's new Google Earth imagery from 6/2/2020 and various other dates in the suburbs. Pretty cool to see what's going on downtown, aftermath of the riots, the airport, etc.

Hennepin County (Interactive Property Map) has 2020 aerials up too. I don't think they've ever been updated same-year, certainly not this rapidly. The image is kind of dark and brown though, like oversaturated or something. 2018's were taken too late in spring, leaf-on, so quite a bit of detail was obscured. They should strive for each update to be as similar to 2015's as possible. Flown in late winter / early spring, with the snow completely gone but zero leaves on the trees.

I'd like to see Google Street view take 3D images for viewing in VR headseats. The birds-eye views are absolutely stunning in VR.

You can zoom into the them for street view! 3d images would be awesome. I loved Google Earth VR, it felt like I was looking a my own miniature globe.

Bing Maps has some imagery for the Twin Cities that looks slightly more recent than what Google Earth has and is in noticeably better quality.

It's from mid-June of this year... 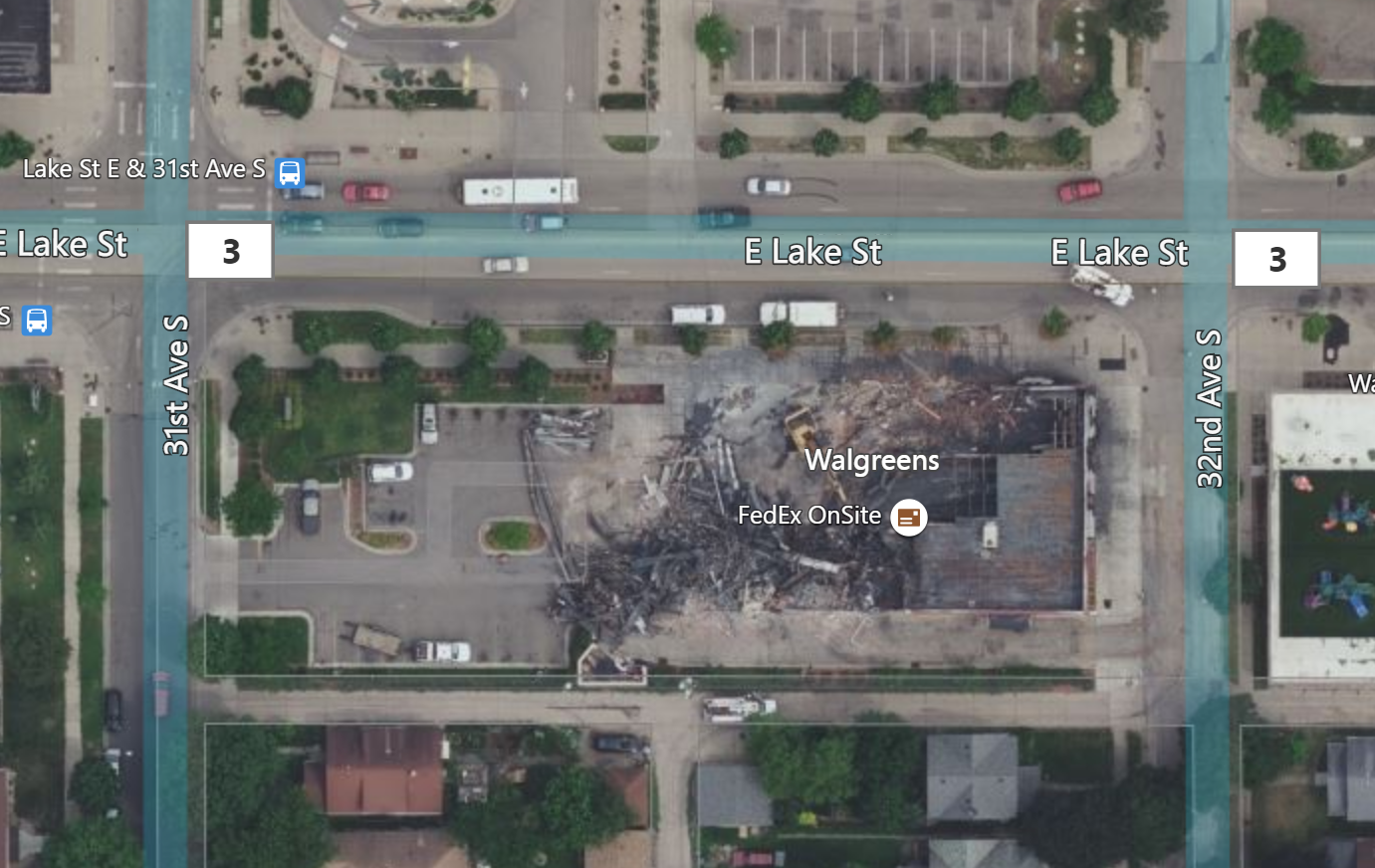 Google Earth has imagery in the Twin Cities dated 10/9/2020 now. It's quite a bit higher quality than the June imagery.

Are the Google Earth aerial images different from the ones used in Google Maps? I'm admittedly a bit of a novice when it comes to these mapping services, but is there a way to easily tell the aerial imagery date when using Google Maps?

Google Earth has all the latest updated imagery as well as the ability to look at old imagery. You can download the "Pro" desktop version for free.
https://www.google.com/earth/versions/