Man, I realize I'm gonna sound like a dinosaur for saying this, but 5e is good enough for most stuff. It can handle 1Gb which is plenty fast. I think in a home consumer environment, there isn't going to be a need for much more speed. With mobile devices and such, there's more focus on making the files smaller, so you don't need massive bandwidth.

Also Cat6 is a pain to terminate, if you're doing it yourself. Though I guess I don't actually know how to terminate Cat6 on a punch block or a jack, just in a cable (which sucks). There's a plastic X that runs through the core of the wire, making it a pain to work with.

But I guess in the context of the conversation, run Cat6 through the walls, why the hell not. Depending on the size of the floorplate (a 1/4 block skyscraper could get by with one network closet per floor, a megablock might need 2 or more) a network closet on every floor, fiber to connect the floors, a single Cat6 or Cat6a run to each unit, and then in the unit run Cat6 from that single point to all the other jacks in the unit (yes, ethernet in every room).

I have an apartment and I poked holes through the walls to run ethernet cables (with the landlords permission) because it's faster. Wireless works for normal browsing and downloading files (because the internet is slower than the wireless) and such, but both my media centers are hooked up via ethernet, and I have an ethernet cable I can plug my laptop to in the living room if I need to move big files around from my laptop to my server or vice versa. I'm obviously a power user though. My mom built a house a few years ago and we put structured wiring in every room (2 Coax, 1 Cat6, 1 Cat5 in each jack, at least 1 jack per room) and she says she basically only uses wireless now.
Peter Bajurny
peter@bajurny.us
@FISHMANPET

New runs should be strung with Cat6 or even better Cat6a, but not Cat5. Cat5 is defunct.

I just had my entire house wired with ethernet as part of the finishing-the-basement project. My electrician (!) pulled cat5 everywhere when I specifically asked for cat6. "What's the difference? It's all the same wire." *sigh* Thankfully, it's all cat6 now.

I've actually been thinking long-term about doing something like this. The question I always come back to is, "why isn't wireless good enough for inside the house?" Right now, I can't think of a reason. I'd appreciate your perspective.

I guess it all just came down to future proofing and not wanting to ever have to open up those ceilings again if at all possible. We had easy access to every single room on the main floor and half story without having to go through a finished ceiling. Was it overkill? Yeah, probably. But I like knowing that it's done. If the basement had already been finished, I definitely wouldn't have had all that ethernet cabling done.
The problem with being an introvert online is that no one knows you're just hanging out and listening.

I've run over 50 catv and cat6 drops in my house. Overkill? Yeehaw.

The only way to truly future proof a home is to run conduit through all the walls so you can easily pull new wires if you need to.

But with my mom's house, the reason we put so much in each drop is it was essentially free. The cable itself is trivially cheap, and the effort to pull 1 cable vs 4 is virtually the same (we pulled all 4 cables at the same time).

But 50 individual drops, that is crazy man 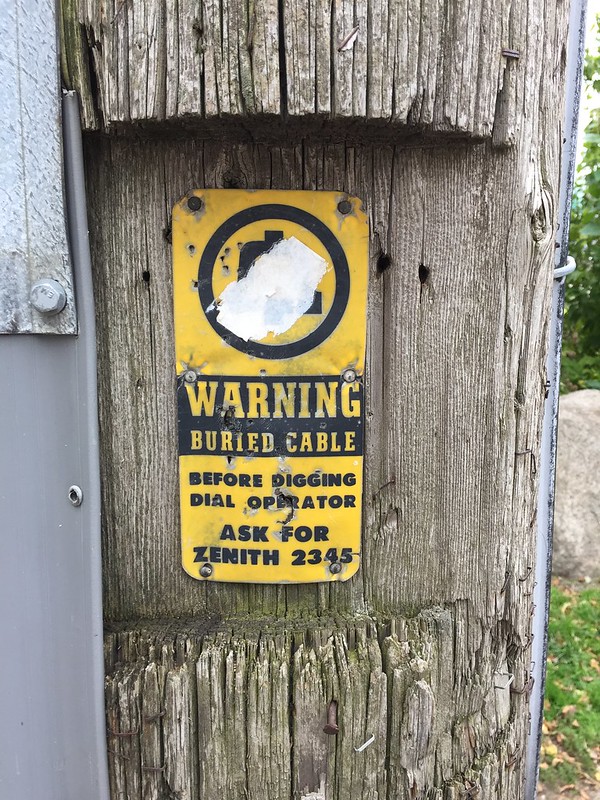 Nick that picture is so awesome. Is that sign somewhere in the city?

Saw a couple fiber optic cable signs east of 26th along the Greenway. Is fiber available in Longfellow or Seward?

Anyone have any inkling about USI's 2015 build-out plans? The only pending/under construction indications on their webpage is Lowry Hill. I really hope they reach our house before CenturyLink.

I saw this in the Star Tribune re: CL's offering tv service. Does anyone know where at the moment this is available?

"..The company has begun to offer 1-gigabit download speeds — the fastest available in the country — to some areas of Minneapolis..."

I've heard that its pretty much only Como right now. Makes sense as a place to start, as that neighborhood was probably on 70-year-old copper until the upgrade, and houses full of college students use a lot of bandwidth.
Joey Senkyr
joey.senkyr@outlook.com

Daaaaaaamn. I mean, gigabit is already hilariously overkill for >99% of residential users, but that's a cool thing to have available. Now if they could just expand north of 94...
Joey Senkyr
joey.senkyr@outlook.com

Real talk tho, I'm switching to USI when I move in February (ditching Comcast). I don't game online, but I do like to stream Netflix in HD, just one device at a time (because it's a 1BR apartment).

If your biggest need is one Netflix HD stream, then the 25 Mbps is quite adequate. Also, if you decide to upgrade later, or downgrade if you start at 50mbps, it is super trivial to change: just call the customer service line and you'll be changed within minutes.

I really hope that this ends up accelerating CL's fiber roll out in Minneapolis. Competition can't come soon enough, and i'm not holding my breath for USI fiber in Northeast anytime soon.

Here's another article that claims they're also working on 40Gbps and 100Gbps:

I'd rather have them focus on rolling out 1Gbps fiber (or less) to new customers at a faster rate. Maybe it's just because I've been anticipating it too much but it feels like it's rolling into new neighborhoods at a snail's pace.

I totally agree with you there, but I don't think the speed upgrades should slow the process of getting fiber in the ground at all. I assume that's on hold for the winter anyway. Given that 10gig is pretty much only useful for bragging rights right now anyway (Newegg doesn't appear to sell any 10gig networking gear), maybe it's going to somehow help with financing a faster rollout?

EDIT: Newegg does sell 10Gbps stuff, of course, but I was referring to consumer-class stuff, not rackmount managed switches and the like.
Last edited by Silophant on December 23rd, 2014, 1:26 pm, edited 1 time in total.
Joey Senkyr
joey.senkyr@outlook.com

jw138, as indicated the story you linked to, higher speed offerings do not really impede the fiber build out deployment. The same fibers can deliver 10-megabit or 100-gigabit equally well, it is purely a matter of what electronics you connect to each end. That is essentially one of the two beautiful aspects of fiber, the other being distance/range.
Post Reply
643 posts