by intercomnut
The Washington, D.C. Metro will shut down completely this Saturday and Sunday due to a snow storm, in a move described by the agency as "unprecedented."

by seanrichardryan
I imagine their trains don't have sanding systems for the above ground portions of track.

Are there any river crossings that a gondola would work in the Twin Cities? Maybe the Mill District (on either side of the Gutherie) to Main Street SE (near Water Power Park or 3rd Ave SE)? 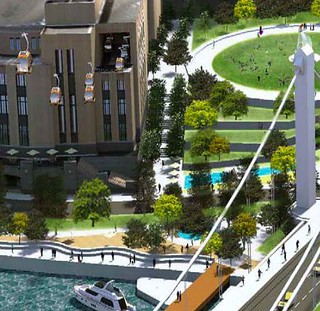 by EOst
Flew into Reagan this morning, drove south around 4. Traffic was insane (it helped that we were a carpool) and you could easily tell that things were disrupted. A lot of the tourist areas seemed very dead.

I saw a Silver Line replacement bus once I got downtown, but there was zero signage at Reagan for stranded travelers. The taxi line was intense. (I took an Uberpool.)

by Anondson
Washington D.C. Metro board reluctantly agreeing to proposal to drop evening service because 40 years of neglect has left the system in such a horrendous state of repair it isn't really possible anymore to even catch up with basic maintenance, much less fix bigger problems.

I hope this is used as a good example on how to not let a city rail system fall apart.

by intercomnut
Let's remember this every time we want to complain about one of our rail lines being shut down over the weekend.

by Anondson
To save Washington DC metro from its death spiral, should the Federal government take it over?

Filling its governing board with finance, transportation, management pros instead of politicians.

by ord2msp
This video touches on recent development activity occurring throughout the city.

by Anondson
There was SO much construction around the city. Everywhere I went.

by Anondson
Late night service to be cut for two years after all.

by Anondson
Because the Metro system missed a deadline to setup a safety oversight commission, the Feds are fed up and are going to withhold money.

by Bakken2016
Purple Line in Maryland outside of D.C. is upheld in appeals court. What a great day for the people of Maryland.

by Anondson
D.C. has a law blocking full service gas stations from closing. They can never be redeveloped.

There are lawsuits.
All times are UTC-06:00
Page 2 of 2
Powered by phpBB® Forum Software © phpBB Limited
https://www.phpbb.com/