what is the issue here. I've walked across the bridge.. it's perfectly fine. the entire plaza feeding into the commons park is great and such a vast improvement to this end of downtown.

My wife and I had a lovely dinner on the sidewalk patio of Zen Box Izakaya last night, and after dinner we walked over to check out the Commons park. I have to say, while I really disliked the aesthetics of this bridge coming in on the light rail, it really makes perfect sense in the flow of the park.

If you're coming from downtown, or even just the park, and planning on going in to the stadium, it feels like the obvious way to do it, and doesn't seem at all awkward: 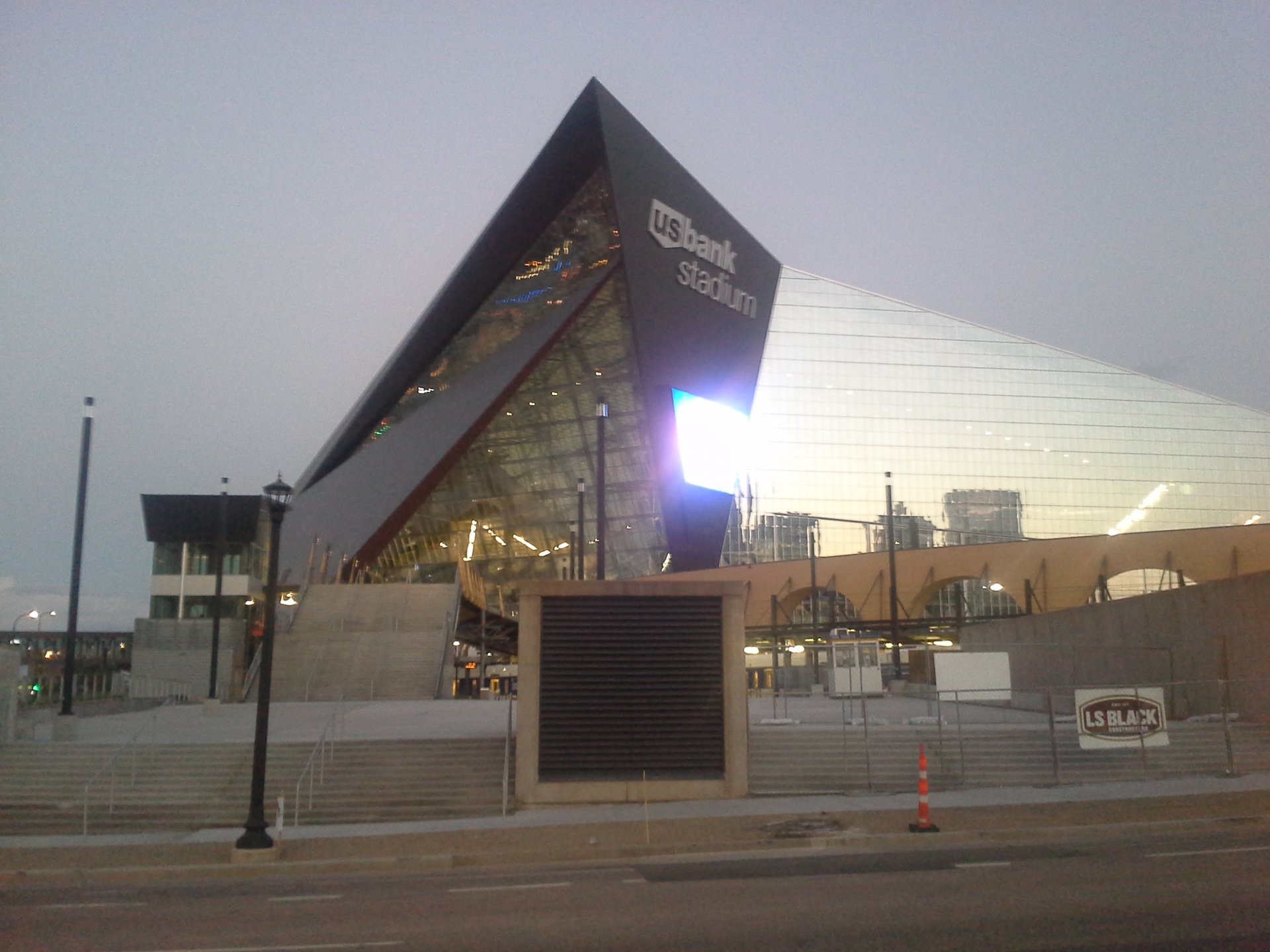 Also, I got this shot of downtown across the park at sunset, from the top of this bridge: 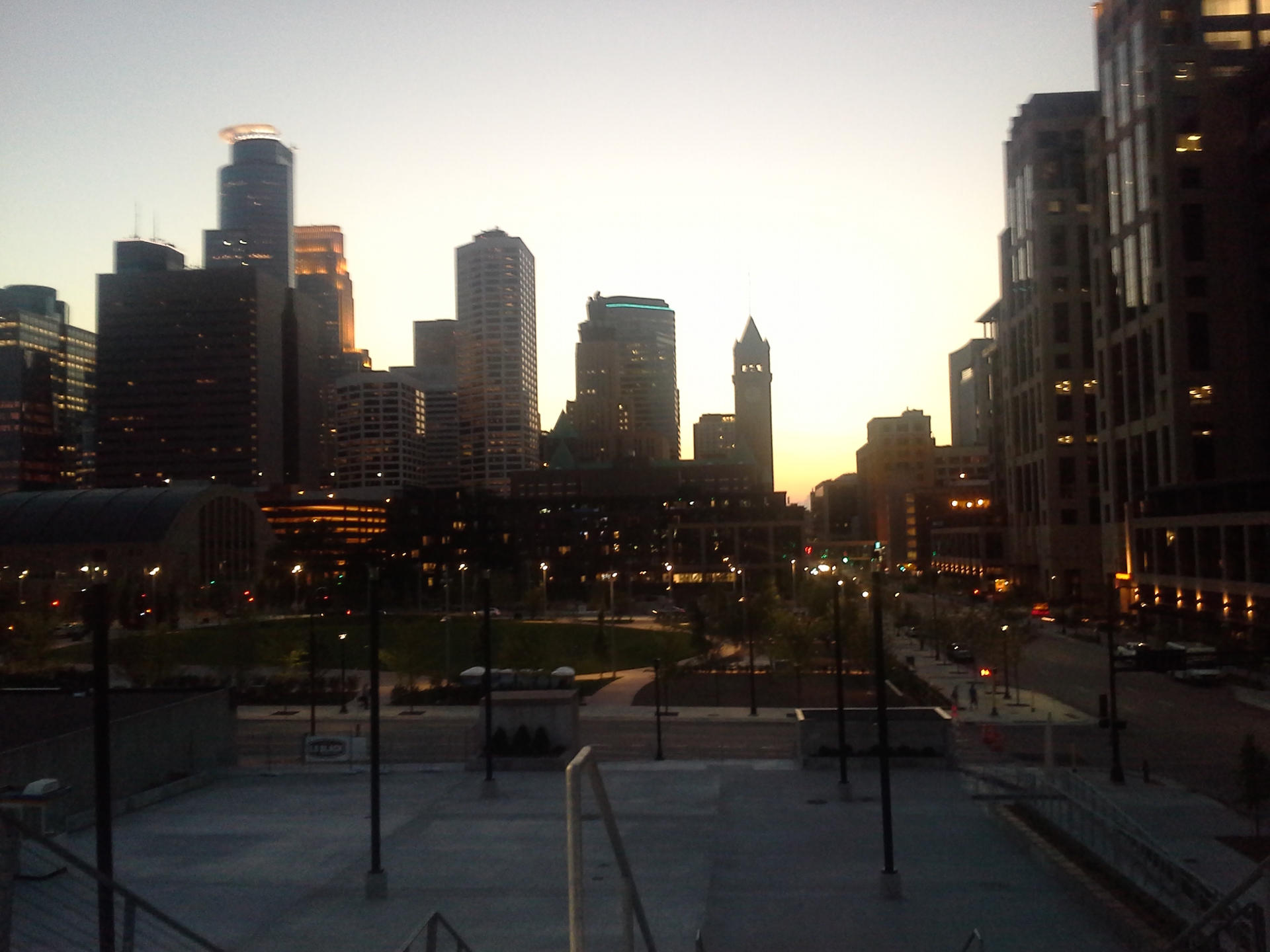 It's a camera phone picture so nowhere near as good as a real camera, but the framing at sunset was pretty great.

and doesn't seem at all awkward:

I do weep for all those displaced from Downtown East's former surface parking lots.

the entire plaza feeding into the commons park is great and such a vast improvement to this end of downtown.

The plaza is a huge disappointment. We've got a several square-block sea of open concrete. Woo hoo.

A city with concrete? Well, I never...

Only concrete (and light poles). They didn't even spring for trees. Or benches. Or even a different color/pattern of concrete. It's a billion dollar stadium with a 10¢ front walk.
The problem with being an introvert online is that no one knows you're just hanging out and listening.

It's got the feeling of a people's square in China. A big blank space of nothingness flanked by a colossal building to remind the citizenry of omnipresent power of government.

All dat concrete do'.

Being serious for a second. That picture highlights the exact problem with this block plus the stadium. It is two colors: black and gray. Everything else is just shades between. It's oppressive and bleak. It's cold and overwhelming. There is no sense of welcome, no colors, and little to no greenery from this vantage point forward to the doors. Too bad really. Kind of a waste of money. The designers lost the battle on this one.

For those just joining the conversation, TL;DR is as follows:

The design elements of a pedestrian bridge...

(which connects to a stadium wherein men [mostly of color] will be required to give each other traumatic brain injuries as a form of mass entertainment, built to help facilitate the translation of the collective symbolic value of Downtown East into monetizable exchange value in the real estate market, and, eventually, perpetual rent-based wealth extraction that in theory will offer steady ROIs to investors despite providing only negligible tangible increases in overall production or employment levels, as well as due to a lack of viable alternatives for sustaining a construction industry and full employment under the reigning politico-financial system–a politico-financial system which increasingly relies on [displacement-driven] speculative real estate hocus-pocus in order to fulfill its growth imperatives and mitigate its fundamental crisis for a few more years, and which has global environmental catastrophe as its teleological horizon)

...may or may not reflect VERY poor foresight by planners.

This may be my favorite post ever submitted to this forum. Truly excellent. Cheers.

On a related note, time to pack up this forum so we can all move into remote locations to become subsistence farmers/survivalists in the short time left to prepare for armageddon. Anyone know how to print this whole forum out so that I can take it with me and archive it for the aliens when they find my encampment/bunker many millennia from now?

Why bother with mathematical trifles like 40% when it is easier to accuse people of whining?


and 2) that you were in favor of the stadium,

Important distinction: I was in favor of building a stadium even if it meant SOME public investment. The public investment was too high but the Wilf's had a lot of leverage. Knowing that the public entities didn't have leverage, they should have been looking for ANYTHING to create some bargaining points - getting people to the stadium safely was a big lost opportunity to create leverage and build a quality transit stop and circulation.

In case you missed it from my lengthy reply:
"Sorry to create cognitive dissonance for you but it IS possible to support things in principle and not love EVERY single aspect of that thing."


I stand by my comments.

It's a free country (for now).


The idea that the MSFA and Vikings should have to completely re-engineer an existing functional facility at substantial costs amounting to multiples of what the bridge alone costs in order to meet an idealized "perfect world" vision is interesting.

Just to be clear: You have backpedaled from 100% bought and paid for by the Vikings to an admission that it was actually only 60% but you are still offering trite, food related burns.


Also, do your own research on the planning studies.

Yeah, why should someone making very assured and specific claims (and accompanying burns) which are then found to be off by a mathematically insignificant 40% be expected to supply evidence to support other claims? I've made an argument with support and you have made claims; I'll leave the value of this bridge to the opinions of others. The Wilf's aren't going to write that check to the Met Council so it doesn't matter - your side won.

However, I do think that this bridge should trigger difficult questions and increased scrutiny on the Met Council but I'll take those arguments over to another thread that isn't exploring issues that solely benefit the NFL and their owners.

I suspect that the current state of the plaza is the minimal "dry run"....and I bet that over the next years it is likely there will be changes and additions...and probably sponsored additions. This is just the get it done in time on budget version. Just like the park across the street. I am glad that they have at least leveled the ground on the entire space...much less chaotic that way.

Today the plaza has several trucks including a semi parked on it and setting up stuff for the soccer game tonight. I also remember that they wanted to use the plaza for tailgating and other fan zones. That's probably why you don't see any trees or green space there, function over form.

I haven't even seen the finished product and it sounds bad but the main reason that this is so barren is because it will be entirely populated with tents, temporary structures, temporary signage, US Bank credit card sales booths, etc or, as the NFL calls it, "Gameday Experience" The NFL's ONLY concern is how to maximize profits at their locations. Large expanses of cold, hard, plain, cheap surfaces are the perfect setting to sell, sell, sell!

I feel like I've made all of the arguments that I have the energy to make above but as I said (exhaustively), the public should have been looking for ANY leverage/negotiating points on this project and this is another lost opportunity. "We" should have negotiated high quality materials, plantings, etc and obviously it didn't happen.

Yeah, it looks less like a vast wasteland today, set up for the event: 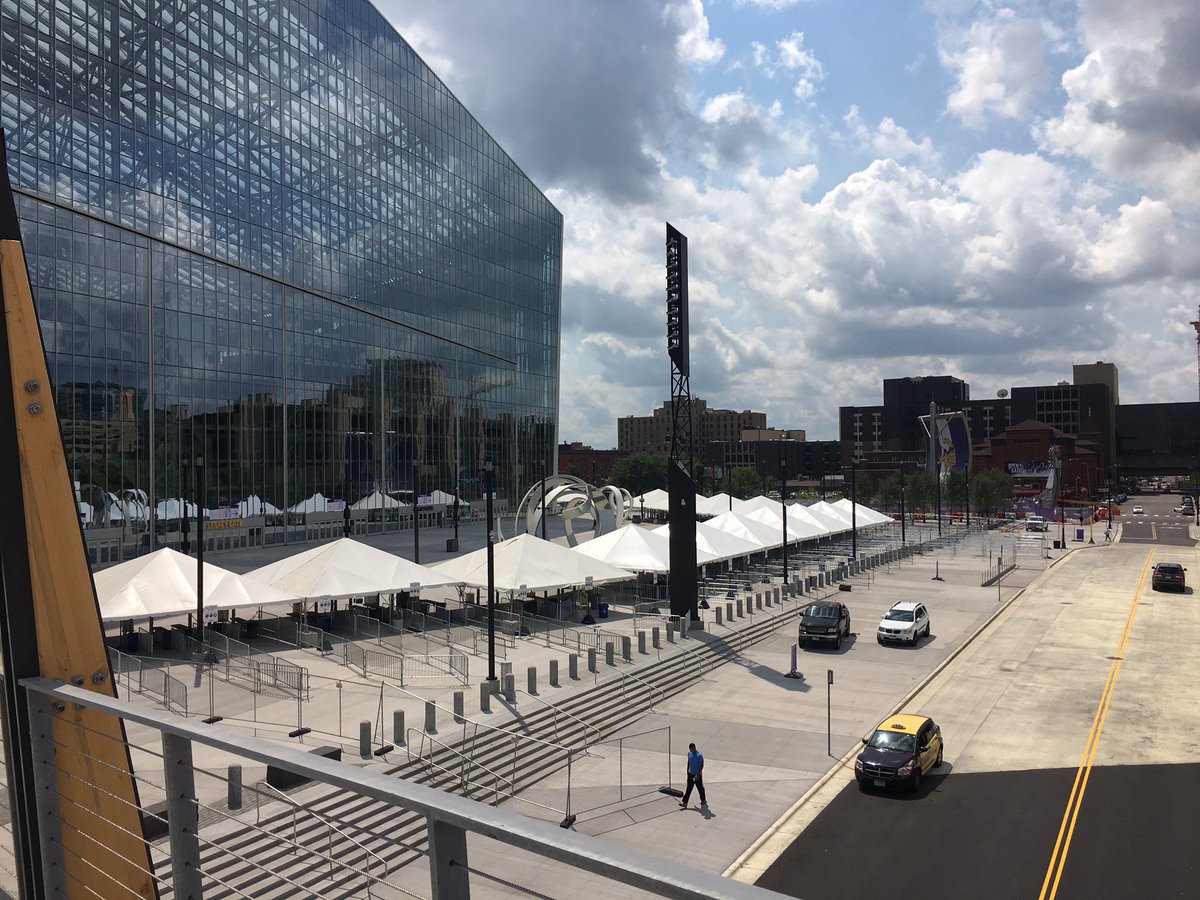 While I agree with you that this is annoying - do you only complain about it on this forum, or do you contact the City? Seems to me that if they planned to have the bike lane blocked regularly, that should have been discussed a long time ago (perhaps it was?). And not discussed on here, I meant at City meetings or MSFA meetings or whatever.

Sometimes it feels like too often people come here to point out something, bitch, moan, complain, etc., with very good reason, and usually with a very understanding crowd. But none of it will ever change reality - if the correct channels aren't followed to air the grievance(s).

I have not complained to the city about conduct I've assumed but not actually observed by a tenant on land owned by the MSFA. I may in the future if I actually observe said conduct, but I'm also willing to given them a few events to work out the kinks.

Why wasn't the security perimeter designed into the building/ plaza? Seems odd to use temporary structures for something that is required for anyone to actually use the building. All that chain link was noticeably absent in the flashy marketing flyovers.
'Hey, come on over and wander in though these giant doors' 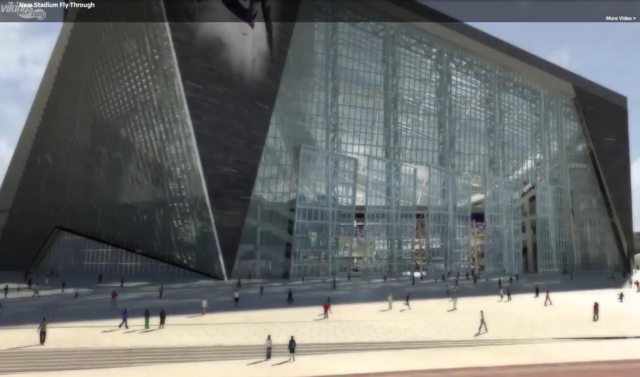