Wow, so much love the E175. I must have it crossed in my head with a different tiny jet. I just know that tiny jets with no headroom and lower cruising speed make for long uncomfortable flights for tall people, but maybe I'm confusing the E175 with a different Embraer. I schedule flights to avoid Embraers.

Will have Alaska, Delta, United, and Sun Country on SFO-MSP. Supposedly, Alaska will be twice daily. United uses smaller E175 jets, but will go to larger mainline during the peak summer season.

Heard a rumor that this new service will be on Virgin America not Alaska.

The Embraer 145 is indeed an awful plane.

Alaska has said they won't make any official decisions until early 2017 regarding keeping Virgin separate or rolling them up under the Alaska brand.

I forget, is it 14 gates now? So there are still a few unused? *ahem* jetBlue! *ahem*
My flickr photos.

Sort of. My understanding is Gate 13 is 13a and 13b, so it is like having 14 gates. But, on the mspairport.com T-2 map, it does list 13 and 14 separately. Have not been in the terminal lately to witness, however.
To correct my earlier statement, Southwest is likely using 9-13 then and 14 is available. Sun Country is 1-8. However, when not busy, SY is not using 1 and 2.

Weird selection, but I'm sure it makes sense if I looked at Southwest's hub and spoke system (even though they're not a "hub" airline).

Morning departure from MSP catches plenty of connection opportunities in Nashville. Return to MSP is evening so it acts as a connection back. Nashville has around 100 daily departures this summer on Southwest, while MSP is at 27.

Nashville wouldn't otherwise have been my top choice to add, outside of the connections. LAS has the most passengers for a destination not served from MSP by Southwest. Orlando and Dallas are also up there. Nashville is quite low, per T-100 market passenger data. Perhaps this is an "if you build it, they will come" idea.

Orlando and Vegas are both served by a lot of terrible low cost airlines (including weekly seasonal direct service form small Minnesota markets), so I can see why Southwest wouldn't want to waste their time and money getting beat up on those routes.

I still really wish we could get the Houston or Dallas non-stops, because that would unlock a lot of great connections. But Nashville is a good add, so happy with that.

Awhile ago I had asked if anyone knew more concrete information regarding MSP's ongoing redevelopment and improvements to the airport, and I was able to find a couple of updates from their webpage:


That answers most of my questions about airport improvements, with the notable exception being what (if anything) is happening to Concourse G. I think I saw a diagram about it here, but in that diagram it shows MSP having an extended Concourse G (or possibly renamed) to essentially mirror what's already on the Concourse A/B side of the airport, with multiple added gates.

Does anyone know if the concourse expansion is eventual, and if so, in what time frame? Is this just beyond their current scope of projects?

Two general points of feedback:
1. It's sort of a shame that the "landside tram" isn't being extended to the hotel, under the new parking ramp and under the existing post office. That would help provide better landside connectivity - for example, landside access between hotel and LRT (and T2 by extension). There are already plans to extend this landside tram in the future, so why isn't it happening now?

2. The new parking exit plaza seems like a total waste of space, just as the existing one is. Is there not a way to use the bottom level of a parking ramp to accomplish that function?

In more general terms, I think the current location of the post office complex would be an excellent location for a second primary curbside area for T1. Instead, they are planning to do a curbside oriented lengthwise along Concourse G when that is expanded and international arrivals are reconfigured. The current plan seems to use space inefficiently, since curbside space would eat into the constrained space between the parking ramps and the southern parallel runway.

Imagine instead if a new landside terminal was built at the Post Office location, oriented between the inbound roadway/concourse A/B/C and the outbound roadway/Concourse G. You could easily have curbsides on the east and west side of the building. The airside tramway would easily extend right into the basement of the building, with a station likely on the eastern edge in order to also serve the hotel and future eastern development. New skyways would connect the landside terminal to the existing concourses to the north, and to the extension of G to the south. 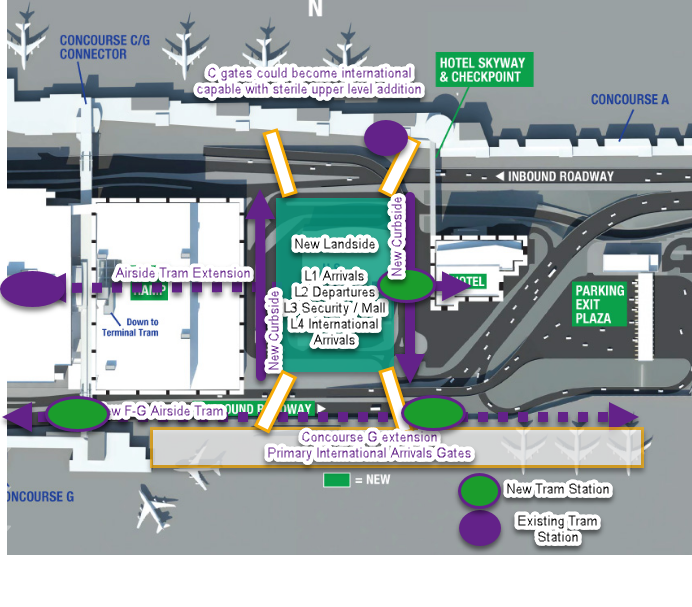 1. I'm also unsure as to why they're not extending the tram now.

2. The new parking plaza needs to be built somewhere else, because they'll be constructing the new garage at the current location over the course of the next several years. You can't have an operational payment zone underneath a construction site. And presumably the new rental car functions will be taking up the ground floor of the new garage.

3. I understand that the current post office site is being reserved for a potential future garage expansion.

Yeah, one more vote for why wouldn't they extend the tram now. So if someone wishes to stay at the hotel before an early morning departure from T2, they have to, what, take a shuttle over from the hotel rather than using the LRT that runs practically underneath it?
Joey Senkyr
joey.senkyr@outlook.com


HA...I don't know about not being able to afford staying at the hotel. I've often found Delta to be cheaper than Sun Country. Happens the other way too.
Post Reply
1274 posts