I half agree. If the line is going to someday have downtown express routes then i'd disagree, well kinda, if it's to downtown st. paul then it should remain red. Also it wouldn't be important to free up the Red line label until a looooooong time from now.. after the gold and purple lines are up and running maybe the next one after that is the pink line then yea. a rebranding seems like it should be discussed.

But right now, absolutely no way. MT is like a kid on Halloween with his first KING size snickers! Gotta wait until he has a few others before you can start taking one away so you don't crush his joy.

Somebody even mentioned we name ALL our rail lines with the same name to. Such as Northstar. then calling them by the destination such as St. Cloud , and Duluth. That idea is growing on me, although if we only have 2-3 rail lines then perhaps it might be unnessary. Although.. call me crazy, but having a "Northstar" train from Chicago to MSP... be pretty cool

I'm not the only one with that opinion about Northstar, but I've definitely shared it here before. It's a really good brand for intrastate/regional/commuter type rail, but makes more sense as the name of a system than as the name of a line. Once we get more than one or maybe two lines, it just becomes needlessly complicated to remember which cutesy name goes to which destination--"wait am I supposed to take the Northstar or the Northern Lights? Which one goes to Duluth?"

I doubt Chicago service would fall under that because even if we get a TCMC daily trip that's not part of the Empire Builder, it will still very much be Amtrak running and marketing it.

Circling back to this conversation, the Rush Line should obviously be called the Silver Line, not the Purple Line. If Rush claims Purple, we are literally out of 'primary' colors to name Riverview, let alone Midtown. Yellow is not an option due to the use of Gold, and I don't think anyone is really looking to copy CTA's Pink or Brown Lines...yuck. I guess there's always Maroon and Teal.

Beyond the (some would say silly) concern of running out of colors, Silver just makes way more sense as a companion to Gold, as they are both BRT lines running in similar exclusive guideways in the east metro. I get that they're trying to go for a Vikings thing with Purple and Gold, but the Rush Line doesn't come anywhere near anything Vikings related.

So please join me in urging the Met Council and Ramsey County to officially name the Rush Line as the Silver Line, not the Purple Line. (Note, the purple thing is kind of a rumor/hearsay right now, but they could propose to have Met Council adopt purple any day now...I just want to get ahead of that effort before it turns into a really stupid thing where a county commissioner's feelings would get hurt so we're stuck with purple because they wrote it on a napkin 4 years ago)

Per Monday's MetCouncil meeting the latest METRO map shows purple could go to either Rush or Riverview, so there is still hope it would go to Riverview! 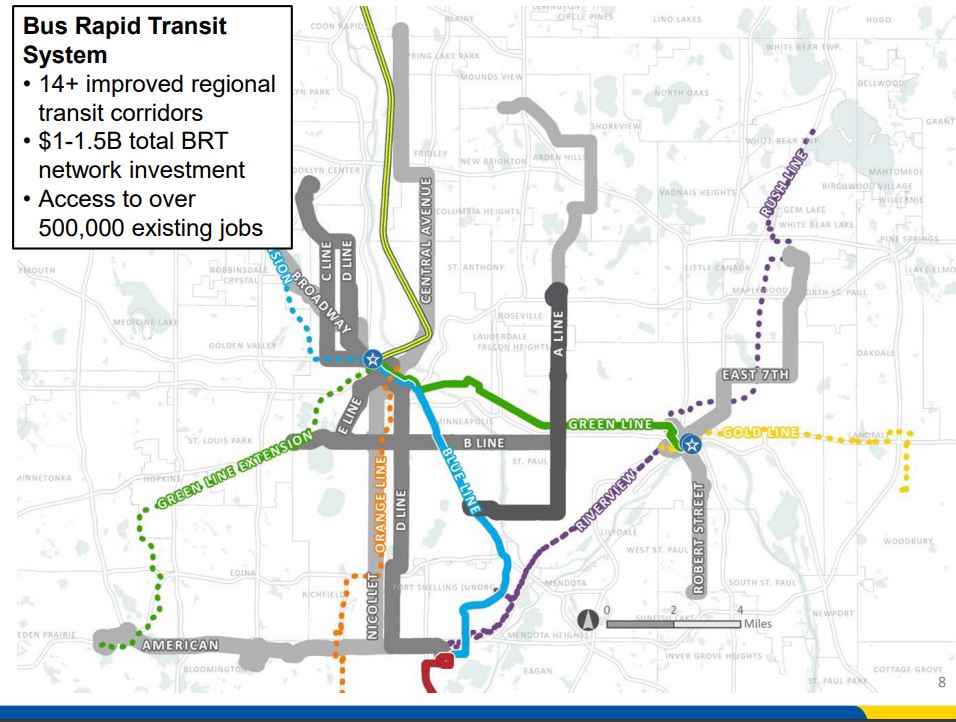 At one point there was talk of interlining Rush and Riverview. But I suppose that’s dead now that Rush is BRT and Riverview is streetcar.

At one point there was talk of interlining Rush and Riverview. But I suppose that’s dead now that Rush is BRT and Riverview is streetcar.

If they could have somehow gotten D Line to be light rail, ridership would be crazy.

What if the Gold line turns into the rush line at Robert street. With an added stop on the riverview line at kellogg to serve west downtown and the xcel energy center and what would have been the rest of the gold line.

This would make sense as they are both mostly exclusive right of way BRT. And it would save a color. Traffic that needs to go to west downtown st paul can transfer at union station to the green line or riverview line.

Even though it's not really stated in official planning documents, it's hard not to see the Gold Line is destined to be extended to Minneapolis in 8-10 years when we rebuild 94 with HOV lanes between the downtowns, replacing the current 94 express route. With Rush being a mostly exclusive guideway BRT, I bet there would be some resistance to pairing with a mixed-traffic aBRT segment such as Robert Street. But with Riverview being rail instead of bus, there doesn't seem to be a natural extension/pairing for Rush.

Im not talking bout the Robert Street South corridor. But when Rush line goes into downtown it arrives on robert street crossing the path of the gold line.

That would make sense to extend the gold to minneapolis although if we're having a second rapid transit line between mpls and st paul. I think itd be smarter to look at a nonstop service of commuter rail on the sane tracks that amtrak uses before turning into Target Field.

It would be faster then any express buses, and avoid traffic. We already have the light rail with limited stop service. Investing in something faster jus makes sense to make it nonstop

Yikes. Just about everything in St. Paul, from the A Line stop spacing to the downtown layout, is a huge mess on this map. Metro Transit needs to hire a consultant to do a better job before a map like this actually goes into service.

Also, the stop spacing on the Blue Line Extension... it may be geographically accurate, but man is it jarring.

The way they label transfer stations seems to be pretty inconsistent as well. For example all of the downtown minneapolis LRT stops are given a white bar, but nothing for the bloomington/airport stations where the blue and riverview interline except for the MOA. Same for pretty much everything in downtown st. paul.

Why wouldn't Central be included on that map? Any insight?

METRO Riverview listed under Light Rail and color black. I hope they embrace it as Light Rail vs "streetcar"

Rush Line should officially get the purple naming already.

Any mock up with the A (north), B (east), and E (N/S) line extensions that are being discussed?

Is it just me or is the biggest gap here the Roseville area? Draw a BRT line from Maplewood to downtown Minneapolis.

Looking at it, you can tell they're just forcing the new lines into the existing format. A fresh format designed to handle the whole region would be nice. hBRT on highway 36 would also be nice. (pretty please!)

Are the B and E line stops not labeled because they haven’t officially decided on them yet?

Its like northeast doesn't exist. Kind of amazing as towers continue going up across the river that the Met Council seems to not have a clue how to serve this area. Dead-ending the E Line at the Warehouse stop hurts my brain so much.

Also, the stop spacing on the Blue Line Extension... it may be geographically accurate, but man is it jarring.

I would label them as "34th St", "38th St", etc., and then put "Chicago Ave" vertically, along the line itself instead of the individual stops.


Per Monday's MetCouncil meeting the latest METRO map shows purple could go to either Rush or Riverview, so there is still hope it would go to Riverview!