A couple shots that show how this building is framing N 6th Ave and N 5th St. (Later shot also shows a side of the new Metro Transit police building, which was designed by Snow Kreilich.) 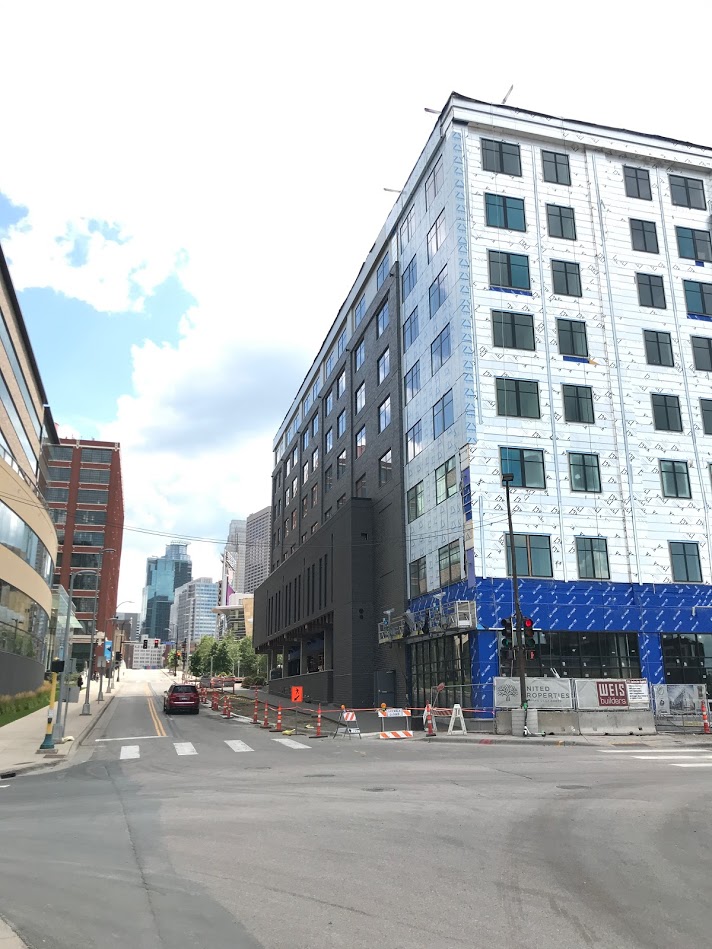 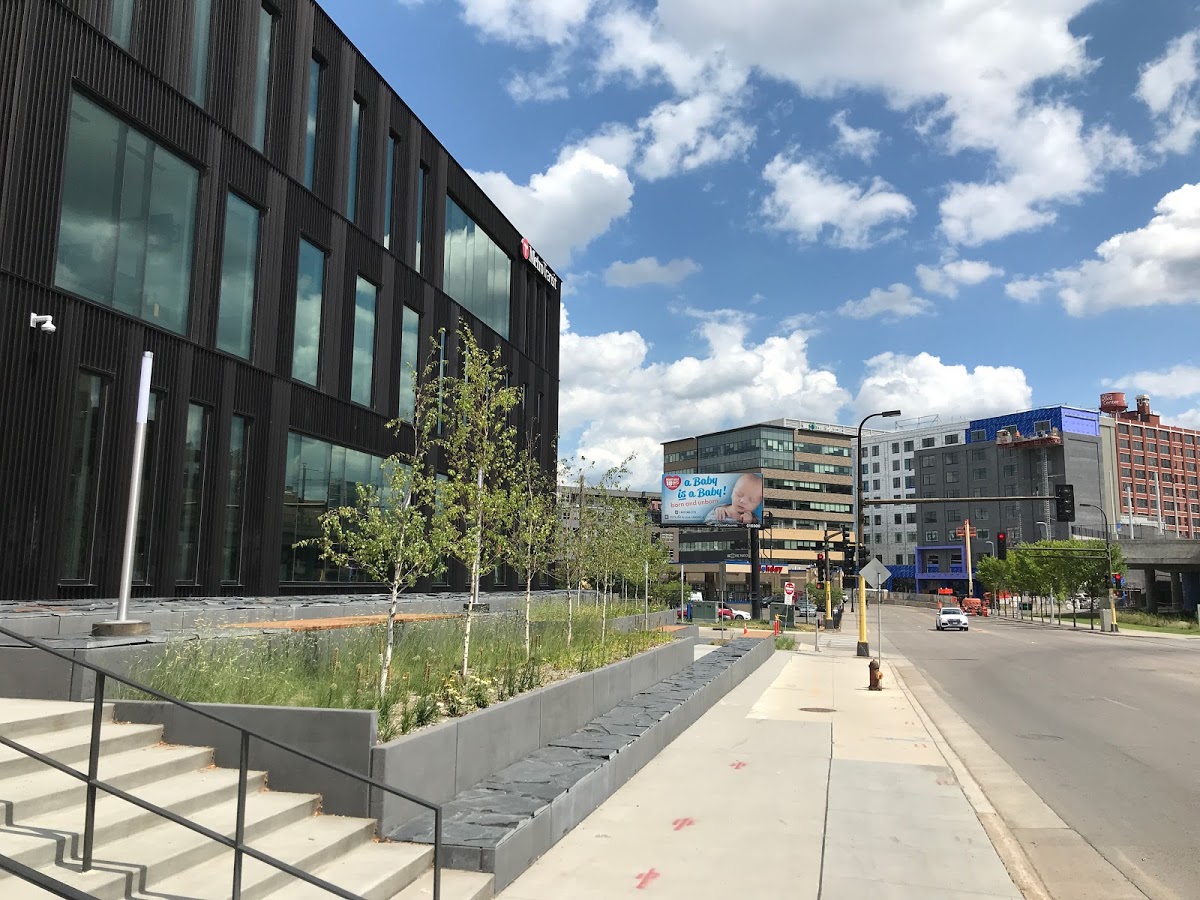 That Holiday can't be long for this world, can it?

It was only built like a decade ago, and I bet it does a killer business. Unfortunately that's why I wish we had a little more of a carrot approach for drive thrus and auto-oriented businesses. I could see it making sense for this to go up near 10th Ave N / Oak Lake Av on the other side of the Heywood superblock and a little closer to the freeway ramps. But, since we're now making it illegal to build new auto-oriented uses, these existing uses will now have a much higher reason to stay. If we had other mechanisms like cap and trade or "we'll allow a drive through in exchange for something that benefits the public" then it could be better off for everyone.

We used to live right next door to the Holiday at Junction Flats and that station is very busy. Plus there's no other gas station nearby for those folks that do live in the area but have to drive out of town to work (like we did).

I never said it wasn't profitable. But selling out to a developer can also be profitable. It's a prime location.

A smart developer could include a convenience store in a future development. There are also small-footprint urban gas station formats, which you see especially in Europe and East Asia. I'd be fascinated to see one in Minneapolis.

That last point, the one about a smart developer adding a convenient store to the bottom level of the building, is especially important to me.

I don’t live in the neighborhood, but when I do venture up there on the light rail, it’s always nice to know that there is a gas station fairly close to target Field Station. Not for the gas of course, I am blind, I don’t drive. It is nice having the ability to grab my convenience items right near the station. It’s too bad one of the smaller buildings near target Field Station didn’t include some sort of flex space, something that could’ve been turned into a convenience store once demand was there.

That Holiday is always crazy busy -- many times I've had to wait to get a pump, and the line for the car wash can sometimes exceed half an hour. It also clearly serves as something of a general store for the area, as you'll often find people stocking up on basics more often than a typical gas station.

Just hard to imagine it's going away any time soon. But I'd love to be wrong.

I thought they JUST built that Holiday gas station. We need to keep our downtown gas stations (Holiday North Loop, Speedy Loring Park, and Mobile behind the US Bank Stadium off Washington Ave.) I think we have just enough pumps downtown, a touch to less considering Loring's Speedway has only 4 pumps and it's a tight squeeze. For thoese of us who live downtown and have a car (even if we don't drive daily) it's nice not having to go outside of downtown just to get gas. Sure maybe it's not the most urban use of the space but, comfortable living is important too. Just saying.

That Holiday has been around for quite some time to my memory, but I totally agree with a couple points. We still need gas stations at this point as many people who live downtown still own cars. We also possibly shot ourselves in the foot with that law not permitting new gas station construction in Minneapolis. In a perfect world we would redevelop that Holiday into a mix use building with some sort of small convenience/grocery, as it's a prime location in a thriving part of town. Then we'd build a gas station a a little drive outside of North Loop for locals to fill up not too far away, but out of the heavily developed zone. With this law, we've probably guaranteed that Holiday will stay longer than we'd like. (Note I don't know a great alternative to the law, other than those who allow their gas station to be redeveloped into a mix-use development get a permit to build another gas station somewhere else in Minneapolis. Once we get adequate density, transit, and become a true car-free city then move back the original law.)

I tried to fill up at Whole Foods but they wouldn't let me....

I'm trying to remember where I got gas when I lived downtown. The most accurate answer is that I didn't do it very often because I didn't drive much. I guess I used the Loring SA/Speedway most frequently, but just as often stopped randomly when I was out and about. Considering that if I was in my car, I was going out of downtown, not having a gas station downtown wouldn't have really mattered.

This hotel is decent enough, but it is surprising that, at least in the renders - and so far in the construction, it is almost impossible to tell that there is a major performance venue contained within the site. Of course, that is something that could be remedied without major changes to the structure and if the line up of performers is right, the relative invisibility of the space may not matter all that much. Serious fans find what they are looking for even if the space is well hidden. Anyway, this is a nice addition to the neighborhood and the view corridor.

Does anyone have any current photos of the Metro Transit police building. This is a surprisingly interesting design.

This hotel is decent enough, but it is surprising that, at least in the renders - and so far in the construction, it is almost impossible to tell that there is a major performance venue contained within the site.

If this rendering is accurate, I think people will figure it out. Thanks, I had not seen this render. The entry is much more dramatic than anything I had seen for this before and the signage is anything but invisible.

Hotel and concert venue getting done. 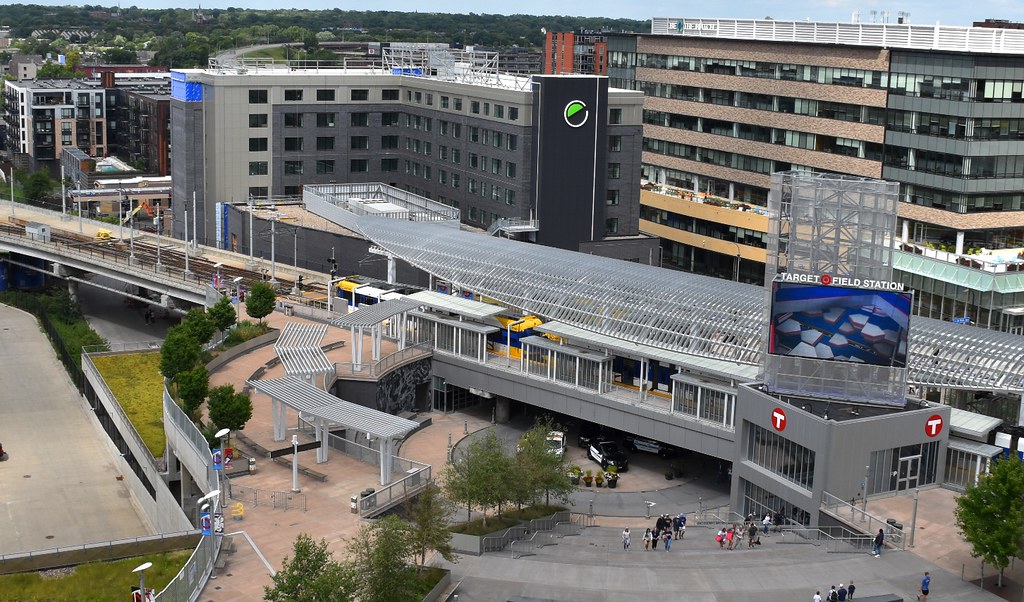